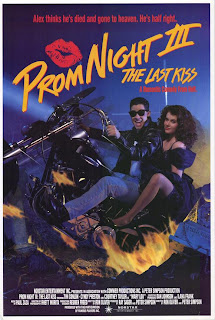 Have you ever seen somebody with such a terrible haircut you wonder what prompted them to get it in the first place? Has that haircut ever been made of lime green Jello with gummy snakes swimming around in it playing miniature saxophones? Well this movie is a little bit like that.

Prom Night III: The Last Kiss marks a less than venerable Canadian institution's descent into Direct to Video Hell, and with the concurrent drop in quality came a burst of incoherent colors and shapes that some mad intern seemingly decided to convert into a screenplay.

I know this opener makes literally no sense, but I just needed to get you in the right mindset to think about this movie.

Prom Night III starts off with as much normalcy as it can muster, opening with a singularly bland title card. It's literally just the name of the movie in plain white font. They really broke the bank on that one. And then. And then.

We are transported to some sort of Prom Hell Dimension where chained zombies do the can-can. Mary Lou files through her shackles and escapes, zooming through the halls of Hamilton High in a giddy Steadicam sequence straight out of Evil Dead that proves that these movies weren't quite done strip-mining other people's horror properties.

She lures a janitor into a boiler room (Phew, we're back to ripping off Nightmare. I'm glad they left Evil Dead well enough alone) with a juke box of all things and steps into the light revealing... she's not the same Mary Lou from before. Cassidy and I cry tears of sorrow. This Mary Lou looks like a cardboard cutout and talks like one too. No life. No joy. Only anguish and pain forever and ever. 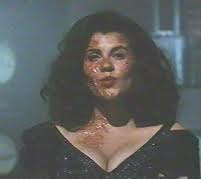 The eighth circle of Hell is the eternal duckface.

I apologize for the low quality of my screengrabs, but the movie is very low quality.

Anyway, she blows up the janitor's pacemaker and says "Mama always said I'd be a heartbreaker." Here it is, folks. The Prom Night series has finally gotten so desperate and strapped for ideas that we've reached the Quipping Point. You see, this film is a horror comedy, but what attempts to pass for comedy is usually downright abysmal, while the funniest moments can be leached from unintentional terribleness.

In actuality, it's totally my kind of movie.

Mary Lou Maloney is the only returning character in the entire five movie franchise, if you can even call her that. Mary Lou is virtually unrecognizable from her previous incarnation, both in looks/performance as I mentioned earlier, and in overall motivation and, well, everything that makes a character. Instead of wanting to be prom queen and bandying about her lady parts, she's content with stalking a cute boy and channeling late period Krueger. 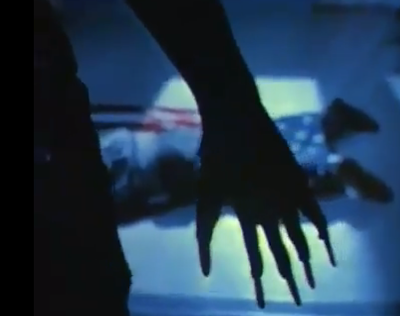 And you thought I was kidding.

Young Alex Grey (Tim Conlon) is your typical average American* teen (he has a monologue to this effect that actually channels the "Christmas sucks" monologue from Gremlins quite favorably). His final year of high school is drawing to a close, and he must decide whether to spend the summer road tripping it up with his best friend Shane (David Stratton) or staying on a farm with his shrewish and needy girlfriend Sarah (Cyndy Preston).
*Remember when I said that Canadian slasher movies liked to pretend they take place in America? Boy you're in for a treat.

Sarah and Alex get into a fight, and at a romantic candlelit drive-thru dinner he admits that he's stressed out because his guidance counselor told him his grades are too terrible to pursue his dream of medical school and he should just learn how to fry burgers now because that's how he's gonna spend the rest of his life. Sarah isn't very helpful because she's the worst, and when he goes back to school to collect his Biology book to study, he encounters Mary Lou in the flesh. Well, ectoplasm.

Like any normal pair of high school-aged strangers, they start making out, ripping an American flag off the wall and boning on top of it while the national anthem plays. America, guys.

Because she's apparently a Na'vi from Avatar who mates for life once they have sex, Mary Lou falls instantly in love with Alex and uses her magic powers to protect him, mostly by killing people who are hurting him, like his Biology teacher who flunks him or the guidance counselor who catches wind of his grades being altered.

The kill scenes are so utterly outlandish and bizarre that it seems like the screenwriter watched A Nightmare on Elm Street 5: The Dream Child and saw the scenes that were relevant to each character taking place on garish setpieces (an anorexic model is fed until she explodes, a comic geek is transformed into a paper drawing and slashed to ribbons) and only took away the setpiece part without realizing they all had something to do with the nature of the character being killed.

Instead of killing the Biology teacher with, say, a ton of animals or some weird hanging skeleton or whatever, she just jams her own weird-ass setpiece in there - in this case an ice cream parlor. 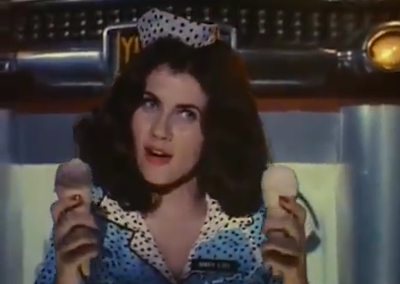 She kills the guidance counselor with a Battery Acid Hair Salon Torture Chamber™, shoves an entire 50's-era kitchen into a lab room, and even possesses a Sex Ed video.

The movie continues on like this for a while with Mary Lou killing to Alex's benefit in super ludicrous ways and him burying her victims in the football field, then boning her a little bit more to cheesy saxophone music. There's also a couple jump scares thrown in, almost like they think this is a horror movie.

The movie ends at a prom, when Alex finally realizes he should stop having people killed and breaks up with Mary Lou, who seeks revenge. The prom part is mostly only there because they must have realized the title of the movie and decided they had to include one in there somewhere. Although the ending is a solid ten minutes too long at least, there is a comic relief cop (Brock Simpson) who is the only element of the movie that's intentionally funny that lands at all. So hats off to him, a two time veteran of the franchise. What a depressing distinction. 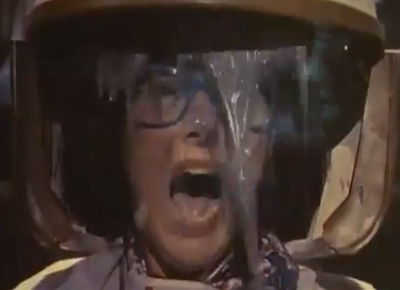 Although I guess things could be worse.

Prom Night III is the cheapest movie yet in the series and it wears that badge proudly. The DVD I was watching was clearly a bad VHS transfer with weird fuzz that obscured the image from time to time, and it's not even the actual film. The DVD is a ripped copy of the edited for TV movie that censors some of the language and nudity, neutering an already very uneven film.

The behind-the-camera work is particularly shoddy and anonymous, and I get the feeling the sound department entertained themselves by playing a private game called Boom Mike Apocalypse. I swear, there was a boom at the top of half the frames. The ones that weren't obscured by other means, at least. One shot has a small black cloth diagonally jutting through the top of the screen.

It's not well made. It's not scary. It's not funny. In fact, it's so dizzyingly incoherent that I can barely write about it without descending into primitive madness. But in spite of its massive problems, the careless low budgetry of the film lends it a vibrancy and life it wouldn't otherwise have, and the terrible acting paired with the cheesy quipping and inscrutable kill scenes all add up to a tremendously wonderful B-Movie masterwork.

Sign of the Times: The word "daddy-o."
Scariest Moment: I'm sorry, I don't understand the question.
Weirdest Moment: When Alex calls his parents on the pay phone at school, they sound like they're speaking in simlish. This is hilarious, and the turning point when you realize this movie has zero hope of getting any better.
Champion Dialogue: "Firstly, you really gotta stop killing people."
Body Count: 9