The Levy Was Dry 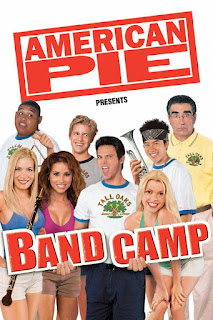 After running my marathon of the American Pie quadrilogy, a franchise I have no small amount of slightly abashed love for, it was inevitable that I'd have to run through the franchise's other quadrilogy: the series of direct-to-video spinoffs under the banner American Pie Presents. Why did it take me two years to decide to do this?

Well, see for yourself...

For one thing, the first spinoff is American Pie Presents: Band Camp, released just two short years after American Wedding, and it covers the exact same setting/regurgitated joke that we already saw in American Pie 2. When Stifler's little brother Matt (Tad Hilgenbrinck) pulls a prank on the high school band during the graduation ceremony, his punishment is to attend band camp for... reasons. Look, we needed a premise, OK?

Anyway, at band camp he vows to make the most of his time by secretly taping the geeks mid-coitus (ah the beforetimes, when sex crimes were oh so funny according to Hollywood screenwriters). But a wrench is thrown in his plan by senior student Elyse (Arielle Kebbel), on whom he has a massive crush. He is split by a decision: should he be a nice guy and help out the band he is slowly bonding with in their competition against the requisite rich snob team of campers? Or should he live up to his Stifler instincts and continue to be an insufferable asshole? 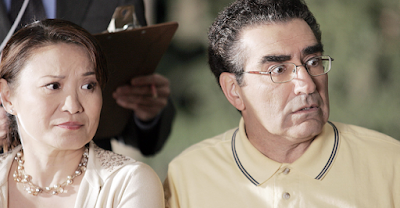 And also Mr. Levenstein is there, because Eugene Levy could use the paycheck and we need a better connection to the franchise than a cameo by the Shermanator and the song "Laid" by James, which is ALL over these spinoffs.

There is a lot of odious material in Band Camp, probably the worst - other than the rampant misogyny present in pretty much every sex comedy - being a grotesque racial slur that is dropped in out of absolutely nowhere. But the first thing to get to me was the scene where Matt purchases his snooping cameras online, shelling out at least $3,000 in one fell swoop. That's a truly obnoxious amount of money for any high school student to have, and it reeks of suburban white privilege that immediately puts you on the bad side of a character who barely even has a good side.

The reason Stifler was a standout character is because Seann William Scott is an actually good actor, and Tad Hilgenbrinck's watered-down impression of him only serves to highlight how we're not going to spend a single moment with this character that could possibly be enjoyable. At least he nails the Stifler laugh, so it feels like they could actually be related in some way, but his practical joking tends toward the straight-up evil, and his need to outdo the antics of his brother makes spending time with him absolutely exhausting. 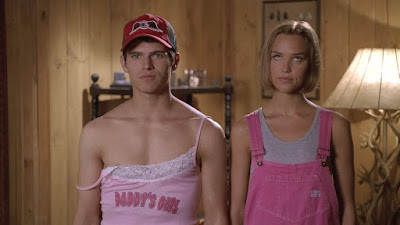 It's hard to fall for a protagonist wearing that hat.

And the comedy that actually has the capacity to be funny without being hideously offensive is just as outdated. Steve Irwin jokes were old even in 2005, but in 2019 there is absolutely no place for them. At least the fourteen year gap is one thing that isn't the movie's fault, though it probably should never have defaulted to such lazy zeitgeist humor anyway. It's not a Scary Movie spinoff or anything. And we should at least thank whatever deity you put your faith in for that.

One thing that's unequivocally positive about the movie (finally!) is that it has a bangin' soundtrack. I think the bands that agreed to be featured assumed incorrectly that it was an actual American Pie movie, but for whatever dubious reason we got it, we have Jimmy Eat World, Matt Nathanson, Snow Patrol, Good Charlotte, and Breaking Benjamin all over this movie. And whatever your mileage is with those various artists, they are bands that you've heard of and it creates a beautiful time warp back to the sonic landscape of the mid-2000's.

And I guess here's the part where we should talk about Eugene Levy, who is the only person you've heard of in any of these movies, and who will be our constant companion through the next three entries (that's right, they made four of these). He was pretty well cemented into his character's schtick at this point, so nobody could expect him to add anything to it, but it's at least consistent with the work he put in throughout the rest of the series. The script is not, so he blunders with the expected half-prudish, half-supportive awkwardness through situations that don't really make sense with people he has no real reason to interact with, but at least he's doing something. Right?

Look, I just need a reason to justify why I'm doing this, because the movies themselves don't seem to be giving me that quite yet. Band Camp is a wholly unremarkable, sometimes toxic movie that at least has a basic narrative thrust and structure. It's recognizable as a movie, even if it's not a good one, and that's something I'm going to hold onto as we dive even deeper into the pit.