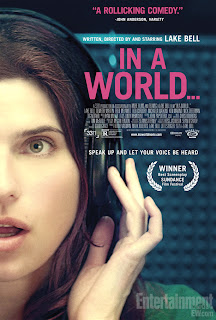 Modern women are still struggling to find a voice in a lot of male-dominated industries. In In A World…, Lake Bell’s Carol Solomon is struggling to sell her voice. The daughter of a famous movie trailer voiceover artist, she is having a hard time following his footsteps in the business, which has historically been a boys’ club.
However, after the death of number one voiceover artist (real person and coiner of the phrase “In a world…”) Don LaFontaine, a void must be filled. In honor of his passing, the trailer for the first film of The Amazon Games, a quadrilogy based on a bestselling young adult series, will resurrect his famous phrase for the first time under a different artist. Carol becomes embroiled in competition with young hotshot Gustav Warner (Ken Marino) and her father, Sam Soto (Fred Melamed), the industry veteran with a golden voice.
While the plot is just a variation on a story you’ve seen a thousand times before, In A World… offers a glimpse into a fascinating undiscovered realm – voiceover acting. This is an industry with its own celebrities, struggling interns, and even awards shows (The Golden Trailers, which I was fascinated to learn are actually a real thing) that the general public has almost certainly never heard of or even thought existed.
Lake Bell’s directorial (and writing and production) debut hits the jackpot with a world of fascinating characters and concepts that has been heretofore completely unmined territory. In addition to giving us a fresh look on an industry we often take for granted (as well as Lake Bell’s career, which up to this point hasn’t exactly been anything to write home about), the film is a wickedly sharp comedy with snappy dialogue, several actors and actresses turning in career best performances, and an unending sense of fun with a little bit of heart thrown in just for good measure.
Although Fred Melamed’s performance as Carol’s loquacious father is a little bit much for my tastes, Lake Bell and Demetri Martin (a stand-up comic who plays Louis, her coworker and love interest) are perfectly natural in their roles and run the show with their fabulous timing and interplay. Just what is it with comedians lately? First Louis C. K. shines in Blue Jasmine, then Demetri Martin blows us away. There must be something in the water at the Laugh Factory.
In A World… is a feminist comedy, but it won’t go down in history as the movie that changed everything. It is an iridescent soap bubble, absolutely beautiful and perfect for what it is, but likely to be fleeting in its overall influence. It is well-meaning and full of optimism for the way the tides are turning, but it is more content to play around than to deliver a hard-hitting message. However, that does not mean that it is not a superb film, and in fact it is the best comedy I have seen in years, definitely the best of 2013 so far. No movie in quite some time has been so continuously effervescent and laugh out loud funny with scene after scene packed with genuinely funny gags and lines.
Bell is a revelation, taking what could be a stock indie movie character and absolutely owning it, turning voiceover work into a fascinating tapestry of human experiences. The entire cast is clearly excited to be there, with a plethora of notable performances from main actors and bit parts alike. Nick Offerman turns in a hilarious performance as a crude recording studio owner and Eva Longoria proves she’s game in a role that’s essentially a parody of herself in possibly one of the funniest scenes of the film. I say “possibly” because the scenes tumble over one another in a tremendously lively script, each vying for position as the funniest thing you’ve ever seen. And they are, until you see the next scene. And the next.
Although the film sweeps one up in the comedy, it never forgets its heart. At its center, In A World… is a story of women stepping up and taking risks. They don’t always succeed, but that’s life. It breaks down traditional gender roles and boundaries and even a potentially cliché character, Sam Soto’s much younger second wife, comes into her own and takes charge in her own way. It’s truly heartwarming to see such a tender depiction of friendships, relationships, and women and men alike learning how to balance their independence, their love lives, and their families.
In A World… is the best comedy film available today, wide release, independent, or otherwise. But don’t take my word for it. See for yourself.
TL;DR: In A World... won't change the world, but it is a hilarious and heartwarming feminist comedy.
Rating: 8/10
Should I Spend Money On This? Yes, always. And then maybe it will get a wide release and the entire world can appreciate its glory.
Word Count: 845
Also sprach Brennan at 8:27 AM