Census Bloodbath: From Birth To Death

I'm turning 19 today! Because I'm me, why not celebrate by reviewing a birthday themed slasher film (And give y'all a sneak peek of Census Bloodbath 1981)? You're so lucky to have me around.

Happy Birthday To Me 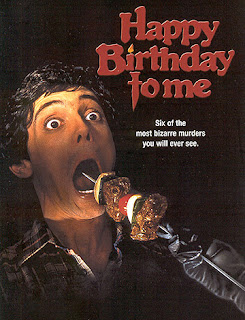 Hailing from the inimitable slasher year of 1981 and the inimitable slasher realm of Canada, Happy Birthday To Me is one of the most highly regarded slasher films of the day (the fact that it has a 33% on Rotten Tomatoes should speak to the consistently low critical perception of the subgenre). Only the idea of how cool it would be to watch it at my birthday party could staunch my unquenchable desire to watch this film the second I got it on DVD. 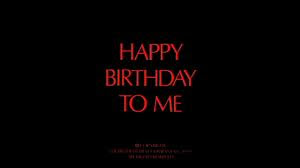 The film opens promisingly with the credits in blood red print on a pitch black screen as moody piano music swells underneath. Thus begins 110 minutes of one of the most quintessentially slashery films the 80's had to offer (never mind that the filmmakers insisted it was a "psychological thriller"), full of branches being pulled back by gloved hands, people saying "Oh, it's you" to the killer, and plenty of bad impressions, which had been a staple of the genre since Friday the 13th.

The fact that I allowed this film to be 110 minutes long without once complaining (all good slasher films are more or less exactly 90 minutes on the dot) is a testament to its quality and its captivating power, which held myself and several other slasher veterans in its thrall the entire time.

HBTM opens as Bernadette O'Hara (Lesleh Donaldson) sets out on her way to meet her friends at the Silent Woman Tavern. She is rudely interrupted in this task by a stranger intent on strangling her to death. In a bizarre moment of chutzpah for an opening scene death, she plays dead and manages to escape the killer's clutches, only to stop just feet away (for... reasons) and be summarily sliced by a shadowy figure in a striped scarf and black gloves.

Her screams fade away into the night and we shift our attention to her friends (all decked out in the exact same scarves as the killer - evidently it's school colors) at the Tavern, the so-called "Top Ten" of Crawford High. As this is a self-named group, we quickly learn that they are snobby, popular, and entitled. We yearn for their deaths more or less immediately.

The group is comprised of Etienne (Michel-René Labelle), a French foreign exchange student who is also an accomplished motorcycle racer; Steve (Matt Craven), a merry prankster; Greg (Richard Rebiere), a cocky jock; and Alfred (Jack Blum), the group's punching bag (but still an accomplished goalie) who is into rodents and taxidermy, just like all regular high school boys. He looks a little like what would happen if a young Woody Allen had a love child with himself.

Courtesy of Mommy, What Will I Look Like? Photo Simulation Services

There's also Ann (Tracy Bregman), a fun-loving and careless girl and her best friend, Ginny Wainwright (Melissa Sue Anderson), who is new to the school. She's just moved back into her old house after recovering from What Happened. See those capital letters! We've just met our Final Girl for the evening!

In case you're a mathematician, you may have noticed I did not just list ten names. There are, oddly enough, ten people in the Crawford Top Ten, but the rest of them are interchangeable and eerily similar looking. I dare you to try to keep them apart.

The kids frolic and prank and generally cavort about until one of their games goes wrong.  Ginny is shoved into a car as her friends drive it Evel Knievel style over an open drawbridge, which triggers repressed memories from The Accident.

As she slowly pieces together what happened to her That Fateful Night, her friends begin to disappear one by one. And here's where the poster tagline kicks in. The film promises "six of the most bizarre murders you will ever see," and wow does it deliver. Although a salivating MPAA was eager to hem back the gore, the kill scenes were one and all clever, surprising, and relevant to the characters.

What other slasher movie can say that? Even Jason Voorhees, He of A Thousand Sharp Things, can't claim to bring that level of quality and creativity to each of his kills. Of course we all can predict that a kid dies by kebab, but could anyone have guessed the death by whirling motorcycle tire or the gleefully brutal weight lifting scene?

Happy Birthday To Me has a lot to bring to the table with a slate of great kills, a solid central mystery that builds in a manner that is actually suspenseful, and a slew of suspects including Mr. Wainwright (Lawrence Dane), Ginny's doctor, David Farraday (Glenn Ford), their creepy taxidermist friend Alfred,  their other friend Rudi (David Eisner) for reasons I can no longer remember, and even Virginia herself as she slowly begins losing her mind. The movie keeps us guessing and even though the final twist is a bit off the wall (a true mark of a great slasher film), the buildup is genuinely diverting and gripping and the pieces fit together astonishingly well once it's all said and done. 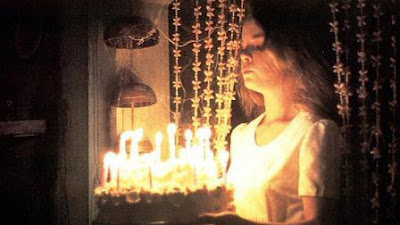 It's a slasher flick, not a freaking arthouse movie.

With moments that are actually chilling and intense, death scenes that can only be described with the word "awesome," and a brief performance by Sharon Acker as Ginny's mom, taking supremely hammy dialogue and eating it alive, Happy Birthday To Me is a classic for the ages.

Killer: Highlight for spoilers [Ann Thomerson (Tracy Bregman)]
Final Girl: Virginia "Ginny" Wainwright (Melissa Sue Anderson). It is no accident that her name has the word "virgin" in it, although the film is mysteriously absent of sex scenes.
Best Kill: Greg is pumping iron when the killer drops a weight on his crotch, causing his barbell to fall and crush his neck. 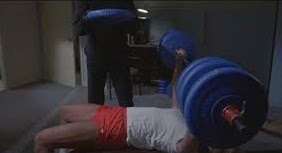 Sign of the Times: The word "nimrod," which has not fallen upon living ears since the fall of the Berlin Wall; The killer wears white Converse; Ginny's room is decorated with those flowing lacy white curtains every girl in the 80's seemed to have. Also a Genesis poster.
Scariest Moment: A car teeters on the top of a drawbridge as it opens.
Weirdest Moment: Ginny invites her doctor to her birthday party and lets him spend the night.
Champion Dialogue: "Come along Winston, give mummy head!"
Body Count: 9; 8 murders and one death in a flashback.
TL;DR: Happy Birthday To Me is a slasher classic with clever deaths and moments of real suspense.
Rating: 8/10
Word Count: 1288
Also sprach Brennan at 8:06 AM