Editor's Note: This post is rated R for necessary swearing in the plot synopsis. Although considering that it's  Kick-Ass 2, so you should really already know what you're in for. 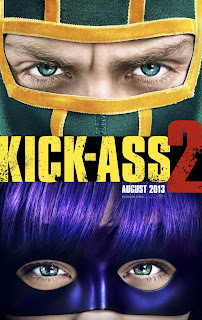 Am I the only one who thinks it's weird that all three of the top-billed cast members have triple names? People have got to calm down. You gotta earn that distinction. When you think you can reasonably compete with Neil Patrick Harris or Sarah Michelle Gellar, give me a call.

First, a caveat. I have little to no recollection of the original Kick-Ass, so forgive me if I sound like an idiot for not understanding a couple minor plot points.

Second, Jim Carrey has renounced his support of this film due to its violent content, and we shall make no judgements on or further mention of this stupidity. 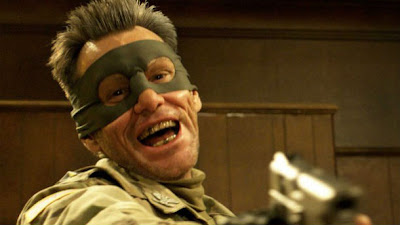 "There's a dog on your balls."
That quote could be from a number of his movies, to tell you the truth.

KA2 presumably follows the events of the first film, which is but a shimmering mirage on the highway of my memory. Kick-Ass/Dave Lizewski (Aaron Taylor Johnson) has retired from superherodom, but when a slew of copycat vigilantes takes to the streets, he decides high school is too boring and begins his training again under the guidance of his old friend Hit Girl/Mindy Macready (Chloë Grace Moretz).

However, Mindy's new guardian has decided that maybe a fifteen-year-old girl shouldn't be out fighting crime, even if she is awesome at it. She is forced to attempt to assimilate into the world of a normal high school freshman and Dave, rudderless, joins a crew of vigilantes known as Justice Forever, led by Colonel Stars and Stripes (Jim Carrey).

Unbeknownst to the teen, his old arch-rival (or ex-friend. I don't remember, I don't care, but he hates him. He killed his dad with a bazooka. That would make anybody mad. Even Gandhi, probably.), Chris D'Amico (Christopher Mintz-Plasse) has donned leather bondage gear and is parading around under the moniker The Motherfucker, gathering a group of heavy hitters to become the world's first real supervillain and destroy Kick-Ass once and for all.

And then violence and punching, mainly.

The film's best scenes are invariably the ones where Hit Girl gets the most to do as she takes on hooded baddies and Regina Georges with aplomb.

During her brief retirement from kicking ass, she is mentored on the art of being popular by a girl who's clearly 20 (The fact that Moretz is 16 in real life only highlights how outrageously old all the other "high school students" in the film are). She auditions for the dance team with some spectacular martial arts-derived moves, falls in love with her first boy band (In the form of a clear One Direction parody that, upon closer inspection, turns out to be a real band. Ouch.), and is left in the dust by what turns out to be a group of very Mean Girls.

Moretz just can't catch a break between this and the whole pig's blood thing at prom, so after getting revenge on the girls in a truly cheap and un-hilarious vomit gag she jumps right on into the best action setpiece in the entire film, taking on a moving van of villains as they try to escape, Kick-Ass in tow. 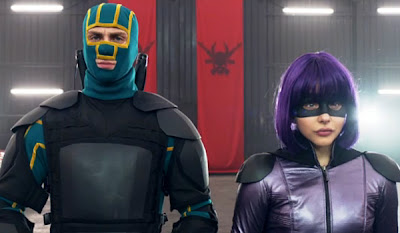 He's a character too, I guess.

If I could only talk about Moretz for the rest of this review, I would, because she is without a doubt the most accomplished person on the set and a lot of fun to watch, leaping deftly between fish-out-of-water comedy and foulmouthed badassery and taking it all in stride.

The other actors do their jobs, for the most part. I would like to take a moment to call out a certain Mr. Mintz-Plasse, though. Perhaps this is just typecasting rearing its ugly head, but the whole "spitting out your words like a rabid chipmunk" thing just isn't doing it for me anymore.

His performance is clumsy and annoying, much like the film's handling of the overarching themes of identity and bloodletting. I can't begrudge a film with a name like Kick-Ass 2 for wielding its theme with a sledgehammer, but when every scene says some variation of "the mask doesn't define you" or "I may wear a mask, but so do you," it gets old. 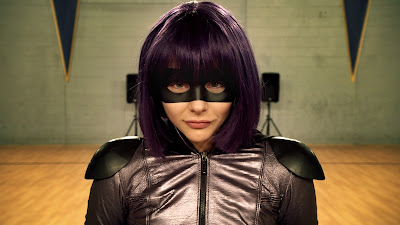 Hey she's wearing a mask! I get it now!

The time has come. We had to get to the violence eventually. While some scenes are pretty great action pieces, like the aformentioned "moving van beatdown," the brutality can get a little intense, especially when it comes to characters we care about. Or at least characters with names.

The film spends its entire first half trying to ground itself in reality, exploring the real-world consequences of a man putting on a mask and fighting crime. The second half involves a guy getting his peeper ripped off with pliers and fed to him (to be fair this is implied and may not have actually happened), a man's teeth knocked about before being decapitated, and a lot of up-close gore (stuff like mouths and eyes that hit the audience harder than just seeing somebody get stabbed or punched).

While the best scenes work according to the ancient tradition of suspending disbelief, some of them are far too intense, especially in the face of all the movie's attempts to convince the audience that the world they display is as real as possible.

We watch action movies and enjoy all the face punching and stabbing and explosions because we understand innately that there are no real world consequences. It's only a movie. But when a film tries as hard as Kick-Ass 2 to tell us that it isn't, the more hardcore scenes are just a little too jarring to be truly enjoyable.

All in all, Kick-Ass 2 is a decent action movie with some great scenes and general good humor (and a gay character who is well-written, immediately accepted, and doesn't die to boot!) but sometimes it backslides into something a little bit more sinister, and that's not what you want out of your summer popcorn fare.

Last Word: If you give your characters racist names and comment on how they're racist, it doesn't change the fact that they are, in fact, racist. Bad doggy.

TL;DR: Kick-Ass 2 is enjoyable but uneven.
Rating: 6/10
Should I Spend Money On This? I'm sure you expected this answer but only if you liked the first film.
Word Count: 1113
Also sprach Brennan at 7:45 AM