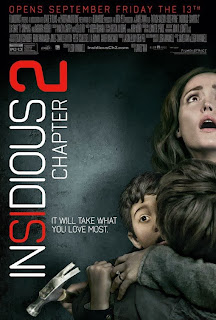 Who'd've thunk that the director of Saw would become the most prominent horror filmmaker of the decade?

Starting off with 2010's Insidious, a tight little haunted house thriller and continuing his horror collaborations with Patrick Wilson in this year's grand scale witchcraft/haunting/demonic possession shocker The Conjuring, Wan has risen to the top of pop horror for better or for worse.

In my opinion, he's overwhelmingly derivative but clever enough to synthesize his sources into something that doesn't feel stale and hackneyed. So really, I don't mind. But, sitting as it is in the shadow of its older brothers, it's hard to go into his third haunted house feature of the decade without some measure of baggage, especially considering the super weird place where Insidious left off.

Remember that? [Warning, this review contains excessive SPOILERS for the original movie if you care about that sort of thing.]The old lady who had haunted Josh (Patrick Wilson) as a child had taken over his body, strangled the medium Elise (Lin Shaye) and snuck up behind his wife. She turns around, gasps, and CUT TO BLACK. 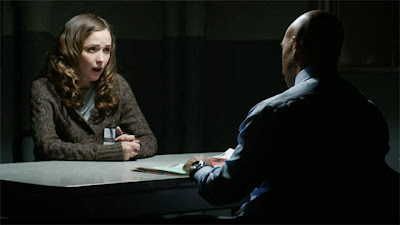 This film starts about three days after that event and right off the bat we get two age-old horror sequel standbys that cement in my fears of how stupid this movie is going to be. First, the whole "Patrick Wilson is evil" thing gets shoved into a corner as his wife Renai (Rose Byrne) immediately trusts him again. This angle will play out in allegedly mysterious ways as we see her begin to doubt his sanity over the course of the proceeding weeks. Since we already know he's evil, this is just hella boring.

The second (and most egregious) offense is the sheer amount of scenes in the first 20 minutes in which characters say "Let me explain the entire plot of the first film to you, even though we both already know what happened." It's just plain clumsy screenwriting and the extensive flashbacks to Josh's childhood compound this with screechingly bad acting and very unnecessary depictions of events we have been told about twice already (once in the last film and once in the beginning of this one).

If you recall my review of Insidious, you'll remember that that film was an effective and scary film for the first two thirds but peters out, opting for a bizarre and out of place ending that goes on far too long. Chapter 2 is the opposite of that, so the good news is it gets better as we go along. The bad news is that for the first half of the film, what we get is Rose Byrne is Scared of Things 2.

This half of the film acts as a dictionary of horror tropes, cycling through a laundry list of clichés. It touches upon many of the old Insidious standbys and throws in Pausing a Videotape to Look at Ghosts, There's a Scary Lady in the Mirror, Mysterious Piano, and more! Wan is up to his old tricks, cribbing heavily from The Shining, The Blair Witch Project, The Changeling, Black Swan, The Silence of the Lambs as well as such seminal horror classics as Final Destination and Return to Horror High. 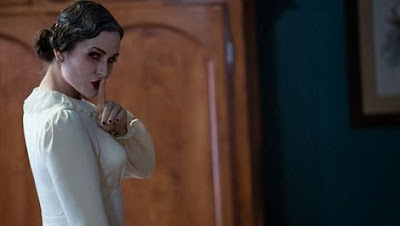 And just a dash of American Horror Story.

This entire section of the film is ineffably, laughably bad. The filmmakers falter at basic things like match cutting or making sure there's no dust on the camera lens. At one point Patrick Wilson teleports about ten feet in a one second cut. Almost as bad are the outlandishly stupid characters.

It takes investigators about fifteen minutes to realize that the dead bodies in a serial killer's house are victims, nobody seems to notice Josh is transparently murdery, and apparently Elise recorded her hypnotism of Josh as a child but then never rewatched the tape.

My personal favorite bit of dialogue is perhaps a bit hard to understand transcribed, but I'm gonna do it anyway because it's so indicative of the level of contempt Insidious 2 holds for its audience.

Paranormal Investigator: "Our Lady of Angles?"

No, you know because you have a basic grasp of the English language.

So. Not to beat a dead horse, but it's dire and embarrassing and the crowd was laughing uproariously the whole time.

And this lady who is in like five minutes of the film is in every single freaking promotional still.

But then! All of a sudden, you can feel a different film struggling to break through the mire. The first tremendously effective scare happens about three fifths through the film, and boy is it a doozy. I shouted in my seat and recoiled. Unfortunately, it is immediately followed by probably the worst scare in the entire film, but from that point on the terribly scary movie Chapter 2 so desperately wants to be begins to assert itself.

The second part isn't perfect with its inscrutable baby motif and mild transphobia but it really starts to pick up steam, chugging along with some terrific scares and a tie-in with the original film that could have been a cheap gimmick but works so brilliantly that it must have been planned out the minute they wrote the original script. And if not, it's an absolutely seamless bit of universe building.

It's involving, it's pretty terrifying, and it totally works. Even the obligatory sequel tag ending works in a way that completely gels with the narrative universe, more along the lines of The Conjuring than Insidious, which is really a great place to be, that film being Wan's magnum opus.

Again, Wan milks a PG-13 rating for every drop of atmosphere and dread. The lighting scheme inside of the house is beautiful and weird in a nod to Dario Argento that doesn't hold the tang of Wan's typical pilfering, the effects are realistic and brutal, and the final act zips along even managing to wring scares out of The Further, the location that absolutely killed its predecessor.

Although the flaws outnumber the successes, I am excited to see where this series ends up going. I never thought a sequel could work for the original film, but Chapter 2 showed spurts of excellence that prove there's more story to tell here. 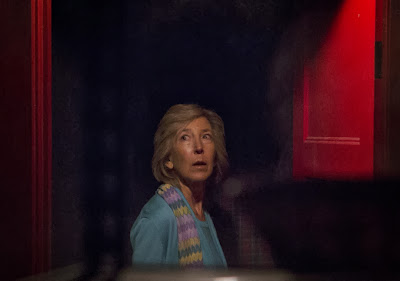 Also she played the teacher in A Nightmare on Elm Street. So there's that.

TL;DR: Insidious: Chapter 2 is weighed down by a bloated and boring front half but still delivers solid PG-13 thrills.
Rating: 4/10
Should I Spend Money On This? Definitely one to marathon before the inevitable Chapter 3 comes out, but there are much more exciting horror films coming down the pike in October so don't fret if you miss it in theaters.
Word Count: 1178
Reviews In This Series
Insidious (Wan, 2010)
Insidious: Chapter 2 (Wan, 2013)
Insidious: Chapter 3 (Whannell, 2015)
Insidious: The Last Key (Robitel, 2018)
Also sprach Brennan at 11:14 AM