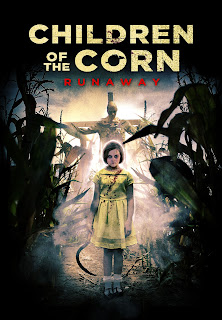 Well, it happened. We're finally here. The end of the line. Last stop. The tenth and final film in the Children of the Corn franchise. Until seven years from now when Dimension needs to renew the rights and demands somebody cobble one together in three days. Curiously, this is the only time one of these marathons has had its final entry created in the year of writing, proving that the Corn really can't be kept down. It will keep springing up through the cracks like an insidious weed. 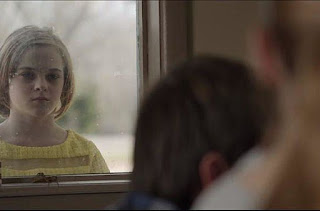 That was a bad choice of words. I've gone and reminded myself that I could be watching the Insidious movies instead. And there's only FOUR of those!

Children of the Corn: Runaway, intriguingly enough, follows the story of an actual canonical character from the short story. Ruth (Marci Miller) was a pregnant teen member of the cult of He Who Walks Behind the Rows and escaped by burning down the cornfield and most of her compatriots with it. She has spent the last thirteen years wandering the American South with her son Aaron (Jake Ryan Scott) like a regular Sarah Connor, avoiding an implacable presence she feels is following her (aw damn, I just reminded myself that I could have been watching It Follows instead, too).

When their truck is impounded by police in a remote Oklahoma town, Ruth decides that maybe it's time to try and put down roots. She gets a job as a mechanic, befriends local waitress Sarah (Mary Kathryn Bryant), and attempts to give her son a normal life while experiencing bizarre hallucinations of her murderous past. But when several adults in town turn up dead, she realizes that the evil she is facing might not be only in her head.

But it's the tenth Children of the Corn movie, so what were the odds that she was just imagining things?

John Gulager (who previously did the Feast movies and Piranha 3DD) is probably the most famous director to helm a Children of the Corn movie, which is saying something more about the franchise than anything. But it's still surprising that this movie got so little fanfare, even for a direct-to-video release. The only reason I even knew it existed was because I was bored and scrolled all the way down to the dark corners of my Redbox app one night.

And yet, exist it does. And not much more than that. Even though the concept itself is probably the best in the franchise, it immediately whittles away every last vestige of potential it has by the half hour mark. No, instead of being an interesting exploration on trauma and living with guilt smack dab in the middle of a zeitgeist that just so happens to be conveniently obsessed with cults, it's a shallow slog chock-full of characters it refuses to sketch out in anything but strokes so broad they're visible from space.

Including "Hooker," the most interesting character in the movie by a country mile.

Children of the Corn: Runaway is like looking at a good movie through a car's review mirror. There are tiny slivers of quality and structure that you can make out, but you feel like you're constantly moving away from them at high speed. The cinematography is actually decent, giving the town a sun-bleached feel that drains the energy right out of you (on purpose, I might add), but it also sucks every last bit of tension from potential scare scenes. And the acting is pretty good too, but the dialogue is so inane that every second the performers are forced to speak (and there are a lot of those seconds, because this "talkie" trend seems to be here to stay) you'll cringe so hard you'll end up a half an inch shorter by the time credits roll.

There are also some murders that are creatively staged (albeit with a heaping helping of weightless CGI blood), but they're either drawn-out far past the point of comfort or revealed to be one of Ruth's endless, irritating dream sequences. 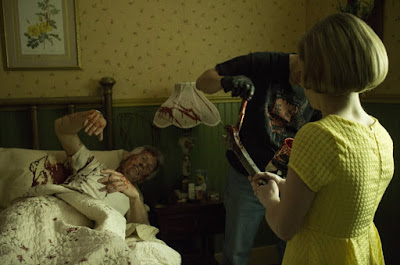 In scenes so elliptically associated with the plot, you do begin to wonder if you just dreamed them yourself.

Honestly, I think the biggest problem here is the baggage they brought with them from the franchise's first returning screenwriter Joel Soisson. He wrote (and directed) 2011's Children of the Corn: Genesis and does not seemed to have learned a lot of lessons in the meantime about sticking the landing on an interesting premise. Or even sticking the takeoff to begin with. It perhaps makes more sense than Genesis, but it's much more rote and boring in the process, anchoring itself to characters that don't have the weight to keep the movie on course. It just wanders off in any old direction until a rapid-fire succession of reveals at the end that are just more and more confounding.

On top of everything else, Runaway commits that worst of horror movie sins: it's boring. Almost nothing happens in this movie, and while it skates in at just over 80 minutes, it feels easily thirty or forty longer than that. It just thoroughly fails to find a personality, placing too much stake in a wholly charisma-free child villain, using voiceover at intervals too random to feel consistent, and throwing in a boost of stylish craziness at the exact moment you most want to actually just sit down and follow a straightforward plot.

It's just too complacent in its laziness for a film that sets up so much stuff that could actually be compelling. It's all the more frustrating for giving you the ability to snatch brief glimpses of the - if not awesome - at least decently middling movie it could have been. All I can say is, at least we're not ending with the worst Children of the Corn movie, but it's not that steep an uphill hike to get to Runaway from the likes of Revelation or Isaac's Return.