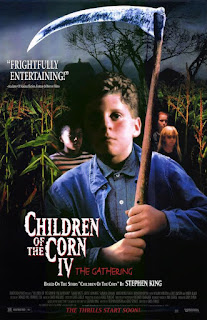 I've already admitted to the mostly guilty pleasure of enjoying the first three Children of the Corn movies on some level or other, but I saw no way that trend could possibly continue. Urban Harvest was the franchise's first dip into direct-to-video sequeldom, and the quality threshold is very shallow once you hit that point. Well, astonishingly we don't seem to have reached that yet. I would please like everyone to remember that we grade these things on a curve before they peep at the numerical score down below, but Children of the Corn IV: The Gathering is maybe my favorite entry in the franchise so far? 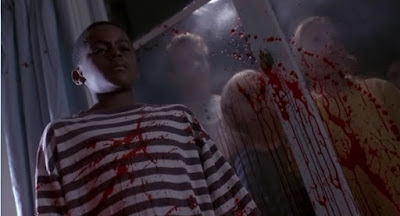 I don't even know anymore.

Grand Island, Nebraska. Ever heard of it? I don't imagine you would have, because it's never been mentioned in the franchise before. In fact, nothing that's been mentioned in the franchise before will be present here, so hold onto your butts. Except corn. There's some corn, I guess, but not as much as seems necessary. Anyway, it turns out that The Gathering is only a Children of the Corn movie by name and not really by any tether to a single scrap of the mythology of the first three films. As someone who has been pretty inoculated against horror sequels lying about what they are (we've gotten a Halloween without Michael Myers, a Silent Night, Deadly Night sequel that forgets about being a slasher and barely mentions Christmas, two Exorcist prequels that are literally the exact same movie... I could go on), this didn't bother me a tremendous amount, but buyer beware.

What The Gathering is actually about is a young med student named Grace Rhodes (Naomi Watts, still paying her dues at the beginning of her career) returning to her hometown in order to care for her agoraphobic mother June (Karen Black, who was in the opposite end of her career, the only other valid reason to appear in a Children of the Corn sequel) and her two much younger siblings Margaret (Jamie Renée Smith) and James (Mark Salling, no comment).

She returns to her old job helping out the town's kindly physician Doc Larson (William Windom) in the place of her best friend Mary Ann (Samaria Graham), who has now become the local school nurse. Unfortunately, this coincides with the resurrection of charismatic youth preacher Josiah (Brandon Kleyla), whose soul has been released from its eternal resting place - a well (Naomi Watts must have nightmares about wells between this and The Ring). Josiah channels evil spirits to spread a strange disease around all the children in town, slowly possessing their souls with the spirits of dead children from the town's past and kill the parents and something something, Satan is probably involved at some point. He Who Walks Behind the Rows is conspicuously absent. 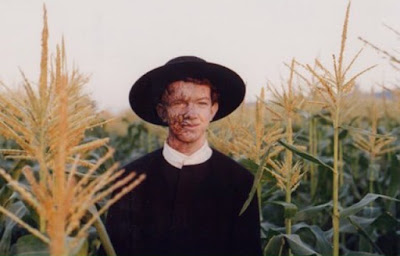 He must have asked for a pay raise or something.

This may not be a Children of the Corn movie, but what it is is an outbreak thriller crossbred with a town-with-a-secret thriller, and both of those are things I like very much. As a card-carrying hypochondriac, a story about a doctor dealing with a mysterious flare-up of a widespread, powerful disease is something that gets under my skin, even if I already know that the source of said disease is some dumb kid in a hat he stole off a Brooklyn gentrifier.

In fact, the scariest scene in the entire franchise so far (and there are at least one or two strong contenders for that title, truth be told) has to be the scene that cross-cuts across a dozen homes as all the children across town simultaneously have their fevers rise perilously high, calling out to their parents in woozy anguish. The tension ratchets up even higher than their temperatures as Naomi Watts and various adults around town rush to fill baths with ice and protect the young from something deadly and inexplicable. This sequence also ends with a bit of wirework straight out of The Exorcist (shout-out to that previous October marathon!) that could have been silly but struck my already weakened nerves in just the right way.

There's actually quite a bit of Exorcist-y paranormal mayhem going on around the outskirts of this movie, and the slow development of the mystery surrounding Josiah and who exactly is inhabiting the bodies of these kids is doled out carefully, even if it doesn't reach an entirely satisfying conclusion (the movie reverts to dumb supernatural horror in the third act, when Naomi Watts exploits the ghost's obvious weakness like it's a video game boss). The only place where the horror doesn't quite land is in Josiah himself, who is just as milquetoast as every faux-Isaac the franchise has attempted to position as antagonist.

The other kids get their moments to be creepy one and all, though. Margaret turns from sweet to chilling on a dime, the twins who are the most heavily featured of the townsfolk are clearly twisted, and the gaggle of too-pale tots that watch various deaths cut a creepy silhouette. And shockingly, those deaths are just as plumb fun as every sequel has been so far. We're already starting to see a bit of wear and tear with some perfunctory tempera paint blood at points, but the two scythe impalations are impressive (one in the chest and one in the f**king face in the best effects setpiece of the movie). 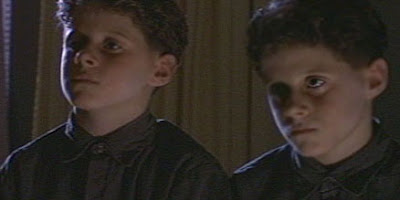 I couldn't find any screengrabs of the kills, so here are them creepy twins I mentioned.

And for once in this franchise, the non-horror elements are actually almost kind of interesting. Again, the third act kind of obliterates any nuance (as happens all too often in these types of movies), but there's a bit of a family drama playing out between Grace and her mother that's actually - dare I say it - compelling to watch. It's almost entirely interesting because the people playing these roles are Naomi Watts and Karen Black, certainly two of the best actors to ever stoop to the level of a Corn movie, but I'll take what I can get.

The small town vibe of this film is actually quite nice as well, capturing the essence of the quiet rural life in a charming, warm-hearted way before it all goes to seed (if you'll allow a truly execrable corn pun). Of course, nevertheless the silly 90's DTV horror elements will run rampant, as they are wont to do: there is a truly mystifying amount of slow motion at play here, and a death involving a gurney is laugh-out-loud ridiculous. But all in all, The Gathering is a truly great thing for what it is, going above and beyond the call of duty in a way that I never would have dreamed of after a thousand peyote trips.