Kid In The City 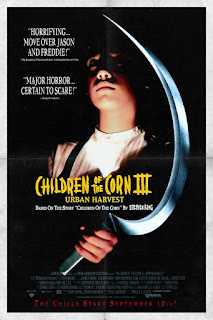 It's a sign that horror franchises have gone downhill when they transplant their villains to the city (as in Leprechaun in the Hood or Jason Takes Manhattan). It's also a sign of certain doom when they renege on a promise of a Final Chapter, which Elm Street, Friday the 13th, and Saw have all done). So, it's without further ado that I present to you Children of the Corn III: Urban Harvest, which followed The Final Sacrifice by a short three years. 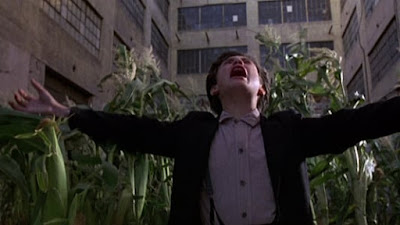 You can never keep a good horror franchise down.

In Urban Harvest, Nebraska values are taking a trip to Chicago when brothers Eli (Daniel Cerny) and Joshua Porter (Ron Melendez) are adopted by an eager young city couple after the mysterious disappearance of their father out of a trailer park just outside Gatlin. However, it's not so mysterious to the audience, who has just seen Eli channel He Who Walks Behind the Rows to sew the man's eyes and mouth shut with corn (don't ask) and turn him into a human scarecrow.

Anyway, the dad William (Jim Metzler) is obviously a businessman in charge of international corn distribution, because what else would he be? When Eli plants a mysterious, disease-resistant, demon-plagued strain of corn in a nearby abandoned factory (don't ask), Malcom sees dollar signs. His wife Amanda (Nancy Lee Grahn) on the other hand, is living out a Rosemary Woodhouse nightmare where she realizes that something is thoroughly wrong with this kid they adopted, but William refuses to believe her as long as he can make money from it. Meanwhile, Eli seeks to convert the other children at school into his corn cult and wreak some good ole country mayhem on these city folk. 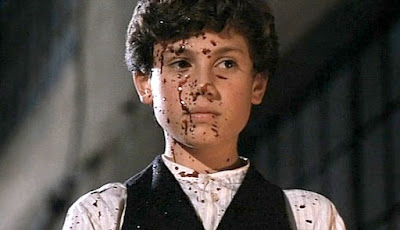 And he's not NOT successful.

It's not often that exactly one person can be held responsible for a dumb horror movie being any good at all, but when there is just one person, they are almost always a special effects artist. Such is the case with Screaming Mad George, the makeup guru who was brought onto this particular sequel. The man had already redeemed a deeply direct-to-video slasher title with Silent Night, Deadly Night IV: Initiation, in addition to his work on classics like A Nightmare on Elm Street 3 and Predator, but he didn't hesitate to pull out all the stops, even for a dumb Children of the Corn movie.

Urban Harvest is truly disgusting at times, the franchise's supernatural slasher kills reaching new heights with scenes like a woman's face melting clean off or a head splitting open to reveal that it's full of bugs. But even the basic deaths are stunning, including a My Bloody Valentine inflected sequence where a head is impaled on a water pipe (an impact that you feel deep in your bones and won't forget anytime soon).

But all those sequences pale in comparison to three showstopping - and heart-stopping - setpieces that push the envelope of how f**king weird and twisted a 90's horror sequel could possibly be. I will mildly spoil this movie by saying that Eli's followers get massacred at the end of this movie in an orgy of phantasmagoric violence that rivals Evilspeak or Carrie in its unexpected explosion lurid glory (and not to digress, but isn't it so on brand that I've reviewed Evilspeak but not Carrie?). One sequence is so shocking that I hesitate to even spoil its nature, except to say that it involves the severed head of a Body Count Filler hobo that ceases to become filler.

But what I must spoil a teensy bit by showing you a single still image is what becomes of Malcom (Jon Clair), Joshua's new school chum. He essentially becomes chum on a trip to Gatlin to discover Eli's weakness, when the corn comes alive and rips out his spine, turning him into a horrifying funhouse human monster straight out of The Thing in the process. It's completely stunning, disgusting, unforgettable work that just shouldn't be in a movie of this vintage. And yet it is, and we're all incredibly lucky that somebody let it happen. 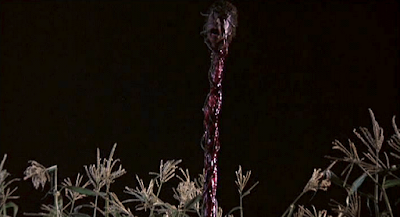 Maybe "lucky" is a strong word, but I love me some bonkers special effects.

Unfortunately, outside of the effects (which are prevalent enough to make the movie a must-watch even if the rest of the time it was just a blank screen), Urban Harvest is a pretty bland movie. This is where everything you might reasonably expect from a mid-90's slasher sequel starts to kick in. I wouldn't call the acting "bad," because that would imply that it made any impression at all, but let's just say that Eli is no Isaac in terms of charisma and creepiness, and everybody else might as well be chopped liver. Which, in most cases, the movie quite literally treats them like. 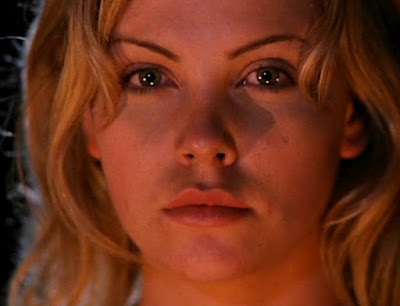 Except my girl Charlize Theron, who shows up as an extra. I'm always happen to unearth a skeleton in a celebrity closet, and this is a great one.

The plot is perfunctory, neither focusing on the conversion of the children or the parents who are threatened by the growing cult. Thus, tension is nearly impossible because we don't really see what's happening on either side. In fact, two of the parents involved we only meet minutes before they are killed. And the potential drama of Joshua realizing his brother is evil is shrugged off; he just treats Eli like a kid he met yesterday and not someone he's spent his entire life with.

There's a weird racist undertone to William Porter that could have been interesting, but it goes nowhere. And that Rosemary's Baby tale of nobody taking Amanda Porter seriously goes nowhere as well. In the non-gore sequences, we just get a heaping burlap sack of 90's horror tropes including truly ridiculous unmotivated zooms, flashback footage from the previous films crudely disguised as nightmares, and an altogether too liberal use of an affected deep demon voice that undermines any sort of slow burn the film might have had.

It's milquetoast at best, with only two moments rising above the thin gruel of a plot. First, there's a sequence about Eli's origin story that rivals the Sinister franchise for true creepiness involving child murderers. And there's one fun match cut between Eli blowing out a candle and the lights going out above his next victim. But beyond that, there's not a lot to recommend Urban Harvest, which doesn't even use its city setting to its advantage, opting to mostly take place in a factory/suburban home set that could have been anywhere.

Oh, but Screaming Mad George. His work is so delectable and shocking that even if the film was actively terrible instead of just bland, it would be a hidden gem. I'm incredibly surprised that, this deep into the franchise, these movies have anything to offer, especially something of this superior caliber. So far, the trilogy of these films I have seen all bring something unique and worthwhile to the table, even if none of them are exactly scraping greatness. Not bad for one of my marathons!