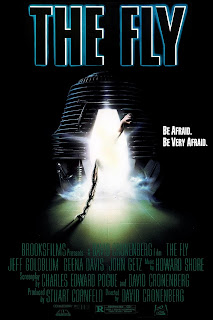 Well, four films deep into a marathon we weren't even supposed to do, we've arrived at the reason I started this whole mess in the first place: David Cronenberg's classic remake The Fly, which until now was one of my biggest horror blind spots (now the movie at the number one spot is probably The Haunting, in case anyone is keeping track). Not only is it my first real excursion into the Cronenberg oeuvre (I saw The Dead Zone as a kid and I've seen the mediocre non-horror M. Butterfly, but that's it), it's the movie that I decided would be the final brick in my opinion of Jeff Goldblum.

I've never been taken with the actor's endless array of tics and "ums" and "uhs," but I'll be the first to admit I came at his career from the wrong direction. You're probably not supposed to familiarize yourself with his work starting at The Switch, Morning Glory, and his cameo on Friends. Thor: Ragnarok was a step in the right direction, less so Jurassic Park (which is a masterpiece, but no thanks to him). Anyway, there was a lot riding on this movie, and I'm happy to say it withstood my probably too-intense demands upon it. 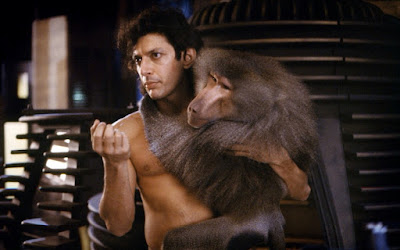 At least now I know he was weirdly ripped once and had a baboon friend.

So I still don't like Jeff Goldblum, but I can finally at least accept that he is well cast when he is asked to play wildly intelligent men who are also pompous asses. Said pompous ass is Seth Brundle, a man who is in the final stages of developing a teleportation machine, spurred on by his own intense motion sickness. Enter Veronica Quaife (Geena Davis), a reporter who falls in love with him, but also wants to document the final stages of his experiments in a bestselling book that honestly sounds like it would have been pretty boring if all went according to plan.

Alas, all does not go according to plan. When Veronica leaves in the middle of the night to clear things up with her troublemaking ex/editor/Game of Thrones name-haver Stathis Borans (John Getz), Seth tests his teleporter on himself in a fit of drunken egomania. Unbeknownst to him because he isn't caught up on his 50's sci-fi classics, a common housefly joins him in the teleportation booth and they are bonded together on the molecular level. At first, this manifests itself as a surge of superhuman energy that causes a rift between Seth and Veronica, but then Brundle's body slowly degenerates into a half-human, half-fly monstrosity. 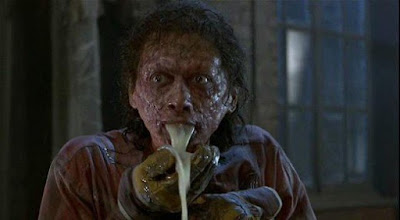 It's, shall we say, hella gross.

The Fly really only takes the skeleton of the original's plot, and applies a great deal of gooey flesh to it, but the overall feeling remains substantially the same, in a really interesting way. The context of both stories is so very different, but they're both at their core about the trials of a loving couple who are suddenly and inexplicably faced with the fact that one partner is doomed to die much sooner than anticipated, thanks to their own hubris. Cronenberg's film definitely foregrounds the metaphor of a fatal illness, because of course it does, but it shares the emotional core of a woman staring directly into the face of her love interest's mortality. And that face is pretty ugly, if you hadn't noticed.

And while I have my qualms about Goldblum's general Goldbluminess (it was certainly fresher back in 1986 at least, before he had the chance to Christopher Walken himself and eventually become a caricature of his own mannerisms), Geena Davis knocks it out of the park here. Especially in the third act when she is doled out her own little slice of body horror, the existential dread that crashes upon her is truly harrowing and spellbinding. 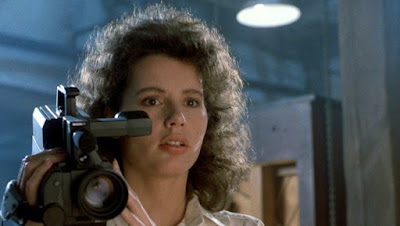 Maybe she fueled her performance by drawing from the pure horror that is both of their haircuts in this movie.

Honestly, The Fly is probably one of the most essential remakes ever made, respecting the intent and form of the original while applying a new director's very strong personality to the material, improving it without denying its inherent special qualities. And boy does Cronenberg have a personality. I have it on good authority that this is his warmest, most emotional movie, but he sure does find a way to work in a lot of talk about transcending the flesh and whatnot.

And transcend the flesh he does. The final act of this movie is replete with some of the most disgusting ooey gooey special effects you ever did see. I'm a bit of a horehound myself, but the things that really get my skin crawling are intimate bits of gore like, oh, the fact that there are scenes involving the removal of both teeth AND fingernails because why the f**k not? It's certainly not for everyone, to the point that it's hardly for anyone, but the fly transformation is certainly a makeup masterwork, showcasing just how far movie magic had come in the almost three decades since the original movie hit theaters.

It's only aided by the incredible production design, which updates the pedestrian glass cases of the "matter transmitter" into a vaguely alien pod that spews billowing white smoke like the mouth of a cauldron. 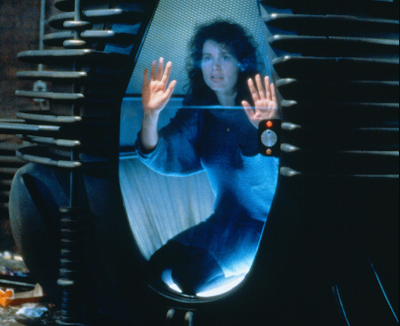 The thing they don't tell you is just how much of a slow burn it is to get to any of that. There is a lot of movie before we go full-tilt body horror, and while the structure isn't as wonky and riddled with filler as its source material, there are a couple of moments where it flags before it reaches that home stretch. Maybe I'm just being a petulant gay who's sick of watching straight people fall in love, but something about their romantic chemistry wasn't exactly pulling me in at first, and I had a tough time reconciling how quickly they seemed to form a bond we were supposed to view as unbreakable. Well, not unbreakable, but strong enough to be rough to watch when it's tested.

Look, they get there in the end, but it was just a bit of a struggle for me personally. Anyhow, who could possibly care about some niggling first act qualms when the movie delivers such a marrow-churning display of geek show grotesquerie with a dash of existential subtext for flavor? The Fly is certainly the best of the franchise without a doubt (although I've liked all of them so far to one degree or another), but you didn't really need me to tell you that, did you?