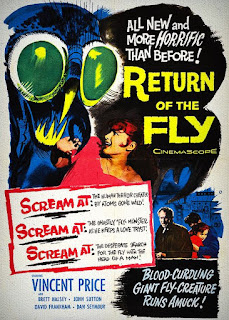 This just in, I'm an idiot, and I love what I do way too much. This October I'm already running a Children of the Corn marathon in addition to our annual crossover with Cardboard Science at Kinemalogue. But I did a bad thing. After Hunter assigned me to watch 1958's The Fly, I looked at my shelf and realized I owned the Cronenberg remake, even though I'd never seen it. Then I researched the franchise and learned that the original had two sequels and the remake had one. What's this? A franchise I'd never seen before and barely even knew about? You know I had to get on that crap.

I was already feeling kind of bad that this Corn marathon coincides with the series we're currently running on my podcast Scream 101, so it's kind of redundant if someone both listens to the podcast and reads my blog (even though that's assuming a lot on your part to begin with). Because of that, I thought I'd do something extra special. So hey! Whatever the twisted genesis, this October I'm running a bonus series on the five entries in The Fly franchise. Maybe I'll get a P.O. box so you can send me those straitjackets with more convenience. 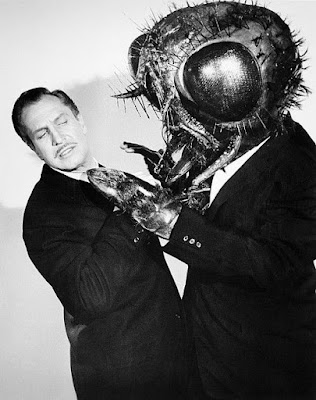 Pictured: Me grappling with my inner completist demons.

Return of the Fly arrived just one year after The Fly sucked a solid chunk of money up through its B-movie proboscis. The studio did what any self-respecting company would do in this situation: rush through a follow-up and slash the budget, reverting this entry to the much cheaper black-and-white, which also helped cover up any seams in the special effects.

So, the plot. The hero of the last film obviously being dead, we pick up with his son, who was eight years old in 1958 but seems to be in his mid-to-late 20's at this point, which would seem to set this film in the late 70's if the filmmakers paid a single shred of attention to detail. But judging by the fact that no fewer than two times we see a door destroyed, only for it to be fully functional and whole in the very next scene, they maybe didn't care too much about such pesky little nuisances as details.

Anyway! The son in question is Philippe Delambre (Brett Halsey, and I certainly don't mind the time jump because he is the cutest), who against the wishes of his uncle François (Vincent Price, the only returning performer) continues his father's research to develop a teleportation device. He does this with the help of his assistant Alan Hinds (David Frankham), who might not be as nice as he seems. Oh, and one of these people is gonna turn into a half-fly half-human monster, but did I need to tell you that?

At cross purposes, the two scientists and the reluctant François pick up their work in a secluded mansion left to Philippe by his grandfather. Also left to him is the housekeeper and her lovely daughter Cecile Bonnard (Danielle De Metz), who becomes an extremely half-assed love interest for Philippe. 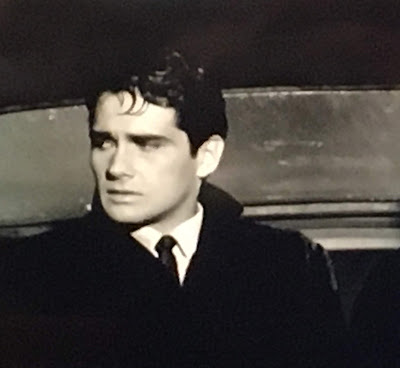 But who could blame her?

Return of the Fly certainly indulges in the sequel sin of "the same, only worse" in a lot of aspects (more on that later), but the thing that surprised me is that it's almost as delightful an entry in the 50's science fiction canon. The scenes where the movie shines err on the side of melodrama more than horror, but the first two acts are perhaps even superior. The original has a killer opening but once the filmlong flashback begins, there are many stalls and starts before anything meaningful happens. Here, we don't see any fly action before the 50-minute mark, but the movie is already operating on all cylinders.

[EN: Be prepared for some medium spoilers, folks, throughout the remainder of the review.]

It is pretty quickly revealed that Alan Hinds is a criminal on the lam who wants to make his fortune by stealing the plans for the teleporter, and his duplicity adds a layer of tension to the repetitive science experiment scenes that wasn't there last time. All three of the characters working on this project have their own purposes and motivations that chafe against the others, and the sheer amount of peering through window curtains and tailing each other in cars is pure confection to any fan of intrigue.

Because Lord knows we won't be sated by eleven more scenes of flashing Science Lights.

There are even two scenes in the pre-fly portion of the film that are extremely effective and harrowing. The first involves a splicing accident that gives a guinea pig human hands in the film's most existentially terrifying special effect. The second is the immediate preamble to the fly-ification (which is actually brought on by duplicity rather than scientific hubris, for a nice change). You see the character in question realize exactly what's about to happen to him, and the dawning horror on his face is almost too much to bear.

Of course, as soon as the fly thing happens, the movie falls the f**k apart. For one thing, it doubles down on a lame element that was only implied in the original film. This film basically posits that the only reason flies aren't bloodthirsty serial killers is that they're too tiny. As soon as it gains human form, it goes on an ill-motivated rampage through town that combines boring shots of him wandering through forests with bizarre slasher-esque kills that don't even involve his giant fly mandibles, which are pretty freaking cool (the fly head here is a much better mask, and while the film indulges in showing it perhaps too much, it nevertheless deserves closer inspection).

Unfortunately, the human-head fly-body situation is a microscopic fraction as chilling as the last time,  and is shown far too early in the third act to be particularly useful toward chilling the spine. And speaking of things from last time that are even worse, we all know Vincent Price was wasted in The Fly, but Return of the Fly treats him like a featured extra, having him deliver a good fifty percent of his performance from bed. The ending is also entirely perfunctory, an unsatisfying button to a film that immediately began deflating the second the horror actually started happening in earnest.

Return of the Fly fails to accomplish its largest goals, but it's still a satisfying romp through the annals of sci-fi history and I'm glad I made the trek. Plus, if nothing else, it gave me a guinea pig moment I'll never forget.