Cardboard Science: Get Outta Your Mind 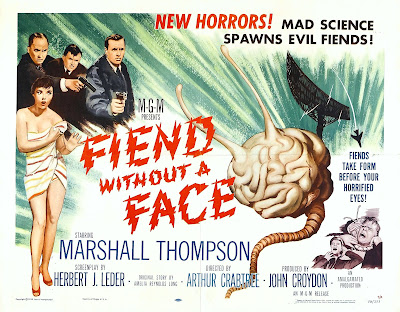 Halloween is swiftly approaching, and thus ends this year's annual crossover with Cardboard Science at Kinemalogue. The third and final 50's sci-fi movie assigned by Hunter Allen is the one that on paper aligns most with my tastes, the more explicitly horror-fueled Fiend without a Face. For reasons entirely unknown to me, this is one of the only two Cardboard Science features to be included in the Criterion Collection. It's Godzilla and this, as if Invasion of the Body Snatchers wasn't just sitting right there. 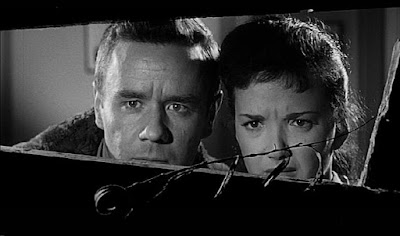 See, even they're confused!

Fiend without a Face is the second entry this month to be explicitly set in Canada instead of the sandy bits right outside Santa Clarita, where every other one of these movies takes place. An American air base has been constructed just outside a Manitoba backwater, and the atomic power plant they use during their radar experiments (they're trying to see Russia from their house) is disturbing the nearby residents greatly. When people begin dying at the hands of invisible creatures literally sucking their brains out through their spines, American Major Cummings (Marshall Thompson) finds himself in the middle of an investigation with Barbara Griselle (Kim Parker) the uncooperative sister of the first victim, just as tensions reach their peak between the locals and the military. 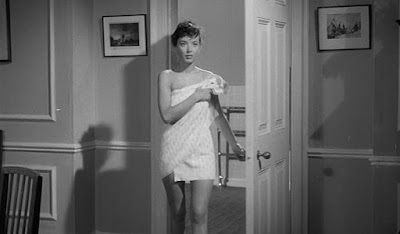 Other tensions are also rising, but less bothersome ones as far as Maj. Cummings is concerned.

OK, here's where I'm going to spoil the crap out of this movie, because the mystery of what's happening isn't very well explored anyway, and the only thing really worth talking about here is the final fifteen minutes. So if you're that concerned, check out the movie and come back. I wouldn't be too concerned though. Word to the wise.

The titular fiends, as explained to us when we're literally sat down and treated to a monologue explaining everything at about the 50 minute mark, are the thoughts of local retiree Prof. R.E. Walgate (Kynaston Reeves) who has been experimenting with telekinesis. The thoughts have been given material form and when they gain enough radiation strength from the nuclear power plant, they become visible and reveal themselves to be creepy crawling brains with spinal cords attached. 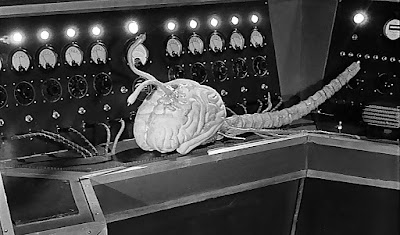 It's like a diagram from a biology book based on From Beyond.

So, these brains. They're presented via some shaky stop motion animation, but they're a heck of a lot of fun, and the way they bleed and dissolve when they're shot is some unprecedentedly gory material for the time. The instant they arrive onscreen, Fiend lights up and becomes a gleeful, uproarious jaunt through siege movie mayhem. It's gruesome and campy in equal measures, exactly what one might be looking for from one of these flicks.

Unfortunately, getting there is a slog to say the absolute least. They've saved their entire effects budget for the truncated third act, so we're treated to a heavy artillery of dialogue sequences, and not a one of these characters is worth spending a scrap of your time with. Major Cummings and Barbara fall in love only because they're the leads of a film, and not because there's any sort of chemistry between them (in fact, she seems to hate him until she just sort of doesn't), and the much more interesting material of the town turning against the military is kept to the background and vanishes completely after the film's most effective scare gag (a victim of the fiends has been converted into  dribbling madman).

And I've already mentioned how frustrating and perfunctory the mystery is here. Cummings & Co. mill about not really gathering intel, and the the professor decides to fess up basically on a whim. There's no building to anything, it's just a wet dribble of plot until the brains show up and provide an electric shock to the film's system. And any action that takes place before the explosive final moments is just bizarre, like a fistfight in Barbara's home that could have been better performed by a pair of Rock'em Sock'em Robots. 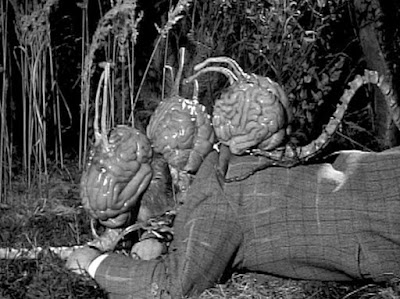 Or perhaps even A BUNCH OF COOL BRAINS. Don't hold out on me, movie!

The only thing that's remotely effective in the first fifty minutes of Fiend is the sound design, which is actually quite masterful. I don't often talk about cinematography or sound or what have you in these features, because they're mostly crafted by workmen who just want to make sure you can see it. But there's a subtlety to the sound hear that deserves a second look. Or listen, I suppose.

For one thing, when the fiends are still invisible, the sound effects of their passage across the ground is a truly disgusting squishy noise that will make your spine curl. But the audio doesn't just shine in the horror sequences. The rift between the community and the army base is underscored constantly by the sound of planes flying overhead, overshadowing any conversation with their constant droning presence. It's intrusive and really contributes to the sense of place, highlighting how fundamentally the presence of the base invades every aspect of life in town.

The most harrowing scene in the entire movie doesn't even involve the fiends at all. It's Barbara at the funeral, attempting to lay her brother to rest as the priest's words are drowned out by an enormous jet overhead. That simmering resentment is so well curated through every frame of this movie that it's an even more gargantuan shame that the script doesn't do butt-all with it.

At the end of the day, I don't feel that the good in the movie outweighs the stilted tedium of the rest of it. What's good is very very, emphatically good. But it doesn't make up for being even less than run-of-the-mill for the better part of its run time.