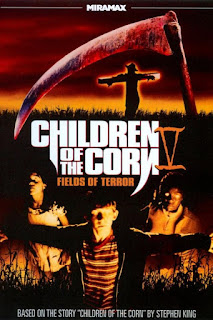 I always knew we'd hit the quality valley at some point in our Children of the Corn marathon. For a franchise with only one and a half entries that got released theatrically, something had to give eventually. The only surprising thing about the fact that it finally happened is how long it took to get here and how short the fall was. Granted, no Corn movie is, like, a masterpiece, but the dip from "surprisingly watchable" to "mostly watchable" isn't as steep as I've been fearing. 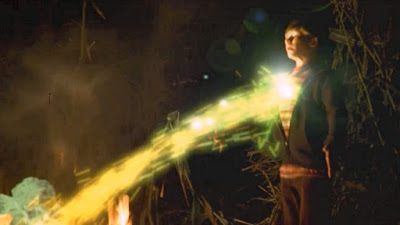 I'm just really scared that the longer we wait, the more it's gonna sting when the other shoe finally drops.

In Children of the Corn V: Fields of Terror, after we see two different couples murdered by possessed child Ezeekial [sic] (Adam Wylie of Child's Play 2) and his gang of corn kids, a group of four college  kids (although one of them is explicitly 17, so she must be one of those Young Sheldons) on a road trip to spread their dead friend's ashes break down in the middle of a corn field just outside of the town of Divinity Falls (lol geddit?). This is the most blatant slasher movie setup we've seen from any of these movies, so the only shocking thing about this structure is how very very long it takes for the murders to kick in after this.

Luckily, we do get our share of shocking plot twists along the way involving the main girl Allison (Stacy Galina), who realizes that her long lost younger brother may have been inducted into the cult of children who worship He Who Walks Behind the Rows (he's back, by the way!) at a local farm run by Luke Enright (David Carradine, who sits down for this entire performance). The other kids have their own sort of drama, but we all know they're just here for body count: we have Greg (Alexis Arquette, rocking a Jamie Kennedy look pre-transition), the nerdy annoying guy whose presence in this group can probably be attributed to the fact that he owns a car; Tyrus (Greg Vaughan), the requisite horndog asshole; and Kir (Eva Mendes, the third recognizable name in the credits, and by far the famous at the time of writing), the girlfriend of the deceased who's a shallow Clueless-esque princess with a rambling pile of hair that you just long to get lost in. 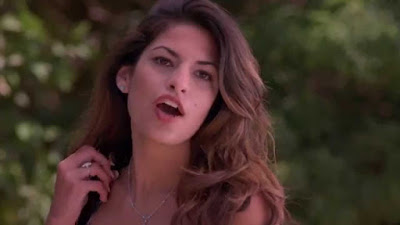 I desperately hope that she and Ryan Gosling have gotten drunk and watched this movie together.

Probably the most interesting thing about Fields of Terror is just how un-interesting it is. This was a slasher film released in 1998, two years after Scream done changed the game and made it a requirement for the genre to be laden with in-jokes and meta humor. This is the year that gave us Bride of Chucky, I Still Know What You Did Last Summer, Halloween: H20, and Urban Legend, for crying out loud, and this franchise has the audacity to give us a straightforward rural breakdown slasher as if we were still deep in the trenches of 1986. There's something almost wholesome and charming about how unpretentious and standard this whole concept is. Almost.

But let's not forget that the bog-standard DTV slasher flick is exactly my comfort zone, so I'm not pretending that a movie being a mediocre entry in the subgenre brings me anything but joy. I think it's pretty objectively the worst film in the Corn franchise thus far, but it operates at a low simmer that renders it at least mildly entertaining for the bulk of its run time. It doesn't hurt that the cast still features a surprising cadre of reasonably famous actors (Kane Hodder also has a cameo as a bartender in town). Nobody here is saving the movie like Karen Black or Naomi Watts in the previous one, but the sheer act of recognizing a face in one of these movies is satisfying in its own way. 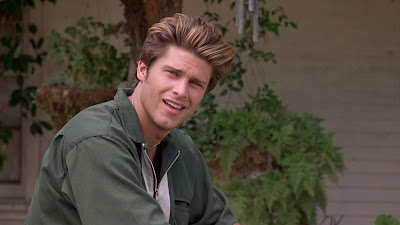 And even the faces you don't recognize are VERY pretty.

And at the very (very) least, director Ethan Wiley (whose previous feature was the infamously titled House II: The Second Story)  is trying his best to spice up the proceedings. Sometimes this means some harsh blue lighting intercut with lightning flashes that creates a pretty sinister mood in an early murder sequence. Sometimes this means turning the camera sideways for no apparent reason other than to have the camera be sideways. It's on and off, but the first shot (a rather elegant slow motion image of a rose being plucked from a corn field) is a pretty solid exemplar of what Wiley is going for an intermittently achieves.

Unfortunately, while no Children of the Corn has been bursting at the seams with cash, the budget seems to have truly strangled this one. There is exactly one showstopping effects sequence that recalls the terrific work accomplished in Urban Harvest, but the way it's shot and edited is too muddy and garbled to really make it worth the effort, and nothing else in terms of effects or kills is especially memorable. There is a silly moment involving dumping a severed foot into a body bag that's fun, I suppose. It's just not really bringing it in terms of the kills, which are oh-so important to the slasher format and oh-so absent from the larger part of this movie.

And it's far too much to ask this film to be scary in the least, but I will say that Adam Wylie easily plays the best child cult leader since John Franklin's Isaac four long movies ago. He doesn't quite manage "creepy," but the flinty command in his voice makes the power he holds over the other kids (especially those older and taller than him) completely believable. It's a potent performance without much nuance, but it's certainly the best in the film, and we all need something to latch onto in a movie like this where creepy subplots constantly crop up and slither away from reach before they can resolve themselves (there's literally a line about a bungee jumping accident maybe being an elaborate suicide that is completely forgotten, when the whole movie could have just been about that).

It's certainly the most frustrating and least appealing of these movies, but a meat-and-potatoes supernatural slasher sequel at least fills you up. I won't be revisiting this one for any reason other than to gaze in wonder at Eva Mendes' hair, but I'm not upset that I've seen it, which is more than I can say for a lot of films in, say, that Amityville marathon from last year.