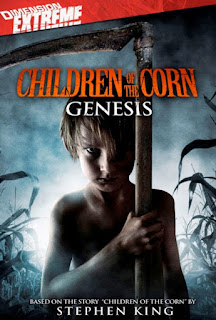 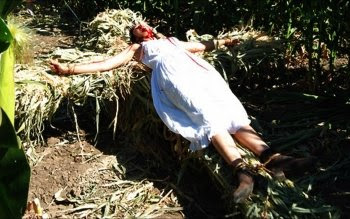 I don't and you can't make me.

So, in Children of the Corn: Genesis, nothing in particular is genesis-ed and there's barely any children. And like one scene involving corn. Yet somehow, this is more related to the franchise than Part IV, so we soldier on. The film kicks off after an unrelated prologue about kids running around with sharp objects in Gatlin, Nebraska. Tim (Tim Rock) and Allie (Kelen Coleman), a young married couple expecting a baby, break down in the middle of the California desert. They're forced to stay overnight in the nearby shack of a hermit known as Preacher (Billy Drago, the only recognizable name in the cast, which is saying something) and his Ukrainian wife Helen (Barbara Nedeljakova).

Things didn't seem particularly kosher in the first place, but things prove to not be what they seem when Allie discovers a child locked in the garden shed. When a supernatural force uses telekinesis(?) to trap them in the house until dawn, they are slowly driven apart by their own suspicions and secrets. Sort of. Mostly. And I guess this force wants her child to help create a new cult to worship He Who Walks Behind the Rows? In cornless California? Or maybe it wants a new mom for the kid it already has? Maybe that's it.

Look, past the first thirty minutes the plot is so far beyond the pale of legibility that you're lucky you're getting a second paragraph at all.

Children of the Corn: Genesis makes no goddamn sense, OK? The plot is piled thick with reveals and twists and what have you, but the more they come the more they contradict one another, until you get to the point that twists are being revealed about characters or situations you didn't realize were in the movie in the first place and for which this change of context means absolutely nothing.

And yet, this is the best one since Part V, which probably says more about the franchise than it does about Genesis. But at any rate, even though you've got to control-alt-delete your brain and force quit it midway through, this movie is surprisingly charming and likable. The plot twists don't really work, per se, but they do keep you engrossed all the way up until they dump you on the cold hard ground with absolutely no payoff.

Plus, the filmmaking is certainly competent. It has that very sheeny-shiny slickness that marked low budget studio filmmaking in the early 2010's, and while I wouldn't say it has a style, it certainly has an oppressively dark atmosphere and claustrophobic set design that aid it in many ways. And while there are almost no gore effects to be found outside of the opening prologue (which has some decent corn-based mayhem), the telekinesis effects are organically integrated and feel entirely plausible within this world, save for the biggest setpiece which looks awesome but hedges its budget in a way that's entirely noticeable. But this isn't so for the best setpiece, which I hesitate to spoil except to say that somebody goes flying like they stumbled upon a glitch in Skyrim.

Full disclosure: I've never played Skyrim, but I want to sound cool. Is it working?

But let's get down to brass tacks. This is a horror movie, ostensibly. Is it scary? Mostly the answer is no. There's literally a scene in an outhouse where Allie has to keep stopping her pee stream to listen for a spooky noise she thinks she heard. And one of the biggest sources of tension as we get into the second act is whether or not Tim can screw a camera onto a tripod in time. It's not exactly The Exorcist.

But those are the times when Billy Drago isn't onscreen, because for every second that he is, the film is plunged into a dark unknowable space by his incredible villainous performance. He's giving a vocal and physical performance that drips with unknowable menace (helped along by the fact that his character is literally unknowable, as the script never really figures out who or what he is). Just the way that he stands in relation to Allie makes your skin crawl; he's like an alligator, seemingly lazy and aloof but coiled to strike at any time. In fact, he's giving what I'd probably call the single best performance in the entire series, giving us the only truly great villain since John Franklin in the very first Children of the Corn.

Although it feels disingenuous that an old man is the only source of fear in a franchise literally and explicitly about children being creepy.

It's hard to tell if I recommend this film or not. I wasn't bored for a second, but it's kind of not a movie. It can't fall apart, because nothing was solid to begin with, but it flows ceaselessly with no particular destination in mind and just seems to end as soon as it runs out of money. It doesn't overstay its welcome, and I bear absolutely no ill will toward it, but I don't think I'd send anybody out to see it specifically. It's a movie you need to stumble upon, say, as an oasis in the middle of a particularly challenging movie marathon.

Maybe I'm just addled after the hat trick of Isaac resurrecting himself to shout nonsense at Nancy Allen, some random grandma in an apartment complex, and a remake that is 85% screeching. But hey! I'll take what I can get!