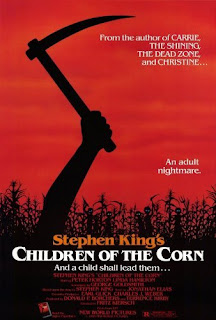 Happy Halloween month, everybody! You know I can't resist me a good franchise marathon when the spooky season rolls around, but what's a boy to do when he's already covered Freddy, Jason, Michael, Leatherface, Chucky, Pazuzu, and 112 Ocean Avenue? Well, luckily (or probably unluckily) for me, the horror genre can't resist pumping out a coterie of sequels for any old random title that makes money, which brings us to Children of the Corn and its legendary, decades-spanning run of 10 films. That's the franchise that'll be providing my suffering for your entertainment this year, so let's start with good ol' number one and see if it's gonna be a trick or a treat to kick off the season. 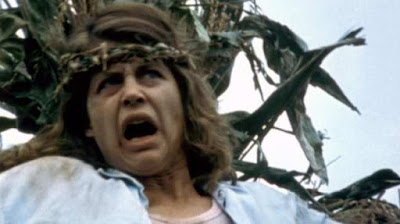 Loosely based on the Stephen King short story of the same name, Children of the Corn tells the tale of young med school graduate Burt (Peter Horton) and his girlfriend Vicky (Linda Hamilton, ever-so slightly pre-Terminator). They are traveling to a small Nebraska town where he has gotten a job, but through a series of increasingly eerie circumstances, they wind up stopped over in the ghost town of Gatlin, where the children have murdered all the adults and worship the mysterious entity known as He Who Walks Behind the Rows. The cult of tykes is led by the charismatic despot Isaac (John Franklin) and his right-hand man, pubescent enforcer Malachai (Courtney Gains).

They investigate the town, and over the next 45 minutes Burt conclusively proves that you don't need to have a brain to graduate med school. 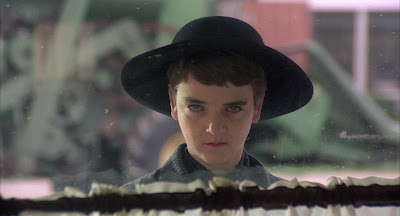 And you don't need a hat to be a creepy child cult leader. But it helps.

The thing that boggles the mind about Children of the Corn is exactly how it became a classic in the first place. I think the name "Stephen King" has the a lot to do with it, and eventually the name "Linda Hamilton," but by all measures CotC is a very slight film. It's split roughly into halves: First we see the origin of the mayhem in Gatlin and establish the relationship between Vicki and Burt. Then they arrive in the town, discover its secret, and set out to vanquish a demon, all over the course of a single eventful day. When the credits roll, it feels like you've watched about 70 minutes of a movie that was supposed to be quite a bit longer. Now, being brisk is hardly a sin for a movie (especially in my eyes), but the narrative is malnourished in a few important ways.

For one thing, the central relationship is unusually well-established for a movie of this ilk, but only in the first twenty minutes or so. Hamilton and Horton have a warm, lived-in chemistry that is satisfying to bask in, and they feint at subplots about Burt being afraid of commitment and both of them maybe being resentful of having to move to such a small town, but all of this is forgotten by the time they reach Gatlin. There, our heroes are split up for pretty much the rest of the movie and never get any actual conflict resolved beyond the immediate physical threat to their persons.

We also don't get to see enough of the inner workings of the cult of children to really understand how dreadful life has been for them since the change. This is largely because we spend the most time with Joby (Robby Kiger) and Sarah (Anne Marie McEvoy), two children who are specifically separate from the rest of the pack. There are occasional cuts to dissension brewing between Isaac and Malachai, but this subplot is painted in strokes so broad you could fly a crop-duster through them. 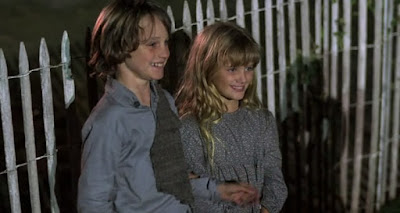 Curse these little moppets for getting their Spielberg all over my King!

But speaking of Isaac and Malachai, therein lies my biggest theory why this film has made any sort of lasting impression on the culture at large. Isaac is played by John Franklin, who was in his early twenties at the time of filming, although he retained a childlike appearance due to a growth hormone deficiency. His performance is incredibly satisfying, physically highlighting Isaac's childlike features, but retaining every nanosecond of his adulthood in the boy's eyes and voice. Isaac is a character that seems wise beyond his years (for good reason), haunted by a look that no child should ever have. Franklin's performance is incredibly creepy, and iconic for good reason.

Malachai is iconic in his own way, too, though probably because he reminds everyone of their childhood bully. His pubescent squeak and gangly limbs combined with his physical menace are another rough juxtaposition, this time of a child clearly trying to act beyond his years, instead of the other way around.

Beyond that, Children of the Corn is truly valuable for one scene alone, and it is the introductory sequence where we get to see the children murdering all the adults in a diner. It's the goriest moment in the film (later, most of the blood is tempera paint red and thrown in splashes from offscreen) and by far the most brutal and creepy. It's also the Stephen Kingiest, not shying away from the taboo, stomach-churning topics like, oh... children murdering the sh*t out of their parents. 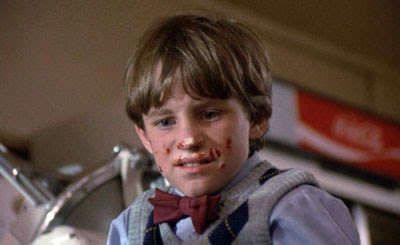 That's not ALL strawberry milkshake.

Everything else in the movie is just kind of... fine, or at least good thing that is undercut by something slightly nefarious and - is it hacky to use the word "corny?" For example, the creepiness of the children being interrupted by Joby's weirdly chipper, entirely unnecessary voiceover narration. I do like the score, which utilizes a choir of children to good effect, but it's counterbalanced by the hilariously low-grade effect that bring to life [sic] He Who Walks Behind the Rows. It looks like somebody drew a demon in an Etch-a-Sketch and shook it up halfway, which in turn undermines the actually almost creepy effect of the entity moving under the soil like the groundhog from Caddyshack.

All in all, I enjoy myself during Children of the Corn, and it might not always be for the best reasons, but who's to turn down a movie that's enjoyable? It doesn't have a whole lot of meat on its bones, but I suppose that's what you can expect from a corn-based diet anyway.