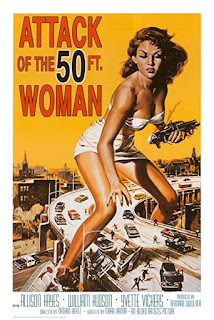 It's a big day here at Popcorn Culture and our fifth annual Cardboard Science crossover with Hunter Allen of Kinemalogue. We're onto the second 50's sci-fi film he assigned for the season, and it's the first time we've ever had a repeat director! That's right, shlock auteur Nathan Juran (operating, as per usual, under the name Nathan Hertz) directed previous Cardboard Science entry The Brain from Planet Arous, another low budget gem I liked against all odds. For the first time, we're being given the opportunity to not only look at the 50's as a zany whole, but at one particular director and how his involvement in it evolved over the years.

Two things are already immediately apparent. First, his run times are deliciously brisk. Second, he certainly knows how to title a movie, because today we're here to talk about Attack of the 50 Ft. Woman! 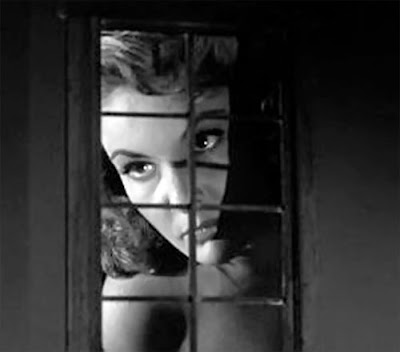 Pictured: Me to any apartment that's watching this movie.

With a title like Attack of the 50 Ft. Woman, you'd think the plot would be pretty self-explanatory. But that's where you're wrong, because you should never assume that a movie like this has the budget for a 50 Ft. Woman. So, here we have Nancy Fowler Archer (Allison Hayes), a rich heiress who is hopelessly in love with her lecherous, money-grubbing dolt of a husband Harry (William Hudson). Harry can hardly be bothered to look at her, and he spends all his time at the local bar openly making on his mistress Honey (Yvette Vickers).

When Nancy finally blows her top and ditches him, she drives to their secluded home through that same endless stretch of Santa Clarita desert where they filmed all these movies. Wouldn't you know it, but she just so happens to come across an alien spacecraft and she runs back to town babbling about its occupant, a thirty-foot giant. Harry sees her encounter as an opportunity to have Nancy, a famous drunk, committed. He wants to inherit all her money and drive off into the sunset with Honey, but his plans - which quickly turn murderous - don't go so well when radiation turns Nancy into a jealously violent fifty-foot monster hellbent on getting her husband back.

Now, most reviews you'll hear of Attack of the 50 Ft. Woman will lament how very little attacking of 50-ft. women there really is. But those reviewers are fools for thinking that a 50's B-movie will live up to a title or an incredible poster (and what a truly incredible poster we've been given this time). What they're completely ignoring is the delicious melodrama right before their noses. Allison Hayes enters the frame working at an 11 and she doesn't let up for a single second that she's onscreen, gnashing her teeth, bulging her eyes, and leaning dramatically against doorjambs at every opportunity.

Everything in the movie works along with her to whip the drama into a constant fit of pique, from the delightfully vile sourness Yvette Vickers gives to Honey to the transparent machinations of Harry - who literally steals a diamond straight off his wife's neck while pretending to tuck her into bed - to a news report about Nancy's alien sighting that throws so much public television shade that it's shocking you can even see the frame after the anchor completely wrecks Mrs. Archer.

I honestly can't resist sharing his Gossip Girl quote in full, it's that f**king brutal: "From the Archers' palatial home away from home comes a report that Mrs. Archer has not only to be seeing a sociable satellite, but its inhabitant as well: a 30-foot giant. Was he pink with big ears and tusks? Well, maybe Mrs. Archer, who has recently been feuding with her husband, Handsome Harry, has finally found a man from out of this world, a man who could love her for herself. Come, come, Mrs. Archer. A man can ignore one million dollars: but, fifty million! That's too much to ask even from the man in the moon!" 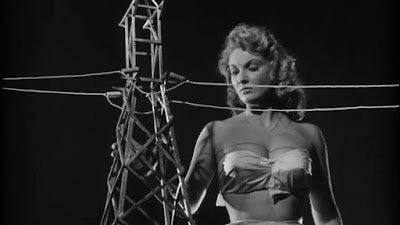 And buried beneath this scrumptious mountain of camp is a surprisingly trenchant observation of the fate of women who don't behave as they ought. Mrs. Archer is telling the truth, but nobody even gives a second thought to believing her. The men seek to discredit her as "hysterical," and she's already been institutionalized once before for being upset that her husband is a philandering bastard. Her money gives her license to be confident and speak her mind (her tax dollars are the only reason the sheriff patronizes her enough to investigate her claims in the first place), but society doesn't like that and seeks to shut her down at every opportunity. And when her claims are finally proven true, she is chained up, chased down, and shot at. The police, the medical establishment, and every other man in her life can't possibly begin to handle what she's going through.

It's actually pretty easy to draw a straight line from The Brain from Planet Arous to Attack of the 50 Ft. Woman. Both are shoddily made, loosely plotted B-pictures with surprisingly licentious male characters (especially for the time), and both have a lot more thrumming beneath the surface about the societal landscape shifting away from the clean cut 50's and the cookie cutter suburban American dream. Perhaps the most metaphorically powerful moment comes when Nancy escapes from her bonds and goes on her final (read: only) rampage, destroying her entire house in the process. She finally lets go and goes for what she wants (namely, her husband to stay by her side and not be a sleazebag loser), but the effort it takes to break the shackles of society cause the implosion of her life - the destruction of her literal home representing the death of normalcy and her domestic American dream. But for ten blissful minutes, she can't be ignored, and that's maybe worth it after all.

Now, mind you, this rampage doesn't really look very good. The effects are crummy as all get out, except for the few shots where she gets to interact with actual models. The superimposed shots of the giant looming over buildings have that dodgy 50's transparent look, and she walks with this frustratingly slow, overly careful gait that was probably required to make it look even as unconvincing as it was. At least her outfit is an impeccable bit of retro glam adventure movie fun, kudos to the costume designers out there working their butts off.

And I don't need to tell you the science fiction elements of the plot make no sense (why introduce a male giant who's stealing diamonds, only to have him wander off halfway through the movie?). 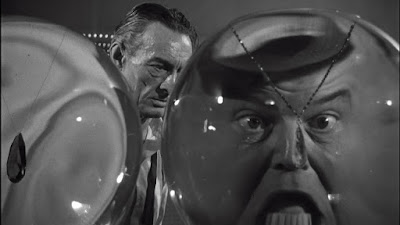 Also this shot of them discovering his diamond collection likewise parallels Arous. I guess ol' Nathan loves distorting faces through glass, and I can't say I mind.

Honestly, I kinda almost sorta loved this movie, and I would be giving it maybe the best score of the bunch if it wasn't for one thing. Nancy gets sidelined for at least twenty minutes while she's sedated and chained up in her bedroom, and the antics of the men trying to figure out how the hell she got this way just don't compare to Hayes' inimitable performance. Shunting her offscreen immediately drains the energy from the narrative, both on a subtextual level and on the level of just plain interest.

And I haven't quite decided how I feel about the wacky comic relief deputy yet, but I'm erring on the side of liking him, if only for an alarmingly well-executed in-camera stunt where he almost runs over the main characters with his police cruiser. As it stands, even with its many many (many) flaws, Attack of the 50 Ft. Woman is a shockingly socially conscious thriller that sweeps you up with its goofy machinations. Sure that title is a cheat, but it's a tremendously satisfying romp that flies right past your eyes at the speed of light. I couldn't possibly complain about that.