Cardboard Science: At A Deadly Pace

Round 2 of the 7th Annual Great Switcheroo with Hunter Allen at Kinemalogue. 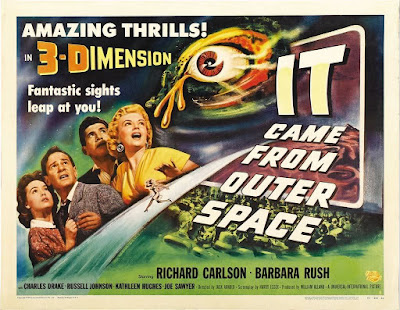 I'm always excited when Hunter assigns me a 50's sci-fi film that was mentioned in "Science Fiction Double Feature" from The Rocky Horror Picture Show, much in the same way that I was always excited to cover a college slasher mentioned in Randy's rant from Scream 2. I just like to understand references, OK? So far he's been meting them out with incredible patience, considering this is only the third one we're covering for Cardboard Science! (Night of the Demon, which is also referenced, was also covered for other reasons). But not only does the 3-D film It Came from Outer Space bear that particular distinction, it's an entry from 50's B-movie golden boy Jack Arnold, who also directed The Incredible Shrinking Man, Tarantula, and The Creature from the Black Lagoon.

In fact, it seems entirely likely that this film was the project that got Jack Arnold the gig for Black Lagoon, certainly his better known 3-D work. But enough about the behind-the-scenes fluff! Let's get on with the show!' 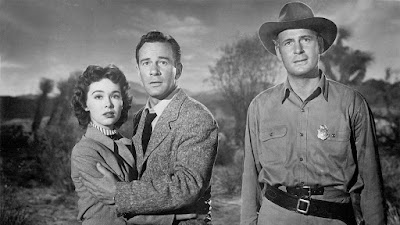 Put on your shitty cardboard 3-D glasses that will dig into the tops of your ears, and get ready to rock!

It Came from Outer Space opens with a giant meteor crash landing over a small town in Arizona, witnessed by astrologer John Putnam (Richard Carlson), who is brash, headstrong, and a fervent believer in scientific progress for the greater good, and his girlfriend Ellen Fields (Barbara Rush), who is a woman. The meteor just so happens to be an alien spaceship, although nobody in town actually believes John's claims (including, briefly, Ellen, who he refused to allow to come down into the crater with him because she was born with a vagina).

However, the aliens seem to be kidnapping local townsfolk, including telephone repairman Frank (Russell Johnson, best known as the Professor in Gilligan's Island), and disguising themselves as them in order to gather supplies to repair their spaceship. John desperately wants to find out what they're up to and prove his discovery not to be a hoax. But frankly, they couldn't be less interested in humanity as a whole and really just want to get out of this dump we call Earth. 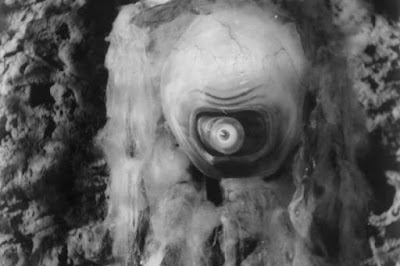 And especially in 2020, who wouldn't agree with them?

It Came from Outer Space is certainly most notable for the way the aliens palpably just don't give a shit about what humanity is up to. It's a unique approach to the story (from the mind of Ray Bradbury, no less) that the visitors from another planet are neither friend nor foe. Unfortunately this doesn't really drum up much conflict beyond John stoically flailing around. This is an especially talky example of the science fiction B-picture (think The Day the Earth Stood Still but dumber), and the characters who are talking just aren't the most dynamic the genre had to offer.

It's honestly mystifying to me why this film got the 3-D treatment in the first place, other than to drum up general interest. Other than the meteor and the pleasantly protruding eye stalk of the hulking, yeti-like aliens (the few times we actually get to see them), the 3-D gags just aren't showing their faces. It does allow for some sets with more depth of field, but other than a mysterious glimpse into the murky depths of the alien spacecraft, we're getting a whole lot of your average suburban interiors. I will grant that the desert roads stretching out behind our characters in 3-D while they drive to the crash site probably look pretty neat though.

But back to that ship sequence. It's uniquely ponderous, the camera wandering into the darkness of the craft unbidden, leaving us to attempt to parse out the murky environs and mysterious noises it produces and providing an eerie, uncanny atmosphere that is actually almost scary. As a matter of fact, It Came from Outer Space is almost scary in a lot of ways. The string orchestra on the soundtrack twists and contorts their sound in a way that predict the more electronic-based scores coming down the pike later in the 50's, and the first gasps of the Body Snatcher effect before you find out what's going on certainly drum up some terrific tension. 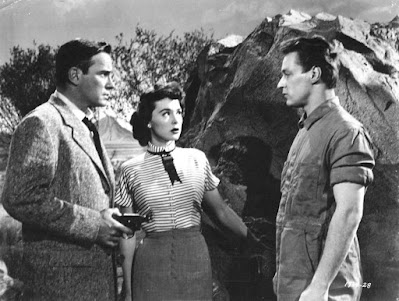 Although, just once I'd like to see an alien in a human body speak in anything other than a flat monotone. They already speak English so it's not much of a stretch. Maybe the aliens sound like Krusty the Clown or something. Have some fun with it!

As an effects extravaganza, I've already mentioned that they aren't quite as committed to spectacle as one might hope, but what we get is generally pretty well rendered, at least. Sure, there are shots like the smoke rising from the crater where you can see the individual puffs being coughed out of the machine in the lower left corner. Or the landslide that somehow causes a bunch of rocks to be poured over the lip of an unmoving cliff. But those are the exceptions. It Came from Outer Space boasts a pretty rad laser-shooting baton, a reasonably convincing and organic alien eyeball stalk, and plenty of Alien Vision, which presents a view of the world through a bubble that mostly just makes things a little muddy and unclear, but is absolutely unique nonetheless (come to think of it, this effect almost certainly works better in 3-D, so that's another point in their favor).

I have watched better body snatcher movies for this project (Invasion of the Body Snatchers, duh). And better didactic moral message movies (The Day the Earth Stood Still). Better movies about It (It Conquered the World). And hell, even better movies about where It came from (It Came from Beneath the Sea). But all in all, there is enough going on here to keep it fresh, even if it's not in support of a story or characters I very much care for.

TL;DR: It Came from Outer Space is a decent moralizing science fiction film, but I wish there were more alien fights, what can I say?
Rating: 6/10
Word Count: 1247