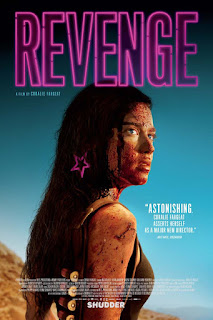 The rape-revenge subgenre of horror is not a fun one. Usually the films are nasty bits of work like I Spit on Your Grave and The Last House on the Left that belong to one of two camps. The first are the kind that use violence as a catharsis to a horrifying act, and the second, much scuzzier, ask the audience to delight in both the rape and the revenge. The point is, whether they have good intentions or bad (very very bad), they're usually borderline unwatchable, and always directed by men.

Not so with Revenge, the debut feature of French director Coralie Fargeat. Fargeat, in addition to being a bright new talent, also happens to be a woman, and that has made all the difference. Switching the perspective of this well-worn and dubious genre makes Revenge a vital and necessary film even if it turned out to be terrible, but the icing on the cake is that it's absolutely not. Let's dive in, because I can't wait. 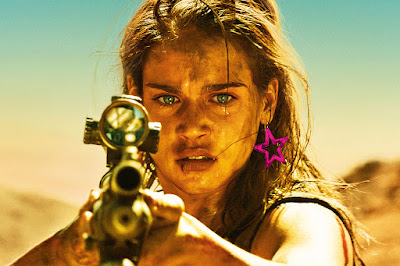 Pictured: Me, demanding that you rent Revenge today.

Like all rape-revenge movies, Revenge has a very simple plot. Jen (Matilda Lutz) is the American mistress of megarich stud/lapsed family man Richard (Kevin Janssens). They're having a dirty weekend at his Moroccan desert bachelor pad when his buddies Stan (Vincent Colombe) and Dimitri (Guillaume Bouchède) show up a day early for a planned hunting trip. Following a night of debauchery, Stan attempts to coerce Jen into sex, then rapes her (thankfully offscreen, though no less harrowing). Instead of helping her out, Richard pushes Jen off a cliff and leaves her for dead so she can't tattle. Understandably, she wants revenge, and thus begins a cat and mouse chase as the hunters realize this week they have a different kind of game; and this time the game is fighting back... 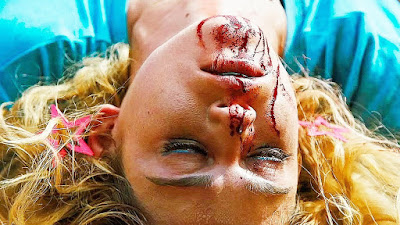 Well, maybe after a few repairs.

If you know anything about modern French horror cinema, you know that they do not skimp on the gore. While Revenge carves its own space out between the French Extremist movement and whatever new path Fargeat is taking international cinema on, it stills provides plenty of that red red krovvy, to the point that those with weak stomachs should probably grab a Pepto-Bismol along with their popcorn.

There's enough blood in this movie to keep the Red Cross fully stocked for a month, and certain moments will even make hardened gorehounds' skin crawl. But it never quite crosses past that line from being fun to harrowingly bleak, like Inside does with wicked glee. Mind you, there is one stomach-churning sequence with a foot that feels completely gratuitous, but it leads to one of the best gore gags in the movie later on, so I ain't complaining there. For the most part it's never so brutal that you want to turn it off and forget it ever existed; it's just an energizing display of effects that fuel the action to even further heights. 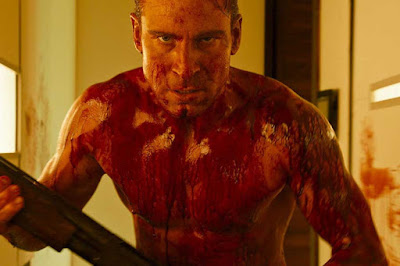 Also taking off Kevin Janssens' shirt in any situation is always a good thing.

So yes, the gore is great, but with such a pared-down plot, Revenge needs just a touch more to feel like a complete cinematic experience. Luckily, Fargeat knows exactly what she's doing, injecting pure style into every frame of the film. The One Perfect Shot Twitter account probably crashed when trying to pick one for this movie (as a matter of fact, they picked three), because almost every frame is a painting, delicately using light and color to give its characters and the beautiful Moroccan desert every ounce of glamor it's possible to bestow.

Down to even editing and shot choice, nearly every aesthetic detail in Revenge is perfect. It fuels the horror when it needs to, especially in the case of its many extreme close-ups (I'm not kidding when I say you'll be absolutely terrified by a shot of an ant, and not in the way you might expect), but it also provides the fun. Revenge has a lot of dark content, but it presents it all with such elegance and swagger that you can't help but be swept up in Jen's journey and feel for her every step of the way.

The really interesting thing about the glamorous aspects of Revenge though, is the fact that, while it does objectify Jen in the first act, the way it does this is something I've never seen before in quite the same way. Fargeat alternates between extreme close-ups of Lutz's body and her face, in such a way to remind people that she has an identity and isn't just an ass. But not just that, the shots of her body are edited in such a way that they feel like a thing completely separate from Jen. They are alien pieces of flesh, used by others, but not truly belonging to her. In fact, the only time the camera swoops across her entire body as a whole is when she first begins to gain the upper hand and sets out to exact her revenge. Then and only then does the camera recognize her beauty and her totality. It's stunning, subtle work that deserves immediate and permanent recognition.

Plus, it's just freaking gorgeous, and we need more of that in these hard times. 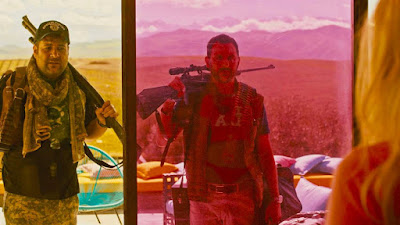 Oh, also the accent windows in the production design are genius too.

Revenge is an extremely pure exercise in stylish horror, and I had a bloody good time watching it. It electrifies you from frame one, and while I wish in my heart of hearts that it went even more bonkers in the second act than the slightly-grounded-in-reality chase we get, it does everything it sets out to do with gusto and aplomb. Revenge is a startlingly good debut the likes of which I haven't seen since at least The Babadook, and I'm equally excited to see what Fargeat gives us next, in whatever genre she chooses to explore.

TL;DR: Revenge is a beautifully stylish film that improves the rape-revenge genre with a new perspective.
Rating: 9/10
Word Count: 1027
Also sprach Brennan at 11:25 AM