Now, we couldn't just let an October go by without our annual crossover event between Popcorn Culture's Census Bloodbath and Kinemalogue's Cardboard Science. My good internet friend Hunter Allen has assigned me three more 50's sci-fi flicks and you should head over there later this month to catch his thoughts on my three 80's slasher picks. All three of his films this time around hail from the grand year of 1958, but we'll be starting with the one that's probably the most famous, thanks to David Cronenberg's body horror remake from three decades later. 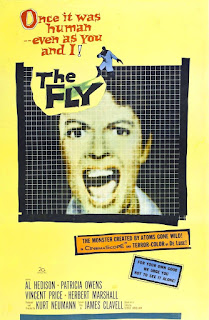 Cardboard Science is a project that really takes me out of my comfort zone. I'm not one to shy away from older films or different genres, but the bulk of my cinema knowledge comes from the 1970's to now, and doesn't really involve science fiction the way that it probably should. But that's why it's important to have friends with different interests from yourself, because it's so important to know where the things that you like came from, and The Fly really gave us a lot more than I would have expected. 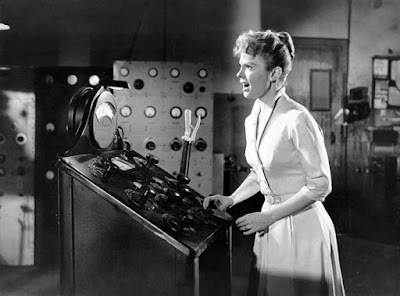 It really tested the capacity of human facial expressions, as well.

The Fly begins with a terrible crime being committed in a Montreal factory. Andre Delambre (David Hedison, probably best known as James Bond bestie Felix Leiter) has been crushed to death in an industrial press and his wife Helene (Patricia Owens) freely admits to being the one responsible. Andre's brother François (Vincent Price) begins working with the police to figure out what happened to this poor couple, eventually drawing a lengthy confession from Helene that seems quite impossible.

In a lengthy flashback, we see Andre's attempts to perfect a teleportation machine in his basement and Helene's reactions to his untoward obsession. One day, when a housefly gets into the teleportation tube, Andre reaps what he has sown with his hubris and finds that his cells have been mixed up with that of the fly. Helene and her son Phillipe (Charles Herbert) must attempt to find the fly with his human cells, the only shot at getting the proper parts back in order. 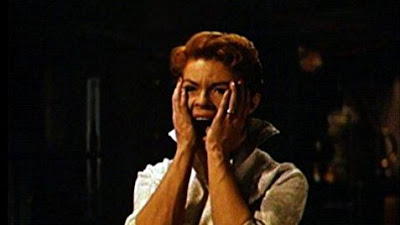 I was trying to avoid too many spoilers, but it's tough for a movie that begins with the end and is literally titled The Fly.

A lot of 1950's movies were remade to great effect in the 80's, including The Thing from Another World and my beloved The Blob. The reason these remakes were so good is that they took the political wiliness of those films and adapted it to modern day fears alongside a heaping helping of top notch special effects. The Fly definitely belongs to this category, but of the source films it's definitely the thinnest. Cronenberg had to add a lot of material to give this film anything resembling meaty subtext, because what we get here is some pretty bog-standard "scientist shouldn't have played in God's sandbox" boilerplate.

That's not to say that this is a bad thing. The Fly might be rather shallow, but it has a lot to show for it. For one thing, much like I Married a Monster from Outer Space, it positions its male lead in the monstrous role, almost incidentally causing the film to have a female protagonist. Even now, that's rather hard to find in science fiction, and I appreciate the opportunity to see one whenever it's given.

For another, The Fly embraces its position as a meat and potatoes shocker, wringing tension almost miraculously out of its charmingly low budget. For one thing, the murder mystery opening plot (as bizarrely structured as it is) doles out hints of just how buck wild this situation has gotten at a brutally steady drip. And before Helene finds out the truth, Andre spends his time with a blanket over his head, grunting in desperation to get his wife to understand. If anything, this is even creepier than the eventual reveal, because something is clearly perilously wrong but everything about the situation seems so mundane and domestic at first glance.

Who knows, this could just be an elaborate sex game or something.

There are really only two special effects sequences of note here: one featuring a rather dodgy fly head that is redeemed by its clever depiction of Helene's scream as viewed through multifaceted insect eyes, and the other... Well, the other is probably the most iconic element of this film and that's for a reason, my friend. I shan't necessarily spoil it, but you know what scene I'm talking about, and even though you can see some of the strings sixty years later, it's still bone-chilling. It's particularly gruesome and nihilistic for a film of this vintage, using its fantastical effects to show how very wrong a path a man's hubris can lead him down.

While I wouldn't say the whole movie is like this, The Fly does definitely have a rather intense approach to some of its material. The opening murder is pretty brutal and slathered in stage blood, and the hopelessness of the whole situation is certainly not lost on its participants. And there are actual, permanent casualties, including but not limited to the Delambre's poor pet cat.

What it lacks in substance, it makes up for by alternating between being a fun sci-fi romp and pure gut-punch nihilistic horror. It's a shame Vincent Price isn't asked to participate in either of these things, though, because he is well and truly wasted as "guy who eventually gets the story to happen." All the insane acting moments are given to Patricia Owens, who does as well as she can, but she's no Vincent Price.

Nevertheless, The Fly is satisfying in a way that a lot of horror of this vintage kind of isn't. It's not afraid to take certain risks, and it's almost wicked in this fearlessness. It's definitely not my favorite of the movies that Hunter has assigned for me, but I'm glad I gained a reason to see it and that I saw it before viewing the Cronenberg version. Watching those films the other way around seems like a recipe for disappointment, because it's so much more stripped-down and inelegant, but the way I see it, it's just peachy with me.