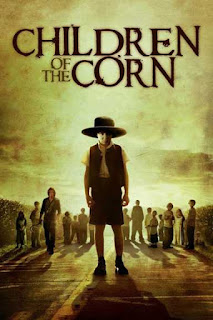 As seems to happen every time we reach this far into a horror marathon, we've reached a natural stopping point. Children of the Corn: Revelation was so achingly crappy that it put a stake in the franchise's heart, seemingly forever. What's a studio to do with a franchise that has fallen flat on its face after seven increasingly cheap films, the most recent three of which were abominable failures? If your answer was "just find another movie to make," you are not a studio executive. A mere eight years later, they vigorously slammed that reset button like a child's NES on a snow day. Thus was begat Children of the Corn '09, a remake directed by the original film's producer and released on the SyFy channel, a mere 25 years after the original film kicked off this long and winding series. 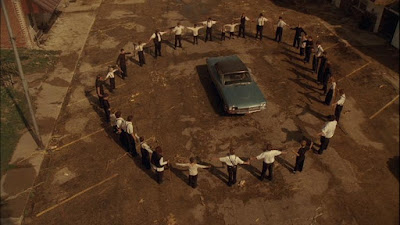 This picture features one child for every film in the franchise.

In many ways, remaking Children of the Corn was the best idea possible at the time. The only things that anybody remembered about the original film were Isaac and Malachai. A middle-aged Courtney Gains just wasn't gonna do the trick, and you saw what happened last time John Franklin got involved in one of these projects. So why not just recast and see what happens by transplanting the story into a modern context? Oh wait, you mean to tell me that this film is set in 1975, a full decade earlier than even the original film? Well, dammit.

Anyway, this film resurrects Burt (David Anders) and Vicky (Kandyse McClure), the bickering married couple on a road trip across the cornfields of middle America. And when I say "bickering" I mean "hollering at each other at the top of their lungs for the better part of an hour." Not only has this movie brought back the characters we knew and loved, it has added a dash of spice in the form of the original short story's severe misanthropy. Hooray. Anyway, they hit a kid with their car, which brings them to the town of Gatlin, which seems to be empty except for a bunch of bloodthirsty kids dressed like they're running rehearsals for the town's Thanksgiving pageant.

The leader of this cult is Isaac (Preston Bailey), a two-gallon boy in a ten-gallon hat, who communes directly with He Who Walks Behind the Rows. His right-hand man is Malachai (Daniel Newman, and I mean man because he was fully twenty-seven years of age at the time of filming). Bad bing bada boom they try to kill the adults. I won't say whether or not they succeed, but remember that this one is more faithful to the original Stephen King material, so you tell me what you think happens. 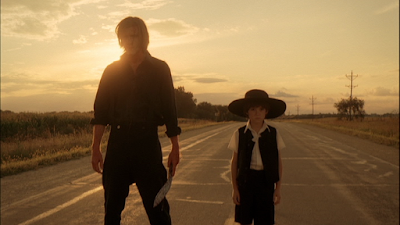 John Franklin might not be present, but the orange filters from Isaac's Return couldn't help but stick around.

The thing about remakes is that, while I have my defenses for a handful of them, they usually suck because they are a pale imitation of a movie that was already great. Children of the Corn '84 is far from great, so a remake wasn't actually a terrible idea. And there are definitely things that this incarnation gets right.

For one thing, Donald P. Borchers is a damn sight better as a director than anonymous craftsman Fritz Kiersch. That's a bar so low even Isaac could clear it, and he doesn't do so with what I would call "aplomb," but you can tell he's at least awake behind the camera. I was especially taken with the opening credits sequence (am I reaching for compliments? Maaaaybe), which introduces its characters in voiceover as the camera serenely delivers close-ups of the interior of the car and the items Burt and Vicky have brought with them on their journey. It's a fun, elliptical way to get to know the characters and situation that actually allows for the audience to pay attention and put together the pieces for themselves.

And though nothing else in the film is as gentle or elegant as this (read: "hollering for fifty straight minutes"), there are still moments that sing. Even the completely pointless PTSD war flashback that lets us into Burt's character not even one inch is a visual marvel, swerving between the wicked reality of cornfields filled with kids bearing sharp implements and rice paddies filled with soldiers and gunfire. That he remembers from serving in Nam, because this movie is a period piece for no reason, might I remind you.

The visual effects are also miles better here. Nothing matches the nutsoid splendor of Screaming Mad George's effects from Urban Harvest, but these are definitely some of the more sophisticated gore gags of the franchise, with realistic blood spurting and dribbling to the point of being almost nauseating. At least in the infrequent moments when there is carnage and mayhem rather than road squabbling. But I digress. Again. Visually, this Children of the Corn isn't a pile of shit, which really makes it a franchise high in that regard. 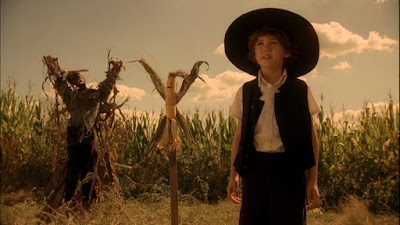 Also I'm pretty sure they're adding an inch to the brim of that hat every time I look away, like a Naked Gun gag.

Two more good things before we dive into the moldy bottom of this corn silo. And in fact, these are two things that I unequivocally love about this movie. First, the children's choir theme that plays over the end credits is a hilarious dubstep remix that's on par with the disco theme from Friday the 13th Part 3D for most misguidedly trendy horror music cue. Second, this movie is not afraid to murder the hell out of a bunch of kids. Hear me out. That shows that the filmmakers were willing to push the envelope in any sort of way, rather than just content themselves with making a middle-of-the-road milquetoast nothing. Mind you that's still what they ended up with, but they tried! It's the thought that counts.

So far the movie I'm describing sounds kind of great. But you didn't have to sit through the entire thing. The acting is uniformly atrocious, featuring the most "3rd grade drama class" performances in a franchise marked by mediocre child performers. The adults hardly fare better, pounding the script's one note so deep into the ground they strike oil.

Visually, this movie might have the chops to earn its keep as a solid entry in the franchise, but the script is thin as tissue paper, relying entirely on your familiarity with the material to keep it afloat. There's nothing about any dynamic here that is more than the most surface-level retread of the short story. The plot limply bats around these hollow Dixie cups called characters with no rhyme or reason. Plus, we get an awful obligatory sex scene that couldn't possibly be more ill-advised.

It's certainly a step up from the last couple legs of this marathon, but it exemplifies a lot of the worst impulses of horror remakes: everything is the same, only bigger and shriller and more unbearable.