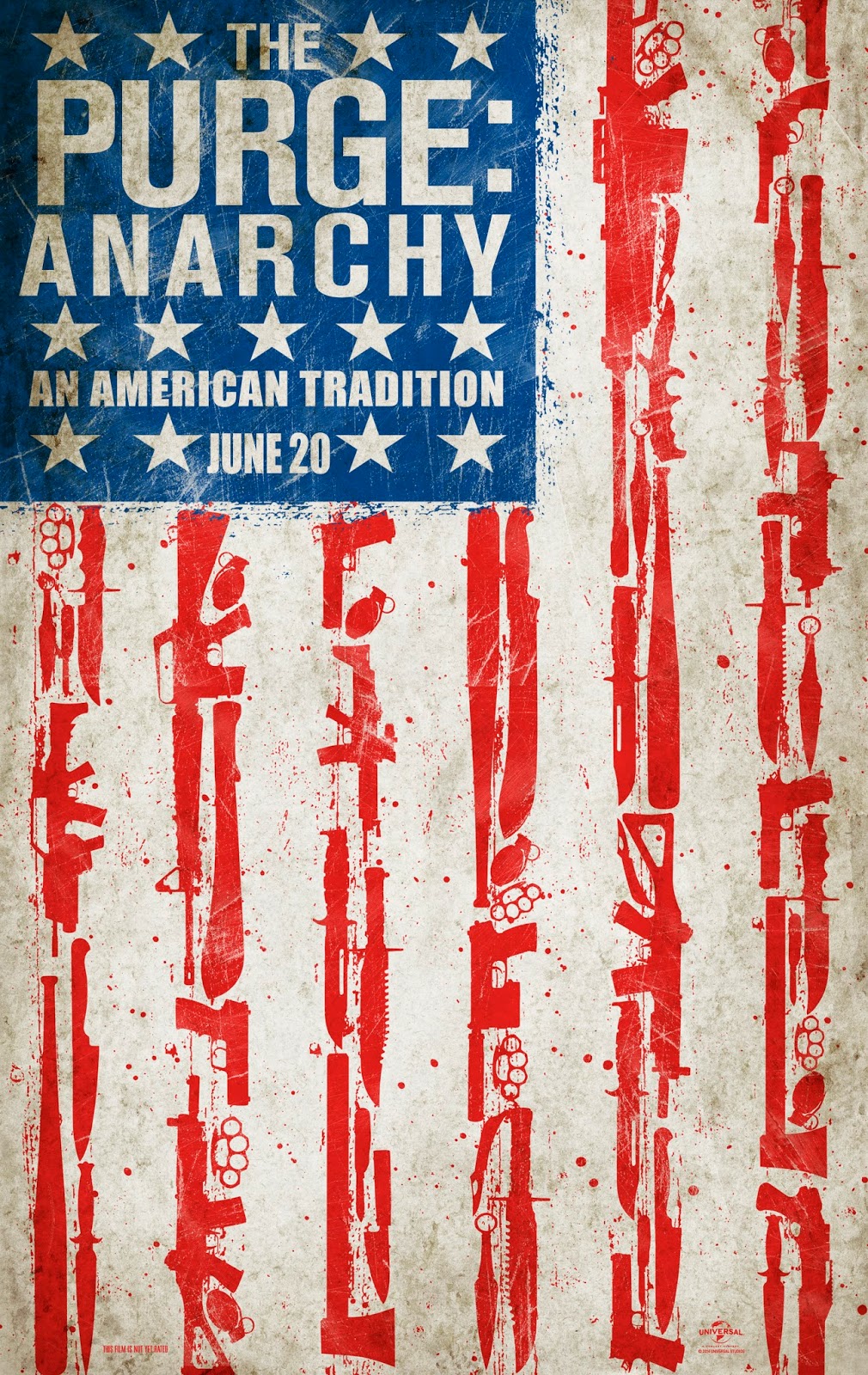 The Purge is a special franchise for Popcorn Culture. The hyper-political hypo-budget Blumhouse production was the first movie ever reviewed on the pages of this here blog and this rushed-into-production sequel marks it as the first franchise to ever be covered here in totum as it is released. I am looking forward to continuing on for many more years to follow other blossoming horror franchises as they appear (Oculus, I'm looking at you).

This is a special moment for me personally, considering my love for bloated franchise fare. Nothing pleases me more than desperate horror series - the backflips and contortions of plot that they commit for the sake of continuity never cease to delight me. But I've missed out on all the notable examples. Nightmare on Elm Street and Friday the 13th were unfortunately produced before I existed. And I got into Saw and Paranormal Activity too late to follow them from the beginning.

So we have The Purge, a franchise with the potential to be either very promising or very disheartening and I don't know which to be more excited for. But for the moment we are facing The Purge: Anarchy, a sequel that is by no means perfect, but improves upon the original film in every single way, and that's literally all we can ask of it. 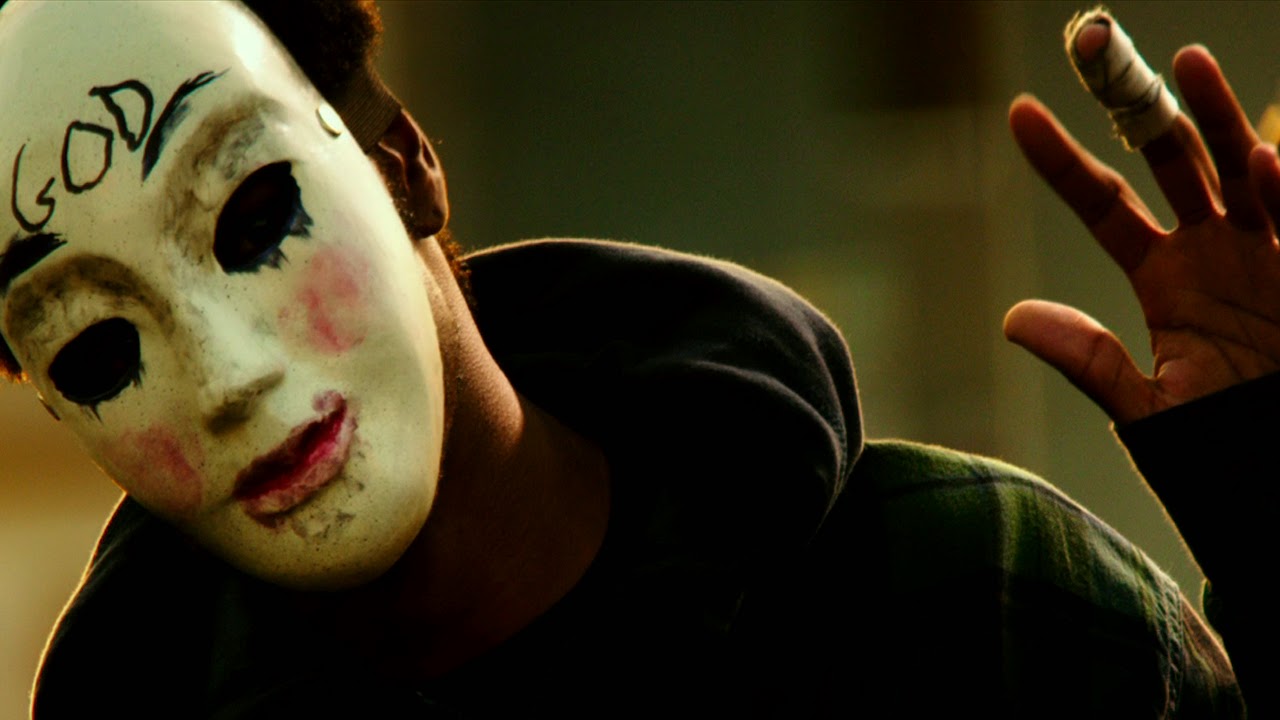 That and ham-fisted political allegory.

I mean, that's all it really is when it comes down to it. The politics are brave and the world-building is capable, but the Purge franchise is first and foremost a fuel-soaked summer blockbuster, tense quasi-horror with a sense of action movie fun about it.

The story immediately announces its scope (the first film had a massive opening weekend but dropped hard like a Skrillex song thanks to terrible word of mouth regarding its lack of interest in the concept) with three distinct storylines that will eventually intertwine.

The first, and most consistent, is the story of Eva Sanchez (Carmen Ejogo) and her daughter Cali (Zoë Soul), two women struggling to make a life in LA. When their apartment complex in the projects is attacked during Purge Night (which I guess I haven't totally covered in this synopsis - this is a twelve hour period every year where all crime, including murder, is legal - this supposedly cuts crime rates during the rest of the year and is treated as a a national holiday by the New Founding Fathers), they become the targets for a mysteriously dedicated group of killers.

Also in attendance is the unnamed (or so I think - the IMDb synopsis would disagree with me, but I'm not about to start anything with mep1019. He comments on more slasher message boards than I do) Sergeant (Frank Grillo, who is an inspiration to us all at a very hunky 51 years old), a dark and mysterious man who is armed to the teeth with both weaponry and a woefully obvious backstory that narcissistically positions itself as a late film reveal.

The third storyline is that of Shane (Zach Gilford of Devil's Due) and Liz (Kiele Sanchez, his real life wife), a married couple going through a separation who are caught outside during the Purge due to circumstances outside of their control. The people who are in control, though, are patiently hunting them across the streets of LA. 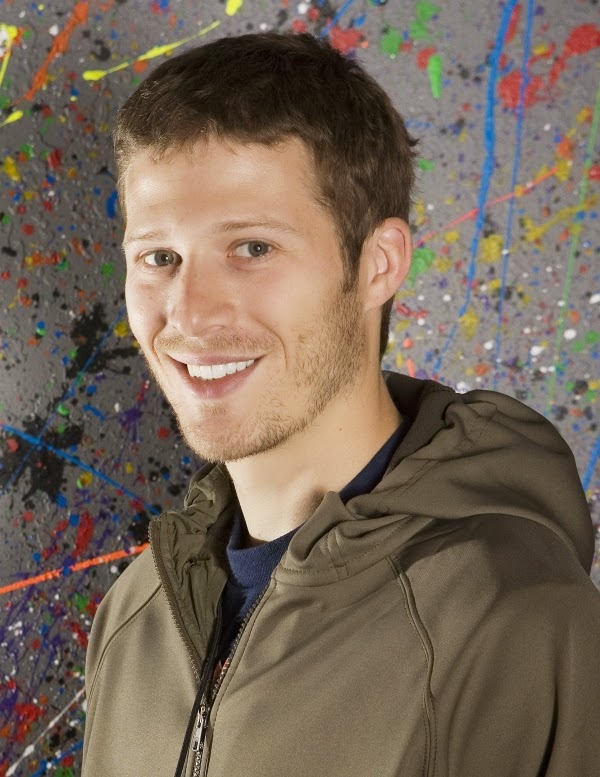 With a face like that, I'D chase him all around LA too. (This is not a screenshot from the film, though I dearly wish it was.)

So these three disparate groups end up coming together for what is essentially a feature length tour of the world of the Purge. It's riddled with flaws, there's no doubt about that, but the picture it paints is a wonderful extension of the one only briefly glimpsed in the original film. The most important element of this franchise is the world-building and the Purge itself is tremendously well-integrated into the production design and dialogue. There is never any doubt that this is a world that has lived with the Purge for years and a country of people who may have different reactions to it, but accept its presence as an annual occurrence.

Where it begins to go wrong is at the story level and especially the performance level. The main group is largely adequate and Grillo and Ejogo provide a solid core for the film (we do lose Grillo a bit toward the end - he's much better as a mysterious badass than the shift he experiences in the third act), but many of the secondary characters just plain aren't up to snuff. Especially egregious is Michael K. Williams as Carmelo, the leader of a resistance faction. He is saddled with the worst of the "let's explain the film's politics in terms that a third grade mollusk could understand" dialogue and as such never comes off as anything more than a dollar store Samuel L. Jackson knock-off.

The dialogue claims many victims throughout the film, perhaps more so than the Purge itself. Thanks to the intricacies of the concept, it never needs to rise above the level of adequate to still be a thrilling movie, but some of the more pernicious examples bore straight into your brain and shatter the "suspension of disbelief" lobe. I won't belabor my point and list these examples, especially because many of them are at least bad-good enough to get a good laugh. But this is a film where people emerge from a car for the sole purpose of demanding a car from somebody else, so you know there's gonna be some issues here. 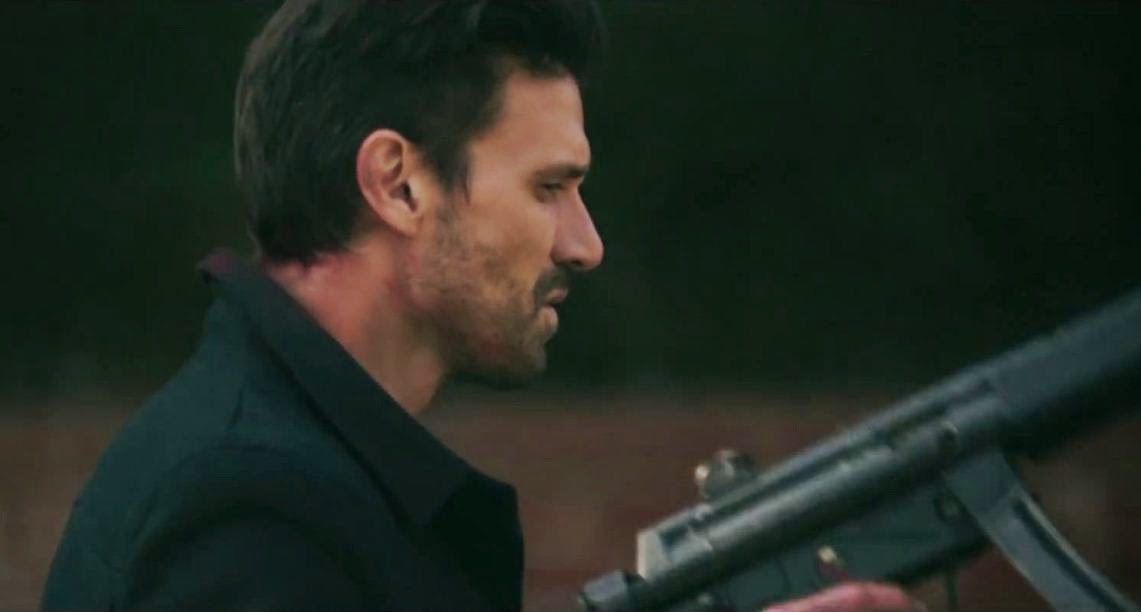 One last grievance is the special effects, which generally settle in as the film gets going, but occasionally look like somebody forgot to render them. An early gunshot wound in particular would feel more at home in an arcade game from 1997. But presumably much of the SFX budget got suctioned off into the multitude of sets and actors and empty cityscapes that The Purge: Anarchy requires and I can't bring myself to complain about that being the priority,

Because it really does its job well of allowing the film to be a rough, tense ride through a city of violence with a harrowing sense of urgency. Widening the scope truly was the answer to improving The Purge and with that done, it can (hopefully) open the floodgates to some legitimately marvelous filmmaking later in the franchise (If The Purge 3 isn't announced within the next week, I will eat my foot).

And it's not like this film isn't already an improvement at the technical level. Although Anarchy and the first film were both directed by James DeMonaco, he really gets into a groove this time. Where the last film's editing and sense of geography was wildly chimerical, here we always have a sense of who is where and why we should be worried about them. The action finale could have been staged better, but for the most part the locations make sense and provide an exciting 100 minutes of adrenaline-fueled entertainment.

Taken by itself, this film probably won't be remembered as a classic of the form over a decade from now, but it's a sequel that did its job - pushing and prodding the original story into something more expansive and vastly improved.

TL;DR: The Purge: Anarchy is a great sequel that surpasses the original film with an expanded scope and more excitement.
Rating: 8/10
Should I Spend Money On This? I'd say yes. It definitely beats the other big blockbuster this weekend. I'd pick a tense LA action film over watching Cameron Diaz's mummy seduce Jason Segel any day.
Word Count: 1379
Reviews In This Series
The Purge (DeMonaco, 2013)
The Purge: Anarchy (DeMonaco, 2014)
The Purge: Election Year (DeMonaco, 2016)
The First Purge (McMurray, 2018)
Also sprach Brennan at 12:47 PM