1988 was not a very good year to be a Jason-style slasher. The MPAA was patrolling the subgenre like a dystopian police state and the interest was beginning to shift. After 8 years of being inundated with the slasher formula, both within and without the horror genre (here's looking at you, Terminator) it was only natural that audiences would be hungry for something else. To rub salt in the wound, the only big slashers at the time were in the more supernatural vein of the still-strong Nightmare franchise.

In fact, A Nightmare on Elm Street 4: The Dream Master would prove to be the most profitable slasher film of the entire decade. So here was Paramount, trapped within an outdated yet set-in-stone formula that just wasn't pulling in the numbers it used to. They couldn't change Jason or his MO. They'd done that once before and were eaten alive by rabid fanboys (rumor has it that 28 Days Later... is actually based upon the true story of a New Beginning test screening). But what they could do was switch out a Final Girl.

No audience alarm bells would go off. They were used to different survivors every time. And the one repeat offender, Tommy Jarvis, was played by a different actor in each iteration. So this was by no means unprecedented. But the Final Girl that they decided on for Friday the 13th Part VII: The New Blood would provide this campy (pun intended) franchise with its most memorable heroine yet... Carrie.

OK, no they didn't get the rights to Stephen King (although I would sell my own teeth to see Jason hacking his way through the Torrance family at the Overlook Hotel). But Final Girl Tina Shepard is blessed with telekinetic powers, one of a mere two elements that bolsters what would otherwise be an alarmingly subpar entry in the franchise. 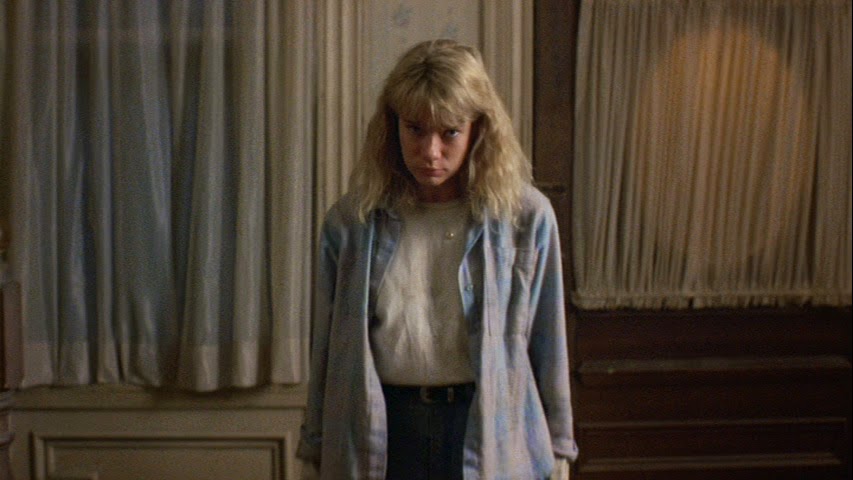 Her hair is not one of those elements.

The film begins an indeterminate amount of time after the handsomest Tommy Jarvis chains Jason to a boulder at the bottom of Crystal Lake (which is recapped in the most efficient opening sequence yet with narration by an uncredited Walt Gorney aka Crazy Ralph). Young Tina Shepard runs away from her abusive father and takes a boat out into Crystal Lake. He runs out trying to stop her, but she uses her nascent powers to destroy the dock and drown him in the lake.

An indeterminate amount of time after that, the teenage Tina (Lar Park-Lincoln) has been institutionalized for her trauma. She is returning to that lakeside house for the first time since that unhappy day, accompanied by her mother (Susan Blu) and the transparently, mustache-twirlingly evil Dr. Crews (Terry Kiser, who played an even more famous corpse in Weekend at Bernie's). Tina only wants to get better but Dr. Crews seems a little too keen on harnessing her telekinetic power.

So we have a New Beginning style plot with a time jump and a teen trying to get over her childhood trauma which is quickly married to a Final Chapter plot thanks to the kids next door. Of course there's kids next door. Jason's a hungry boy, he hasn't killed anyone for a good 20 years at this point (by the way, the multiple time jumps involved in the film's chronology make this very 1988 film set somewhere north of 2001).

Anyway, it's time to Meet the Meat. It's Michael's (William Butler) birthday and all his friends have gathered to surprise him and celebrate. Although an unfortunate run-in with a tent spike prevents him from showing up, a little mysterious vanishing won't stop no Crystal Lake teens, not when there's booze and sex to be had.

Crammed into the lakeside house are Russell (Larry Cox), the rich nephew of the man who owns the house; Sandra (Heidi Kozak of Slumber Party Massacre II), his girlfriend and wallet enthusiast; Melissa (Susan Jennifer Sullivan), the mean slut* who ends up being one of the only people who doesn't have sex in the entire film; Eddie (Jeff Bennett), a militantly nerdy sci-fi writer; Maddy (Diana Barrows), the shy nerdy girl; Robin (Elizabeth Kaitan from Silent Night, Deadly Night Part 2), Maddy's hot friend who recently lost a vicious battle with a hair straightener; David (Jon Renfield), that annoying stoner at every party who won't shut up about weed; Nick (Kevin Spirtas of The Hills Have Eyes Part II), the hunky lad who didn't want to be there in the first place and has eyes for Tina; and Ben (Craig Thomas) and Kate (Diane Almeida), the Token Black Couple who randomly teleport into the film a third of the way through, confess their love for each other, and die in a van.

*For the record, my use of the word slut is not meant to be derogatory, but merely as a character archetype from this kind of genre. 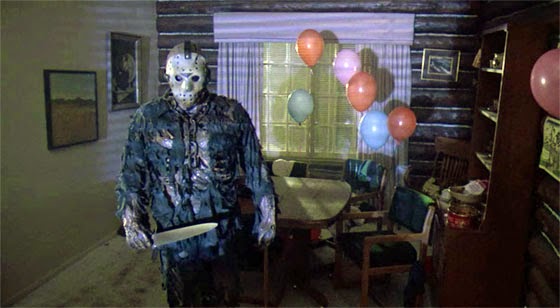 Jason's only mad because he wasn't invited.

So, Jason. In a desperate attempt to resurrect her father from the lake floor, Tina accidentally awakens Mr. Voorhees (Kane Hodder in the first of four consecutive performances) and sends him on his newest killing spree. This scene, and any scene with either Kane Hodder or Tina's powers frequently rank among the best in the franchise, the former providing the film with a truly menacing villain and the former bringing a loopy energy to the affair as Tina tosses TVs around the room and sets things on fire.

Alas, the rest of the film is dull and unexceptional. It's all very typical Friday the 13th fodder. A random couple is introduced early on solely to boost the body count, the twenty minutes before the finale is an endless string of loosely connected death vignettes, girls doff their tops and form the beast with two backs with any dude who happens to be around and breathing (in one memorable sequence, no less than three couples are mid-coitus simultaneously), it's all very been-here stabbed-that.

Although this is generally true of every film in the franchise, The New Blood was absolutely massacred by the MPAA and not in the good way. Typically in a Friday film, the most consistently high quality element (and the part that maintained audience interest) was the gore. Now whatever your moral qualms about that fact may be, that doesn't change the fact that these kill sequences were pretty much the only reasons people watched Jason's misadventures in the first place.

This film is all about cutting away before anything happens or showing the teensiest glimpse of blood in such a brief flash that it almost feels like subliminal messaging. This is especially draconian in the deaths of Melissa and Dr. Crews, who deserved so much worse than what they got for being such consistently monstrous people throughout the entire story. It's watery thin stuff, the gore, and really highlights the franchise's failures at doing just about anything else.

The acting is atrocious, the pacing is plodding, and the entire second act involves Jason teleporting around the lakeside, magically acquiring and losing various implements (including, memorably, a massive tree-trimming buzz saw) as the script demands it. Luckily for this film in desperate need of a savior, it had one hiding behind a hockey mask. 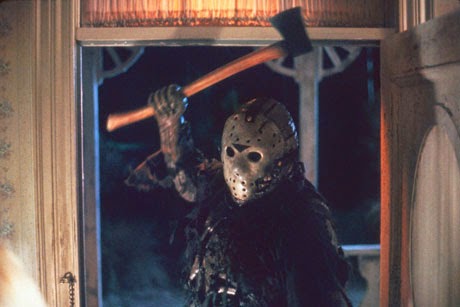 The best way to enter any room.

Kane Hodder has a massive reputation in the horror community not only for being the only person to portray the iconic killer more than once, but for being just the darn best actor ever to wield the machete. It may seem like a simple role, but telegraphing emotion from behind a mask and layers of makeup is a challenging ordeal. Most of the stunt men hired to play the big guy would just settle for walking around quickly and hoping that it looks menacing.

But Kane's Jason is a just plain angry undead serial killer. His performance is full of little tics and reactions that combine with his tremendous bulk to create a truly intimidating Jason for the first time in the character's career. It's a real shame he was saddled with four of the worst movies in the franchise, but Kane's performance is enough to keep the entire franchise going as a continuously rewarding experience even as it sent Jason further and further down the Rabbit Hole.

In addition, Jason has never looked better. Although nothing else in the TV movie-esque sparse production design quite matches the skill of his realization, you can tell special effects designer turned director John Carl Buechler was proud of his creation. In fact, his mostly pedestrian directing only truly comes alive when it's time to show off the intricate details of the costume, including the bits of spine poking out of the half-rotted shirt and the propellor damage that carves away the bottom quarter of the mask.

Everything good about the film can be understood by the terrific finale, in which all the special effects and startling camera tricks (and presumably all the budget) rear their heads as Jason and Tina duke it out across two houses a forest, and the lake. In perhaps one of the best Final Girl sequences ever put to celluloid, Tina truly proves herself as a match for Jason and even a startlingly daft ending can't put a damper on the effects-filled wonderland that forms the closing 20 minutes of The New Blood.

So in the end, it's all worth it, but at the cost of nearly everything that's come before. I still highly recommend The New Blood for any slasher enthusiast, but the fact remains that despite its highs, the lows are too damaging to really consider this a good film, even by the low standards of the Friday the 13th franchise.

Killer: Jason Voorhees (Kane Hodder)
Final Girl: Tina Shepard (Lar Park-Lincoln)
Best Kill: Most of them are meek and bloodless, but Kate getting stabbed in the eye with a party horn is some good slasher fun.
Sign of the Times: Take your pick. There's Tina's mom's feathered hair helmet, 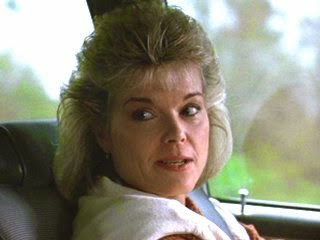 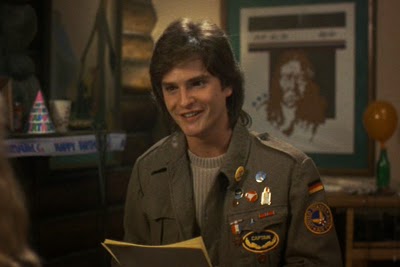 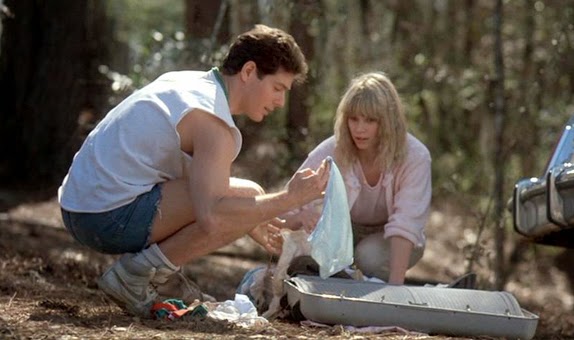 or how about Russell's costume, which indicates that the costume designers had only the most rudimentary notion of the term "preppy" and decided to smother their weaknesses with extra pastels. 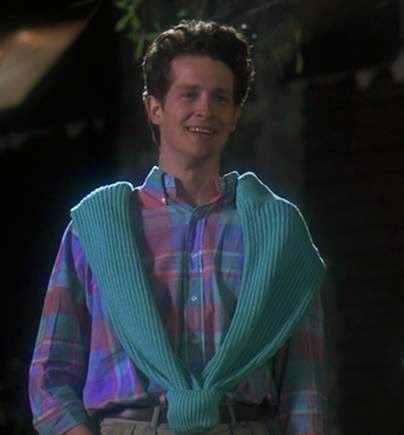