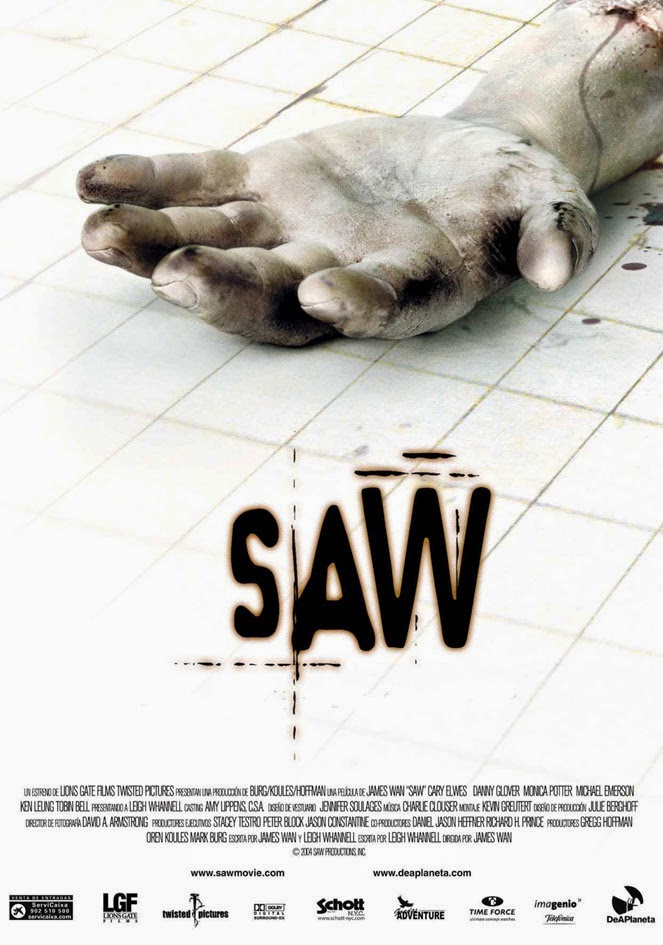 It's a bit uncouth in the film criticism community to share personal stories along with film reviews, but I've never been particularly couth to begin with, and the story of how I came to Saw is a very important part of my development as a horror fan.

You see, I have long denounced the Saw franchise for moral depravity and pointless gore, parroting an opinion I received in abundance during my formative years, during which there was a new Saw movie dropped on the world's stoop every year like a grisly present from a deranged cat. I learned from 22 Jump Street that there is a principle called "embedding" in which your brain sticks with the first idea it is given about a subject (see, movies are good for something), and that's exactly what I've been doing with this franchise.

But recently I decided to make an effort to turn this "blogging" thing into something more resembling a career. And my obstinate refusal to view the Saw franchise was inhibiting my path to becoming a successful analyzer of the genre for an utterly stupid reason. So no, I'm not throwing my morals away. I'm just realizing how misinformed they were. Over the next couple of weeks I will be visiting the Saw movies for the very first time, finally able to mock them for their real flaws instead of their perceived ones. 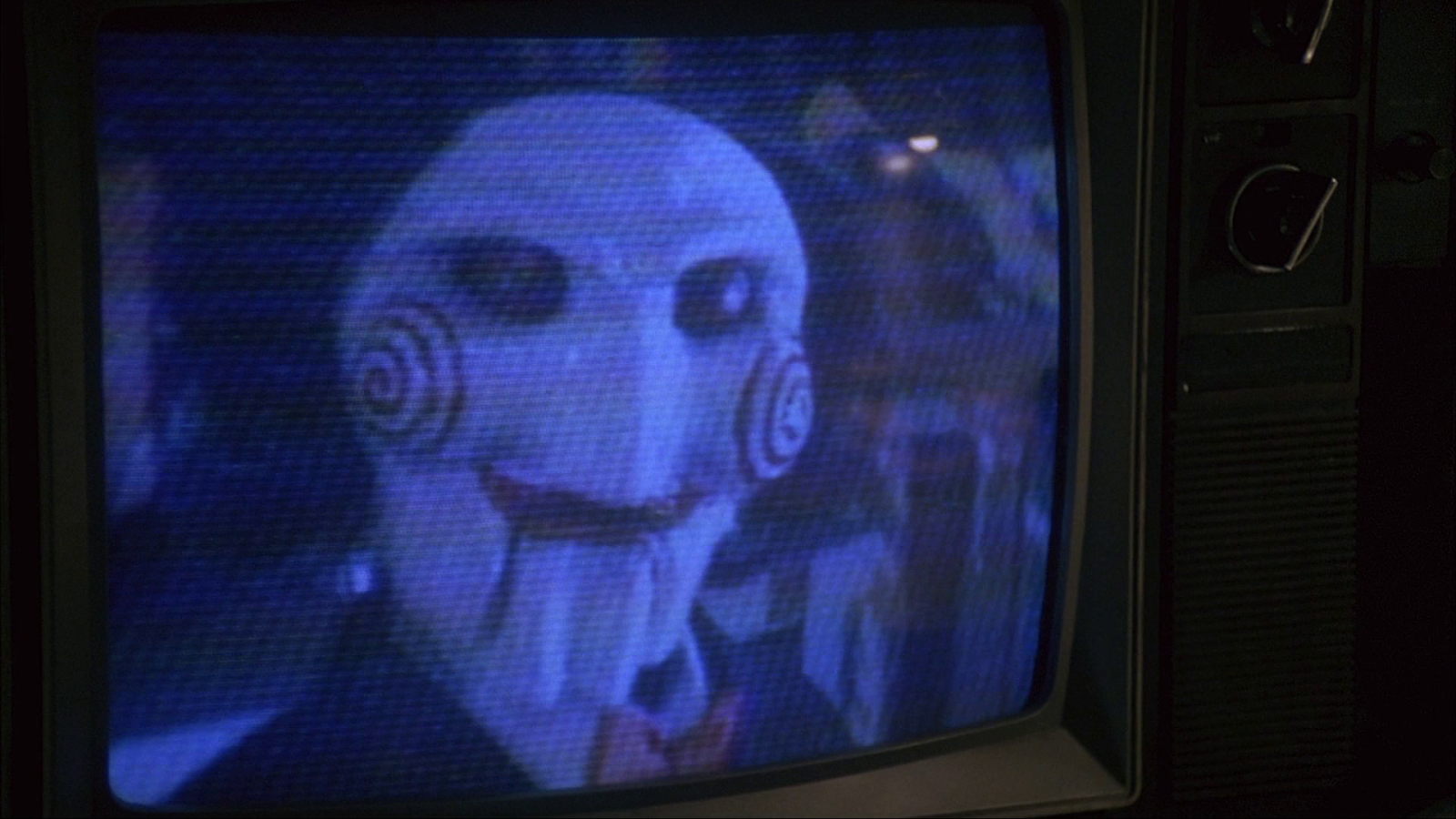 It's not like me changing my mind will actually alter the quality of these films, but nevertheless this is what my TV screen will look like for the foreseeable future and - who knows - maybe some surprises are in store.

As (flippin' A) pretty much everybody in the charted landmasses knows by now, the first Saw is actually really good and surprisingly un-gory, at least relative to its reputation. Except for the scene, the film plays more like a mystery thriller than an all access pass to Human Body: The Inside Story.

And on the relatively miniscule budget (about $1.2 million as compared to the sequels' mammoth budgets ranging between $4 million and a heart-stopping - for horror at least - $17 million), it would have been difficult for the green filmmakers to push it any further than they already had, especially with some of the well-known talent they had signed onto the project.

It all starts with a bathroom. Dr. Lawrence Gordon (Cary Elwes) and Adam (Leigh Whannell, the film's writer) wake up in a dingy tiled space, chained to pipes on opposite sides of the room with a corpse lying between them leaking enough blood to feed a low-income family of vampires for a week. 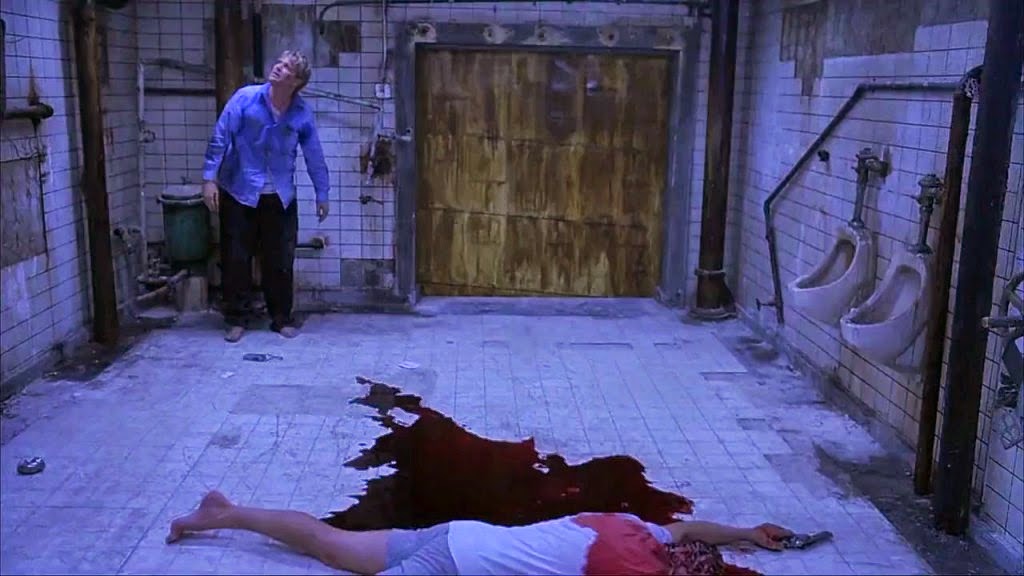 Like Cube before it and Nine Dead (among dozens of other clones) after it, Saw's plot hinges on victims with hidden pasts trying desperately to find connections, discover why they're here and who put them there, as well as hide the dirty truths that inevitably play important roles in their predicaments. It's a plot style that has received an enormous workout in the decade following 2004, but Saw's inventive visual style and intricate plotting (to a point) absolutely hold up in a big way.

It turns out that the two men were brought here by the notorious Jigsaw killer (Tobin Bell), a deranged madman who puts his victims - all people he feels are either immoral or not appreciating their lives enough - in elaborate traps forcing them to either go through terrible mutilation and learn a new respect for life or die in a terribly gruesome manner.

If you're one of the two people (it used to be three before this week) who hasn't seen this movie, I'll let the flashbacks throughout the film clue you in on why these two particular men are here (Of course there's copious flashbacks. This film couldn't survive as a one room drama, the flaws in the writing and dialogue would shine too strongly if they weren't diluted across different places and times.). 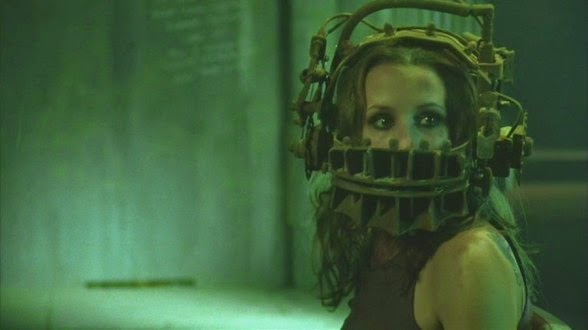 Although many one-room dramas could be improved with the implementation of a reverse bear trap,

Now it's not perfect. Saw definitely has its fair share of flaws, as tends to happen with lower budget indie films. Or, you know, anything made by humans. Some of the props are a little cheap-looking, especially the chains that bind our heroes. The locations tend to be a little spare, although their dinginess is tied into the tone of the film so it's not necessarily damaging to the film.

What is damaging, and the reason Saw rings a little hollow at times, is the dialogue and the acting. Side character Detective Tapp (Danny Glover) gets a sense of the hamminess present and has fun chewing out lines like "We'll strike under the cover of darkness," but Cary Elwes gets swept away in the current of his arch dialogue and swiftly drowns.

When his accent isn't busy popping its head out like a timid groundhog, he's spitting out lines like one would spit out teeth - with a vague sense of nausea and a hint of pure terror, unable and unwilling to comprehend what's going on. And I'm not speaking about the character. That would actually be a great choice. I'm speaking of Elwes specifically. He seems faintly mystified by this whole "acting" business, perhaps unmoored by the absence of Robin Wright. 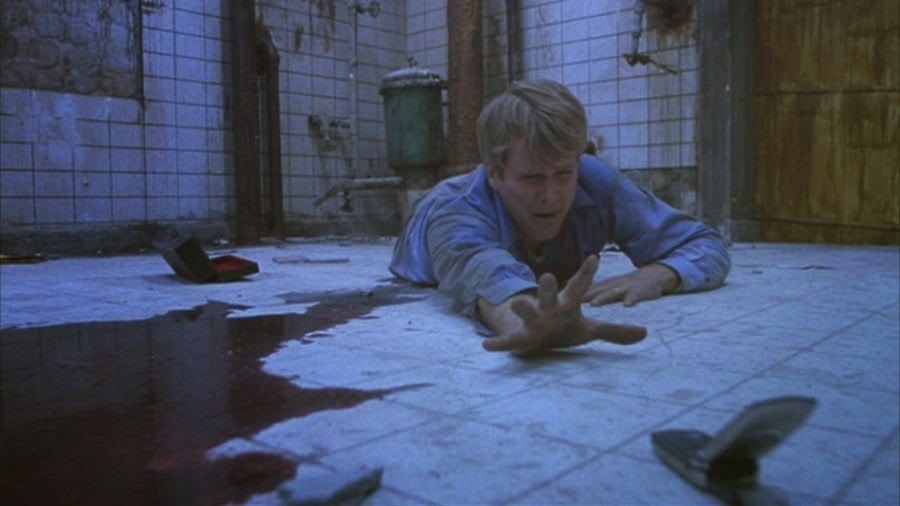 Well, at least he was trying.

Luckily, Saw has just as many things go right. The visual style is impeccable, especially considering that director James Wan wasn't the supernova presence he is today. With only one feature under his belt, 2000's Stygian, he still had a lot to prove.

The camera work, especially around Adam's youthful and unpredictable character (Dr. Gordon is shot with much more long, careful takes, mirroring his character) is vivid and brisk. Compounded with rapid-fire MTV style editing, it shakes you out of your seat with its dynamic electricity. Especially memorable is series of fast motion scenes in the middle of the film that detail Jigsaw's handiwork in other scenarios.

And though the dialogue is off, the plot itself is dense and engaging with every new piece of information clicking into the old. Perhaps one of the best indications of this style is that every single item in the bathroom proves useful to some degree or another, whether it be the obvious items like the corpse's handgun and cell phone, or the other artifacts discovered among the assorted rubble. It's rather like a game of Myst, a lot of the fun comes from discovering how all the disparate pieces fit together. (Like, say, pieces of a... Jigsaw. BOOM! Metaphor'd!)

Sure, a third act reveal is pretty dumb if you decide to pull at threads, but when you're in the moment everything is gold. And that puppet is hella creepy. 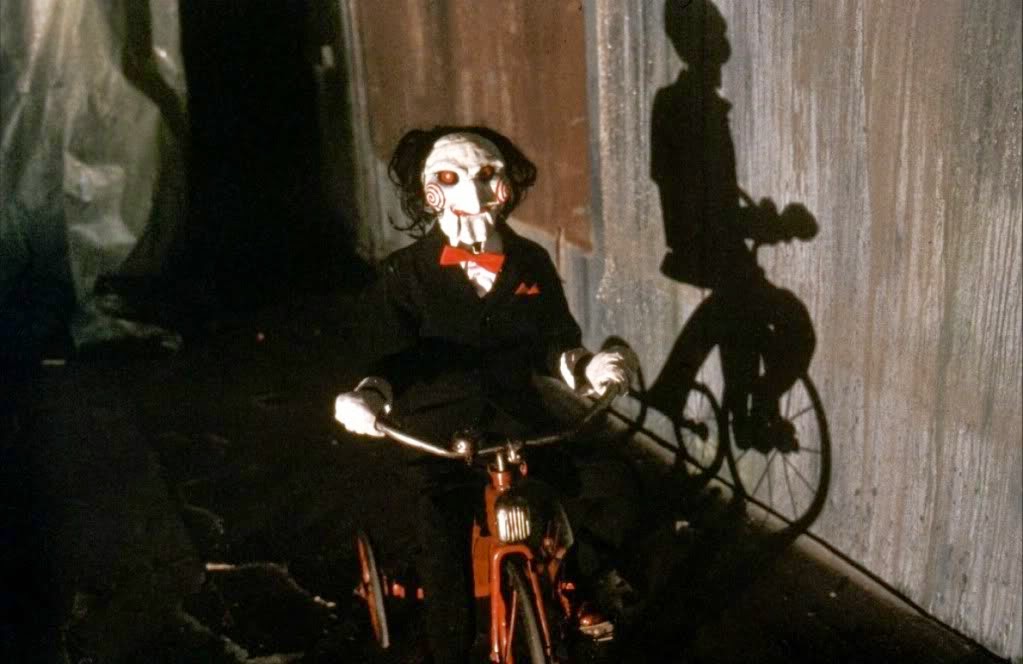 So that's that! My very first Saw movie. Hold the applause. All in all, I really enjoyed it and I'm glad to be proven wrong, at least by this installment in what was soon to be a booming franchise. Please don't be too mean to me for taking so darn-tootin' long to do it. I'm here now and that's all that matters. And now I have six more films to complete my education in one of the most important horror series of the past decade.

I hope you'll stick around longer than most of Jigsaw's victims tend to.