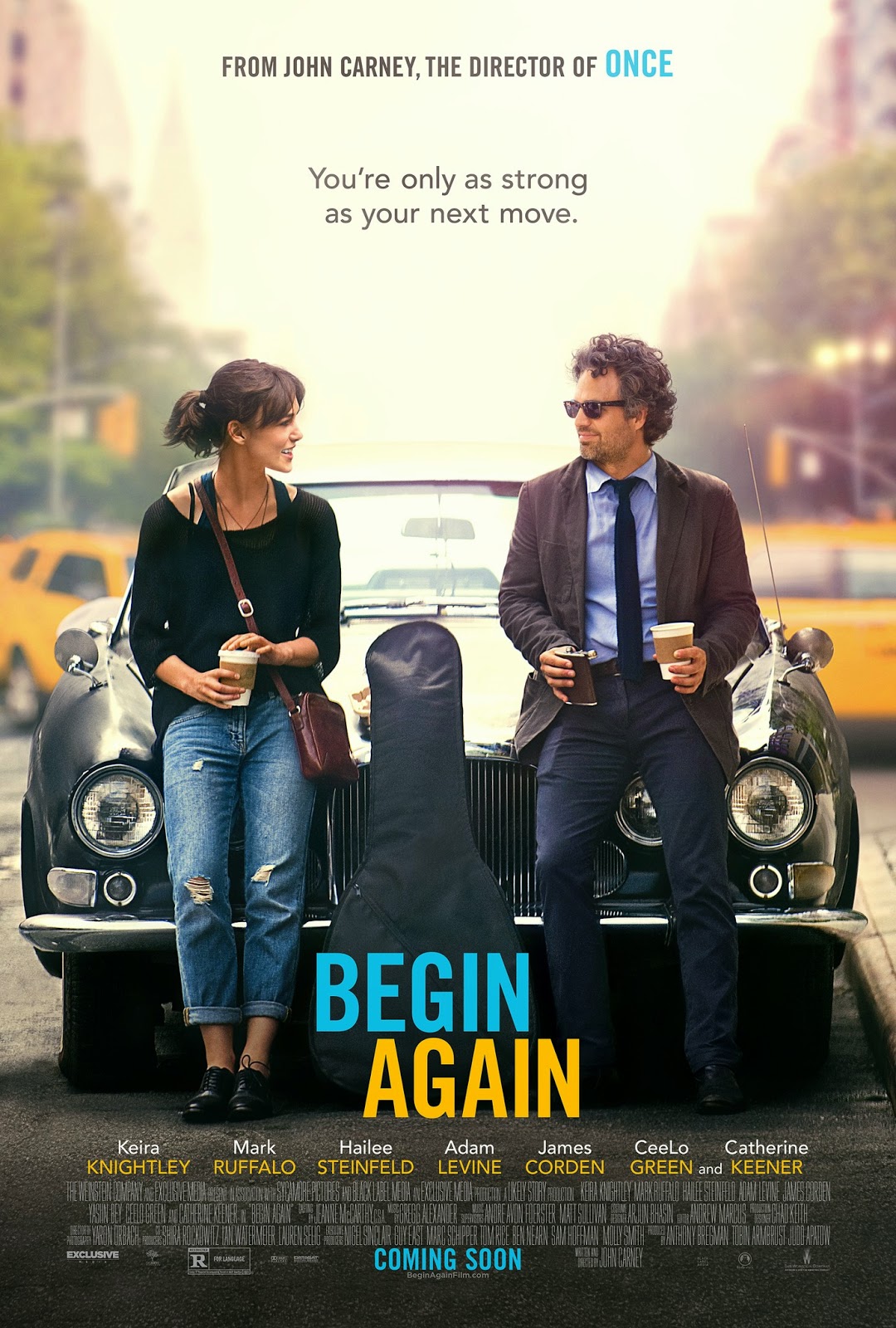 In 2006, the indie Irish production Once burst onto the scene, dazzling critics with its meandering not-quite-romance between two Dublin-based musicians. In 2014, that same director tried his hand at the indie rock sort of musical genre once more with the aptly named Begin Again. It's much less esoteric than Once, which will certainly enrage many fans, but places it more firmly in my wheelhouse.

As much good as Once does in reinvigorating the movie musical and telling a unique love story without all that pesky romance, it really does rely entirely upon people standing around playing music. It worked magic with the budget that was available to the filmmakers, but as a narrative it was severely lacking in many regards.

This new film is far from perfect, but it manages to translate Once into the modern age and marry it to a story that, while full of stock situations and characters, manages to feel lively and brisk rather than full of dead space. The songs aren't quite as revelatory and that might bring the energy down from time to time, but there's enough going on around the music that Begin Again doesn't bore. 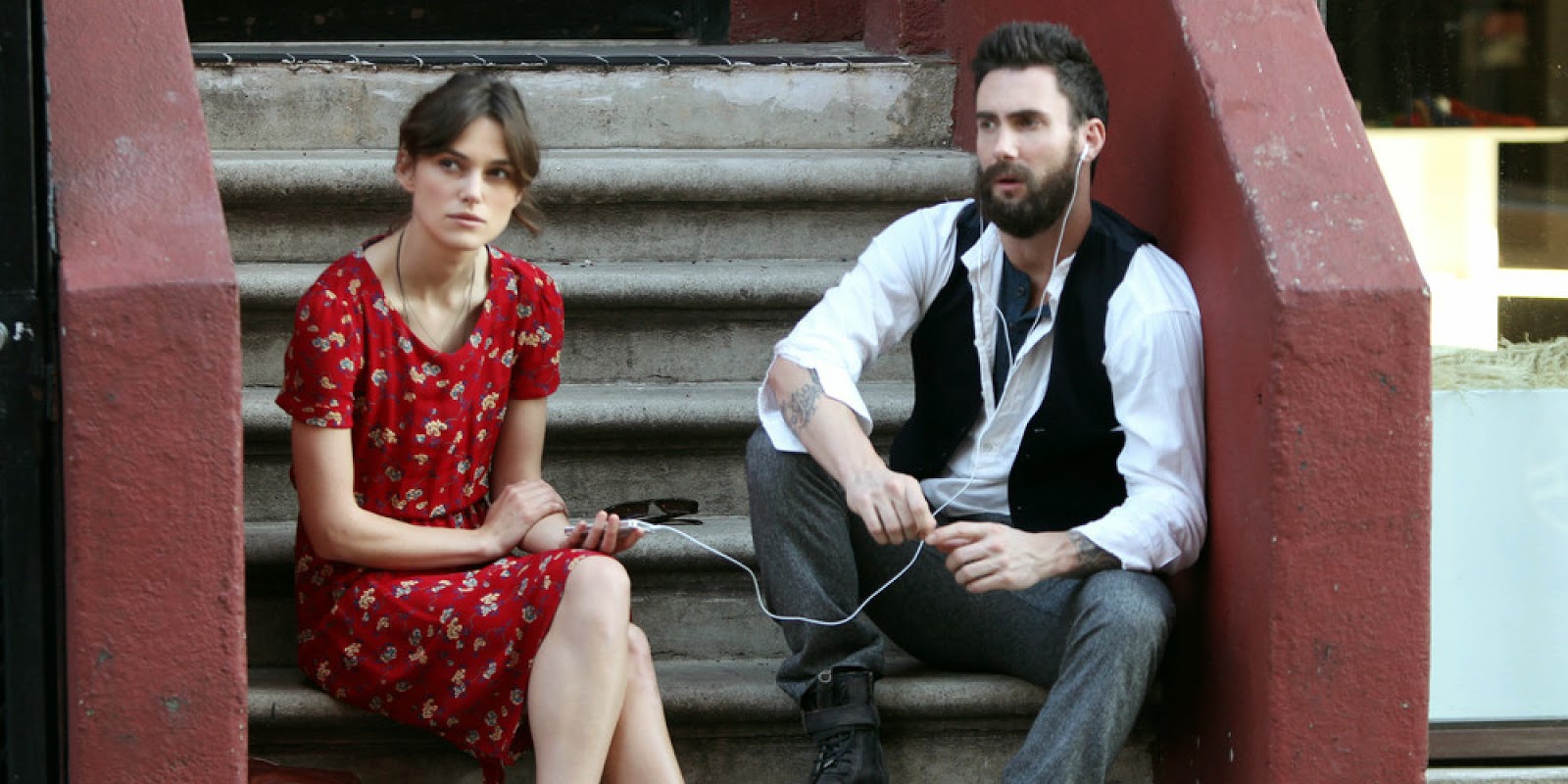 I could never be bored with a movie featuring both Adam Levine and beards.

So, how about this "plot" thing I've been hearing so much about? Gretta (Keira Knightley) is a young songwriter who recently broke up with her musician boyfriend Dave (Adam Levine) after he gets a record deal, some bigger britches, and a sexy mistress of his very own. Dan (Mark Ruffalo) is a down-on-his-luck record producer and Deadbeat Alcoholic Dad™ complete with an estranged wife (Catherine Keener) and daughter (Hailee Steinfeld) expansion pack.

It's a match made in movie heaven when the two meet at an open mic night at a local New York bar. Although Dan is on the outs at his company, he and Gretta set out to record an album live in places around the city and change the face of the music industry. You know, like they did in that one Glee episode where Santana and Mercedes sing in a dingy basement? Exactly like that.

Whatever, nobody's watching Glee. I'm not even  technically watching it. I merely ran afoul of a cursed karaoke machine a while back and am doomed to view it weekly until its finale. 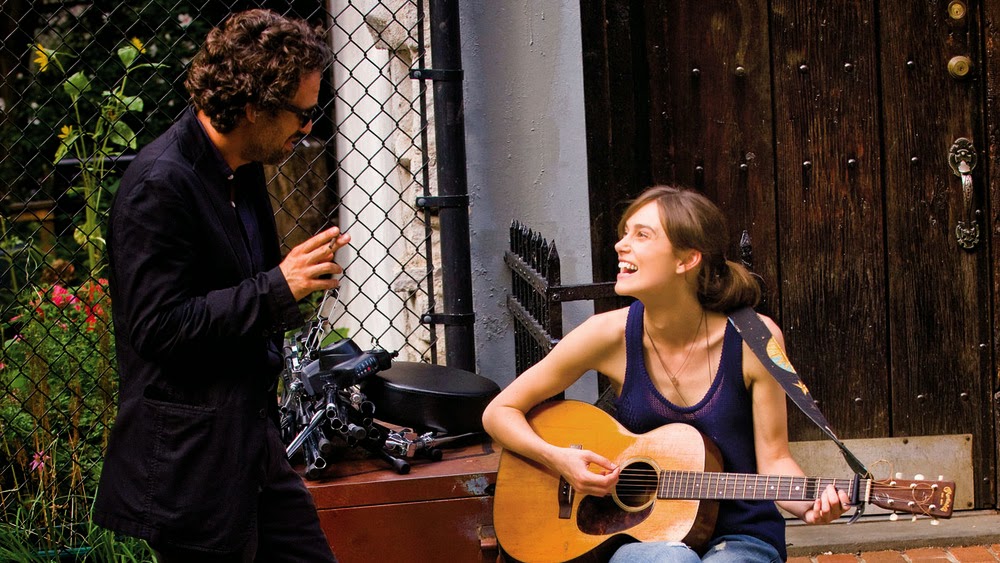 Ah, the bliss of the ignorant.

One of the most interesting things about Begin Again is how seamlessly it integrates modern technology (see: Apple) into the narrative. Rather than clumsily inlaying texts over the screen like The Fault in Our Stars or Non-Stop (thank you for the tip-off, Hunter), the film merely includes the use of technology as an organic way of interacting with other people in the modern world.

In one especially indicative scene, Gretta uses a handheld video on her iPhone to initiate a flashback sequence. The way she mugs to the camera with the phone itself is obviously crass product placement (although in the wake of Transformers: Age of Extinction, they could have decorated the entire apartment with iPads and still seemed like a subtle complement in comparison), but the narrative function it serves is a terrific step in the ongoing synthesis of narrative storytelling and modern communications.

And the visual style, while still considerably routine and average, is miles ahead of the freshman Once, especially in an early scene with an invisible orchestra. This scene does everything Smash did with sledgehammer blows and turns it on its ear with elegant beauty. This was the single most valuable point that got me on the movie's side in the early going. 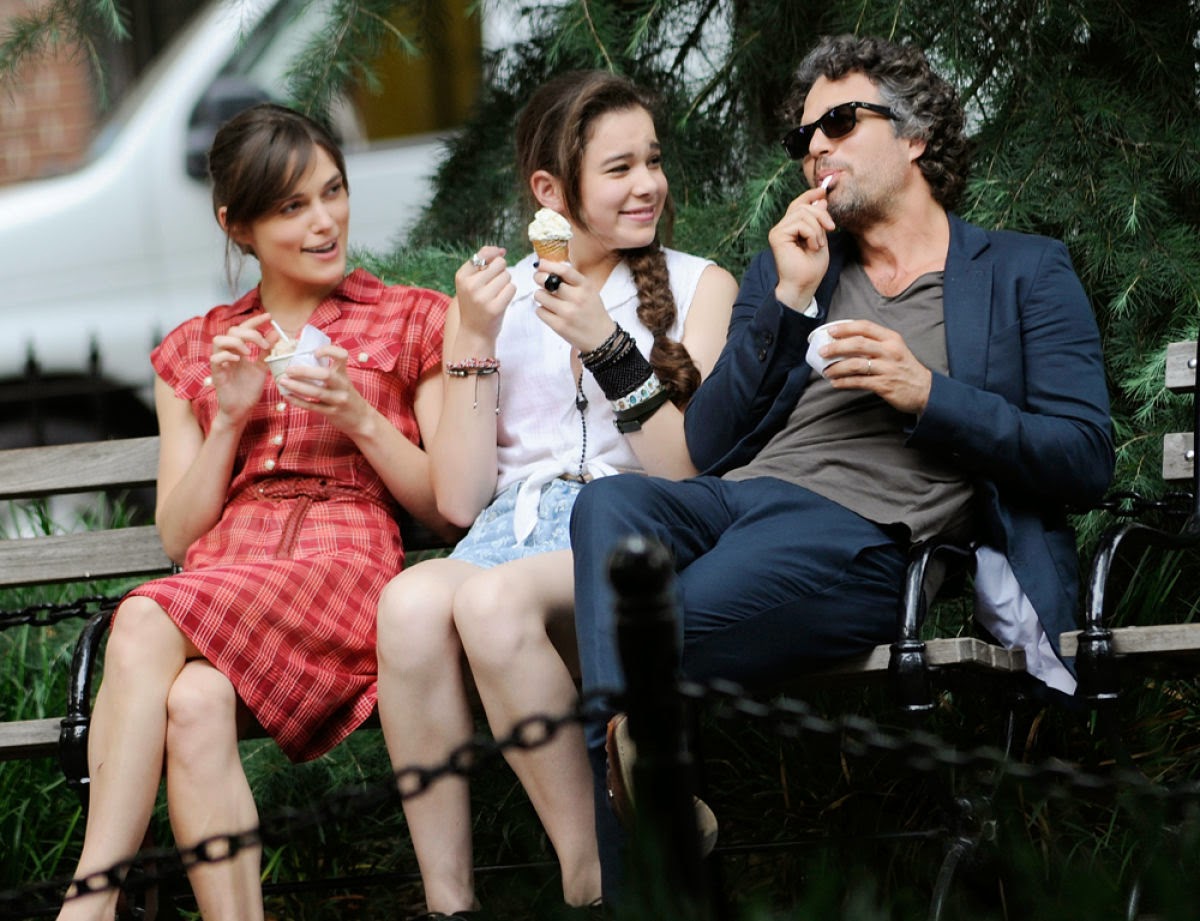 Now, Mark Ruffalo has been tearing it up in the notices lately thanks to The Normal Heart (thank you, Normal Heart), and he does fine here, but he's consistently outshined by Keira Knightley. Where Ruffalo merely does his Ruffalo thing (which is, on average, outstandingly higher than, say, the Keanu thing), Knightley is turning in her best performance in years, forging a quick chemistry with a wide array of actors like Ruffalo, silver screen newcomer Adam Levine, accomplished neophyte Hailee Steinfeld, and Cee Lo Green (All that's missing is Aguilera and we'd have a full-on The Voice reunion.)

Let's put a pin in that for a second because Cee Lo Green provides some of the most hilarious unintentional comedy I've seen this side of Troll 2. He's only in about one and a half scenes, but those appearances provide about one-third of the cuts in the movie. He's only ever onscreen for a consecutive three seconds or so before they cut to a different angle or something else entirely.

Now keep in mind that this is just conjecture, but the only possible explanation is that the man gave a performance so epically terrible that his lines had to be salvaged in small chunks haphazardly pasted together in order to seem like he accomplished anything even close to "acting." He is frequently overdubbed on other shots or has lines tossed in from the back of his head. In the scenes that show his face, he seems addled and unsure, which is compounded by the sheer mass of takes it must have required to get so much coverage.

Hats off to editor Andrew Marcus, who is on my short list for an Oscar nomination due to his Herculean efforts to composite this footage into something that resembles a "scene" without having to squint one's eyes. But enough about the poor promotional tie-in man. Knightley is transcendent (and she'd have to be to have chemistry with the anthropomorphic wood block that is Ceel Lo Green), and she's not a half bad singer to boot. 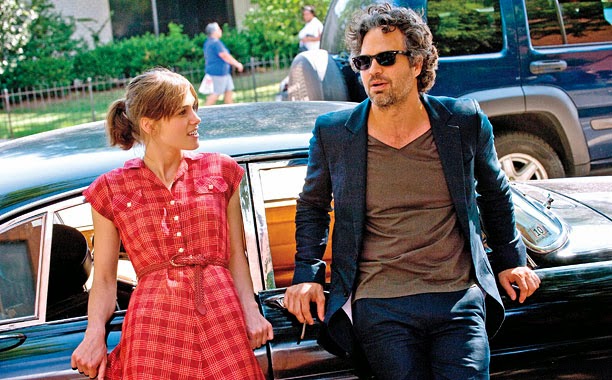 And an even better leaner.

Thanks to Knightley and Ruffalo's chemistry and Carney's able direction, Begin Again is a delightful indie musical film. It's not my genre, so I doubt I'll ever have the inclination to revisit it, but it's certainly worth a watch.

TL;DR: Begin Again is a decently solid effort bolstered by a terrific performance from Keira Knightley.
Rating: 8/10
Should I Spend Money On This? Well, I'd certainly have you spend it on this rather than Transformers, Tammy, or Echo.
Word Count: 1055
Also sprach Brennan at 12:26 PM