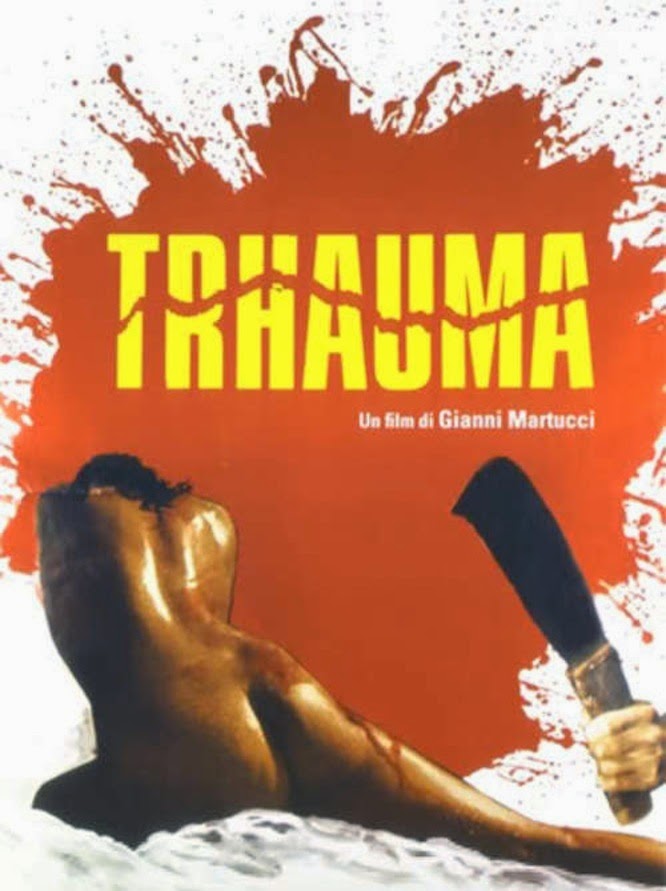 This is it, folks. The official final film of my first year of the decade-long Census Bloodbath project. Hopefully it won't take me a decade at the rate I'm going (although I have skipped back and forth reviewing films from other years so it's looking closer to one-sixth done rather than one-tenth done, thank goodness.)

With my mental block about the back quarter of 1980 finally lifted, it should be a breeze getting amped up to cover 1981, the only issue being actually acquiring said films. But don't worry, for I have a plan. An... absolutely legal plan.

You see, Trhauma is an Italian film. One that is so rare that, with my meager spending budget, it is not available with subtitles. Luckily it's barely over an hour long so at least I didn't have to sit through upwards of 120 minutes of a language I can only barely comprehend, but it's a tough hurdle to clear nevertheless. But, slasher films being slasher films, it's not like the script is particularly important. Especially in a country with such a keen eye for horror visuals, it was a treat to be forced to focus on the way the film is telling the story rather than the ins and outs of the story itself. 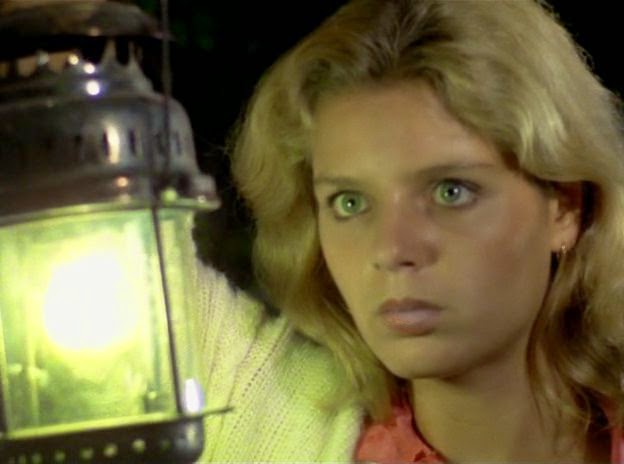 This is one of the only screenshots I could find without boobs. ...Visuals!

It's going to be an interesting puzzle getting through some of the normal elements of a review, but stick with me here. I'm the one who had to watch this thing, not you.

So, apparently a group of slightly-too-old Italian friends has gathered at a secluded house in the forest, probably because it has a pool. One of them, Lilly (Domitilla Cavazza), has a tendency to make loud speeches in Italian when literally anything happens. A frequent recipient of her pontifications is her poisonously douchey boyfriend Andrea (Gaetano Russo), who I would dearly like to hit with a hammer.

The house is probably owned by a rich man whose name I never caught. He is so cartoonishly, grotesquely overweight that it seems unlikely all these hot young thangs would want to pal around with him otherwise. I'm not being elitist here, it's just this is a group of people in which spontaneous nude photo shoots are seemingly commonplace.

Our model for the time being is Olga (Anna Maria Chiatante), who later happily tromps through the woods buck naked. Maybe it's just an Italian thing. Also in accompaniment are Carlo (Roberto Posse) and his wife, who has almost no scenes until an inexplicable lesbian blackmail sequence in the final 20 minutes. This is all pure gold.

All that's left is a killer and Trhauma's is a pretty good one, considering that he has zero backstory or motive or pertinence to the plot. Known only as The Being (Per Holgher), he is missing one eye and looks exactly like someone stretched Peter Dinklage, made him Italian, and kept him in a trash can for 90 days. 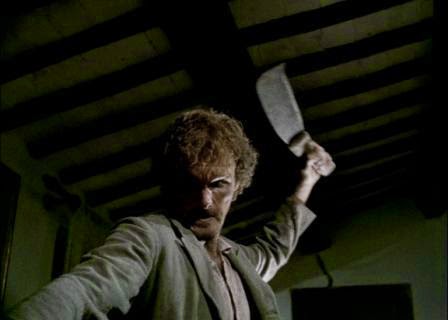 The story beats are unerringly familiar - The Killer pulls the branch back while girls swim, one of them dies early on after a sexy scene, Lilly is the only one who notices she's missing, she organizes a search party, the phone is dead. It's a classic cabin in the woods scenario, really. And it just goes to show that the Italians, what with all their tremendous success in the genre, were still capable of producing workaday cash-in slashers just like the rest of us.

The effects are generic (victims are smeared with blood so indiscriminately that the only conclusion I could come to was that they were "killed in the neck") and a hound attack is clearly just a man cuddling with a dog while growls are layered onto the soundtrack. And a good half of the shots have a small bit of fuzz stuck on the top of the camera frame. 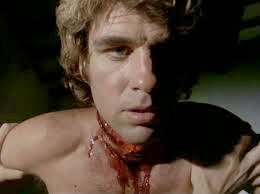 The finale is absolutely stultifying, sucking all the air out of an hour long film with female victims more wandering away from the killer instead of running. And The Being alternates between staggering around like a zombie or teleporting whenever he's offscreen. He's less consistent than a Ryan Murphy character.

But for all the folly of Trhauma, it still has some terrifically solid visuals to lean on. There's a lot of close-up focus on eyes, which certainly isn't accidental considering the killer's cyclopean infliction or the voyeuristic use of the camera. And for once a slasher director knows how to do something with blacks other than drown the frame in them.

Trhauma's shadows are immaculately composed, a quality it has over even my beloved Friday the 13th. And - oh my god, you guys, this is what I live for - one of the deaths is awe-strikingly Italian. A secretary is strangled to death.

Does that not sound mind-blowing? Let me add some layers.

1) The killer has to punch through a car window to get to her.
2) Her boss is feet away from her and can't hear her over the rattling of a lock he's trying to open.
3) She was smoking when it happened, so when she falls back to her seat, smoke trails out of her dead mouth.

Glorious. So, all in all, Trhauma was not an egregious waste of an hour of my life. I wouldn't jump at the chance to watch it again, but then again I wouldn't say no to a midnight screening with a rowdy crowd. ...And subtitles. Definitely subtitles. See you guys soon for my wrap-up of the entire year! I'm so excited!

Killer: The Being (Per Holgher)
Final Girl: Lilly (Domitilla Cavazza)
Best Kill: The Secretary is strangled while smoking and smoke rises from her corpse.
Sign of the Times: I can't really speak for the 80's in Italy, but in terms of the genre, this film depicts how far the mighty gialli of the 70's had descended. A slasher this ramshackle would never have been tolerated in Bava's heyday.
Scariest Moment: Andrea almost rapes Lilly in their bedroom.
Weirdest Moment: The killer is building a Lego house in his secret lair. 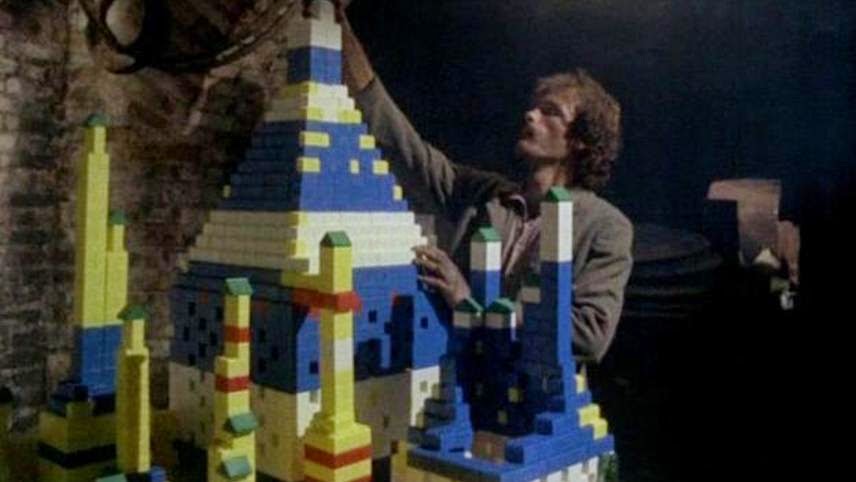 I'm trying to come up with a great Ed Sheeran joke here, but I can't. I guess I'm not in the class A team.

Champion Dialogue: "..."
Body Count: 8; including one that is implied immediately after the film's end but not including the dog.
TL;DR: Trhauma is better than its American counterparts, but that's not saying much.
Rating: 4/10
Word Count: 1309
Also sprach Brennan at 9:06 AM