Now that we’re firmly settled into our Amityville marathon, it’s time for that other October tradition: Popcorn Culture’s annual crossover with Hunter Allen at Kinemalogue! I’ve given him three more Census Bloodbath slashers to peruse, and in return I shall be covering another trio of 50’s sci-fi pictures for Cardboard Science! 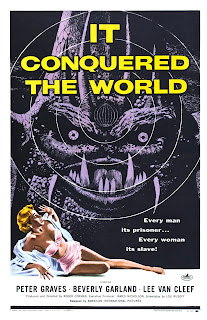 Can you believe we’ve been doing this project for four years now and I’ve never been assigned a Roger Corman movie until now? I’m trying to get into the Cardboard Science undergraduate program after all, and Corman is a pre-requisite. The man has worn many hats (including shepherding a host of Poe films for AIP, starting the careers of Jack Nicholson, James Cameron, and Francis Ford Coppola, and more recently producing a slew of SyFy Channel originals), but the man who can shoot a film in five days with a script written on a napkin has rightfully earned his status as an icon of 50’s B-movies.

I’ve only spent time with Corman-as-director in 1960, having seen two of his films from that year: Little Shop of Horrors and House of Usher. And if you’re surprised he had two films come out in the same year, you’re not paying attention. But I digress. Let’s get to the topic at hand, my very first 50’s Corman film and one of his four pictures released in 1956 (it must have been a slow year): It Conquered the World. 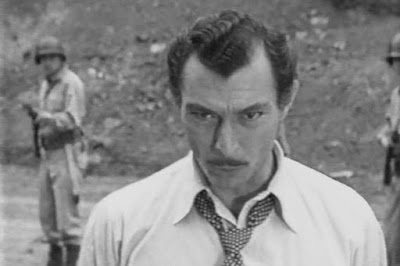 And no, that’s not a headline describing the box office of September 2017.

The It in question is an alien being from Venus, who is holed up in a hot spring cave in that exact stretch of rocky, deserty wilderness that lies just outside every small town in America, according to 50’s B-movies. It has been in communication with Dr. Tom Anderson (Lee Van Cleef, of every spaghetti Western you’ve ever heard of), a physicist who has become a laughingstock thanks to his theories about extraterrestrials spying on planet Earth. Unfortunately he turns out to be right when a team led by Dr. Paul Nelson (Peter Graves of Airplane! and probably some other stuff) launches a satellite into space, prompting It to pay earth a little visit.

While It uses its eight mind-controlling devices (attached to flapping plastic bats) to take over the town leaders by removing their emotion and humanity, Paul runs around trying to save the world and Tom attempts to help It carry out its dastardly plan, believing that It is helping to create a more sable, rational world in which he will be a high-ranking member. Meanwhile, Tom’s wife Claire (Beverly Garland) tries everything she can to talk him into resisting It’s evil influence. 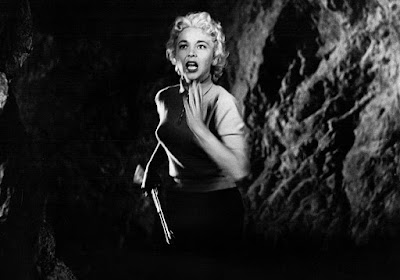 It Ruined Her Marriage

At first glance, It Conquered the World is very derivative of a lot of other sci-fi flicks. When It arrives, it causes all the machines in town to shut down, á là The Day the Earth Stood Still. And there’s no ignoring just how similar the Controlled humans are to Pod People (Invasion of the Body Snatchers did come out in the same year, but the five months between the two should have given Corman more than enough time to steal the idea, considering his typical production schedule. Although it might be the case that both films were ripping off Invaders from Mars). But what works works, and when Corman sets his mind to it, he can make an allegorical B-movie even better than the next guy.

The way I see it, It Conquered the World is another treatise against communism and conformity, only with an unexpectedly rich philosophical duality between the red-blooded American Paul and nebbish outcast Tom. The movie is extremely wordy, with scene after scene of the men and their wives carving their way through mountains of dialogue, but the ideas at the center - while naturally pretty simplistic and retrograde – are fleshed out in a way that’s both consistent throughout the film and actually pretty compelling.

Plus, it’s for the best that the movie is mostly dialogue, because when we do pay a visit to the monstrous Venusian, it’s… rough. It resembles nothing more than an ice cream cone with fangs, drizzled in chocolate, wearing a condom on its head. Also it has lobster claws for some reason. It’s a perfectly hilarious B-movie creature, which is one reason I signed up to watch these things, but it makes it harder to take that parts that I actually like very seriously. 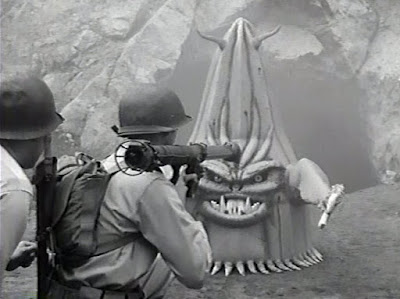 Not only is It Conquered the World reasonably smart, it’s also unusually dour for a film of its vintage. More cautionary tale than rah-rah jingoistic fantasy, it has no qualms about straight-up murdering major characters. It’s not like we haven’t seen people being shoveled into the mouths of monsters by the handful in films like Godzilla, Beginning of the End, or The Giant Claw, but there’s something about the deaths here that are particularly brutal and violent.

There’s no blood of course, but the deaths are perpetrated by other human beings rather than monsters. I dare you to watch through every 50’s sci-fi movie and find a single other scene where a woman is casually strangled to death or a man shoots his own wife point-blank. Hell, a portion of this movie’s microscopic effects budget was doled out to a plot-nonessential sequence of an airplane falling out of the sky and exploding! It’s very intent on grinding your face into the darker side of an alien invasion.

It Conquered the World feels like it’s breaking the rules of what these things are supposed to be, even as it’s trafficking in all the genre trappings, plot beats, and subtext that contemporary audiences had seen a million times before. Plus, although things end up pretty much exactly as expected, in the third act Beverly Garland takes up arm against the creature in a badass release of pent-up rage and feminist fury. Of course no 50’s movie was equipped to handle that type of scene well, but it’s one of the best, most exhilarating examples that I’ve yet seen. Forget film noir femme fatales, Beverly Garland is a proto-Linda Hamilton and I’m into. it.

In short, It Conquered the World is actually a pretty stellar piece, for what it is. It’s no minted classic like Invasion of the Body Snatchers, but it has a unique sensibility that propels it a very long way.