S Is For Silly

Today's Blogging From A to Z Challenge post returns to actual reviews. Sorry about yesterday and the day before, sometimes desperate times call for desperate measures. And things have been pretty hectic lately, but we're back on track now with the next installment of Freddy vs. Logic! And I'll have to make up for missing a day by posting both Saturday and Sunday this weekend, but it's fine because my Saturday commitments are significantly reduced for the rest of the month. After the dismal failure that was The Dream Child, New Line found it wise to cut their losses and declare the next Nightmare film to be their very last. Of course by now we have learned that in the horror world, the word "final" is about as trustworthy as one of those Nigerian prince emails. But it worked like a charm, capping off the main leg of the franchise right as the decade that nurtured it drew to a close.

And it's a good thing too, because Freddy's charm was quickly running out of steam. After the abomination that was Part 5, there wasn't much that could have made this film worse than that one, but Freddy's tragic descent from a menacing demon into a clownish buffoon couldn't have survived any further installments without the course correction of the masterpiece New Nightmare. 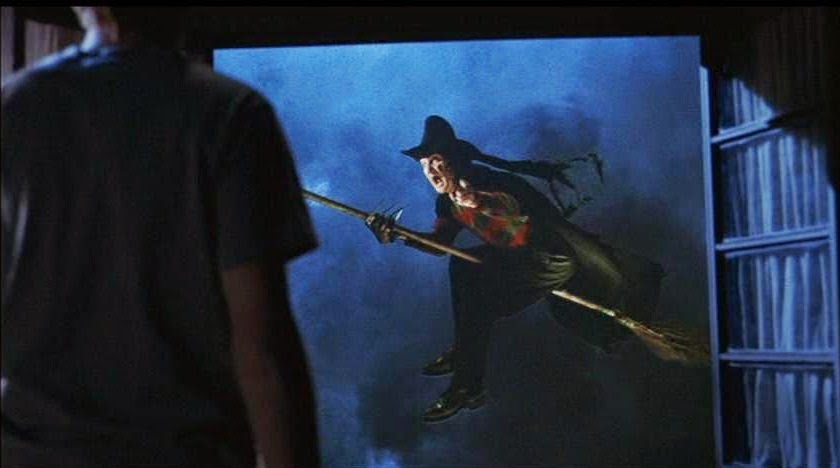 If you're in any way scared by this film, you probably were literally born yesterday. Congratulations on learning how to read so fast!

The film opens with my single favorite late period Krueger plot point - every single child in Springwood, Ohio is now dead, save one. He is forcibly ejected by Krueger and conveniently memory wiped so he can bring in some new prey for the demonic child killer, still played by the overwhelmingly generous Robert Englund.

So that's a riff on the idea explored in The Dream Master about Freddy's nominal revenge being over but his lust for innocent blood fuels new attempts to expand his victim pool. But let's step back for a minute. Although it's rather unbelievable that swathes of Springwood children have been dying in their sleep for five whole installments without the adults seeming to catch on, it's stretching it a bit to have us believe that every single child has expired in a ten year span without a backlash. And that information is given in the first frame, before the story has even technically begun!

It's a lot to swallow and it is an accurately absurd indication of where the franchise found itself at the back end of the 80's. But at least it doesn't have a Freddy fetus.

Anyway, so John Doe (Shon Greenblatt) finds himself at a halfway home in a nearby town carrying nothing but a Springwood newspaper clipping and the knowledge that, if he goes to sleep, he'll die. Unfortunately, the thing about characters that don't remember who they are is that they also apparently don't remember that they have personalities. And the "center for troubled teens" gimmick has been tried before in the infinitely superior Dream Warriors and even the surprisingly OK Friday the 13th: A New Beginning, so the screenwriters don't feel the need to spend a lot of time there, not that we want to anyway. 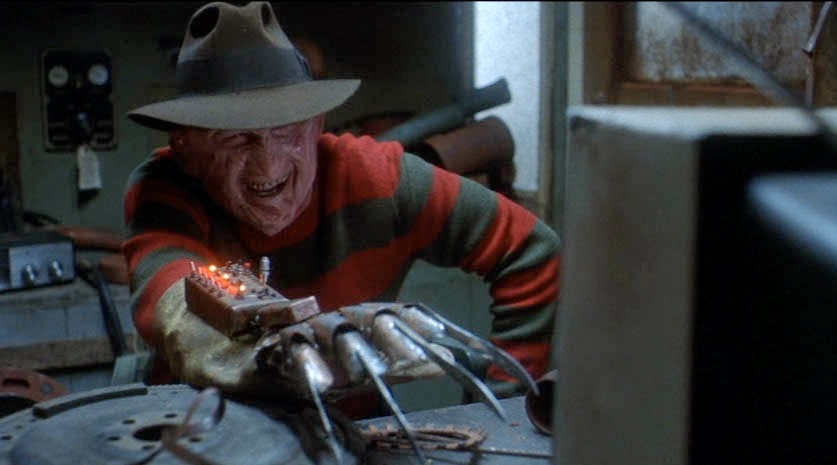 Not when there's so much tomfoolery afoot.

Another thing we don't spend a lot of time on is the supporting players, who are even more one-dimensional than the Dream Child cast, about whom I hyperbolized so much that I can't even adequately convey how much these new kids are even worse, lacking anything that even comes close to resembling real character traits. I never thought it could get any lower, and I have run out of words to describe them.

Anyway, here they are. There's Maggie Burroughs (Lisa Zane), a young doctor at the halfway home who has a recurring nightmare (that we really only see once) about a young girl with red ribbons in her hair and also there's a water tower which is absolutely not relevant but treated with all the importance of The Great Gatsby's green light; Tracy (Lezlie Deane, who had worked with Robert Englund twice previously, as co-star in Freddy's Nightmares and as director in 976-EVIL), a spunky and tough blonde; Carlos (Ricky Dean Logan), who has a hearing aid; and Spencer (Breckin Meyer) who is a pothead and is Breckin Meyer. Also Yaphet Kotto is there slumming it as Doc, the convenient exposition source and dream theorist.

But that's about all we get for Meat and three of those people see the end of the movie through living eyes. It's a real disappointment when your dumb slasher movie doesn't even have the heart to increase its victim pool, but again. No Freddy fetus. 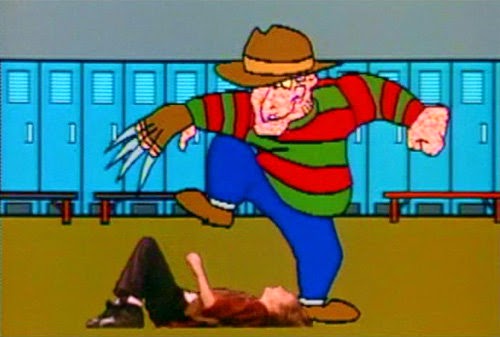 So these people end up in Springwood to solve the mystery of John Doe and the insane childless parents that populate the town, discovering in the process that Freddy Krueger had a child and if you can't figure out who that child is before the characters do, this might just be the first movie you ever watched. And for that, I'm very sorry.

Because it was intended to be the finale of the franchise, a lot of time is spent reflecting on the origins of the villain himself in order for us to truly understand him before his timely demise. This is unnecessary, reducing the fear factor even further with nonsensical anecdotes about magic dream demon worms, hamster murder, and Alice Cooper (the Alice Cooper part is pretty great). Much like Rob Zombie would in the 21st century, the screenwriter failed to understand that the less we know about the character, the more we are afraid of him. Also, this film is disproportionately focused on seeing Robert Englund out of makeup. Oh well, at least it's the last one.

They're free to be as stupid as they want! It's over!

If that sentence sounds ridiculous to you, it should. Unfortunately that appears to be their filmmaking philosophy because plot, screenwriting, and even basic visual issues abound in a careless miasma of insipidity. Characters endlessly exposit to themselves, John Doe mentions seeing a water tower in his dream despite nothing of the sort showing up onscreen and the characters wonder who rang the school bells in a town that, although it is quite ghostlike and creepy, is still obviously full of people.

And I'm not even going to mention the sublimely uncomfortable way that 3D technology is lodged into the back end of the film. 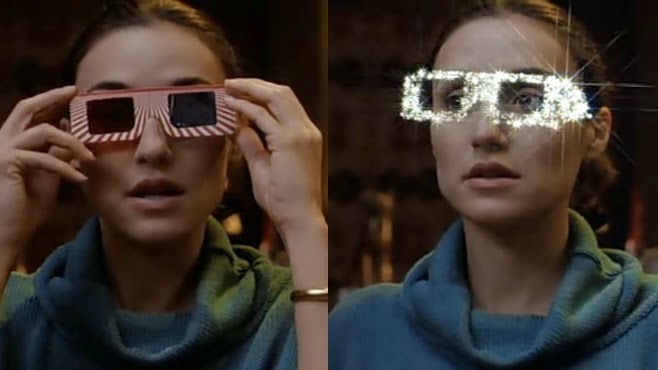 Not even the effects setpieces (which were by now the de facto reason for the franchise's existence) are up to snuff. Instead of the baroque and twisted nightmare imagery that even The Dream Child got right from time to time, we get a veritable gallery of matte paintings and a nice, full, even lighting that needlessly exposes the manifold flaws in Freddy's makeup this time around. Everything is terrible, but the fact that the filmmakers obviously stopped caring allows for some truly bizarre and entertaining sequences as the line between reality and fantasy breaks down for no particular reason.

So there's some merit in Freddy's Dead, but only as a vapid popcorn horror flick and not as a lasting work of artfully crafted horror cinema like several of its predecessors (and its immediate followup) would prove to be.

This was the first Nightmare on Elm Street released in the 90's and the first to be directed by a woman (Rachel Talalay, who would go on to direct... several episodes of Unfabulous) and it gets props for surviving this far out of the comforting embrace of the 80's and breaking the long-standing gender barrier for slasher directors, but that doesn't change the fact that it's a piece of crap. A lovable, charming piece of crap, but crap nonetheless. 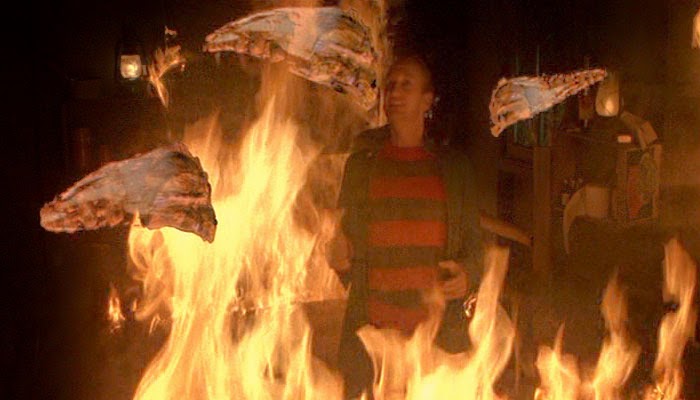 The film equivalent for "jumping the shark" might as well be "bringing in the worm demons."

The only obvious difference caused by a female director is the fact that two strong women survive this film, although the Nightmare franchise has always been a little more progressive and empowering than most thanks to the badassery of Heather Langenkamp and Lisa Wilcox. There's also a startlingly large amount of vicious and violent sexuality in the back half of the film that would have me believe that Talalay wanted to deepen the subtle horror of the earlier entries in the franchise. Wrong time wrong place, girlfriend, but at least you tried.

I admire that. I also admire the hilarious anti-drug sensibility of this film in which Spencer is constantly harangued for his drug use and D.A.R.E. stickers adorn every non-mobile surface. Only one year into the 90's and the slasher genre had been changed completely. This film is historically important for being the end of a major franchise and for more or less ushering the slasher film out of existence until the release of Scream in 1996, but those are dubious honors at best.

All of that is great if you open your heart, but I'd really rather be watching any of Parts 1 through 4 than this mildly enjoyable but still dumb as a doorknob film.