U Is For Ultimate Showdown

Today's Blogging From A to Z Challenge post is the second to last entry in the Nightmare marathon! We're almost to the end, you guys! Just the crappy remake is left and although I'll have to suffer through it, goodness knows how much I love tearing into bad movies. 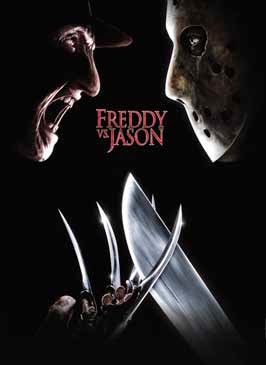 I gotta say, I don't hate spending time with Freddy, but it's nice to have some of my boy Jason back in my life.

For a very long time, Freddy vs. Jason was a pipe dream stuck in the seventh circle of development hell. During their heyday in the 80's, New Line owned the rights to the Nightmare franchise but the Friday-owning Paramount didn't seem keen on teaming up and the contract fell through. However, after the devastating flop of Friday the 13th Part VIII: Jason Takes Manhattan, Paramount sold the rights to New Line after which they promptly put a stake in its heart with Jason Goes to Hell: The Final Friday, sending it six feet under to join Freddy's Dead: The Final Nightmare.

With its two biggest cash cows out to pasture, New Line realized their mistake, but the film continued to fail to come together. In the interim, Wes Craven's New Nightmare and Jason X were released, effectively throwing a wrench into franchise continuity, but it's not like anybody ever cared about that before so whatever. After another decade of struggle, Freddy vs. Jason finally saw the light of day in 2003, making it the first Nightmare film in nine years and the first Friday film in two (although the gap between Jason X and the film before it was seven long gratuitous nudity-less years).

After all that work, it's a little surprising that the resulting product is pretty crappy, although it probably shouldn't be. 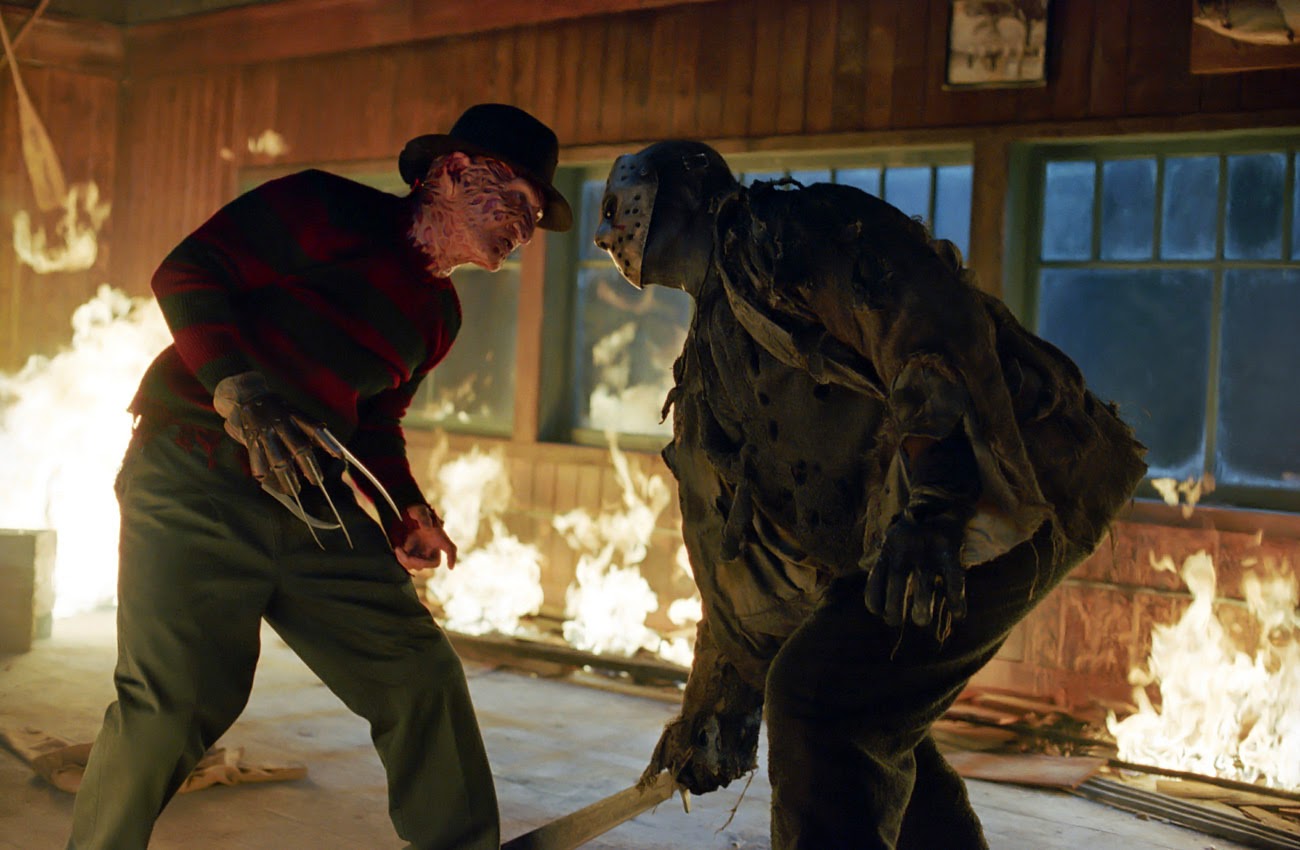 It REALLY shouldn't be.

The movie opens fairly reverently, with a sequence about Freddy (the eternal Robert Englund in his final performance as the character he made into an icon) lamenting being forgotten by the citizens of Springwood, thus sapping him of his powers. Already this flies in the face of Freddy's Dead, but the more people pretend that film doesn't exist, the better the world will be.

In order to strike fear into the hearts of Springwood teens he revives Jason (Ken Kirzinger, who is certainly not as memorable as the four-time Jason and fan favorite Kane Hodder he replaced, but whose intimidating height still makes for a good slasher villain) from the dead and sends him to 1428 Elm Street to work his magic.

Or, what passes for Elm Street, anyway. Due to budget concerns, Freddy vs. Jason was shot in Canada so the original house was unusable. The substitute house is something akin to replacing Daniel Radcliffe with Tommy Wiseau as Harry Potter and hoping nobody would notice. The film sheepishly hides its architecture behind shrubs and in the corners of shots.

The alarmingly Freddy-centric script reveals that even behind the scenes, people were picking favorites, but once Jason goes rogue and begins slicing and dicing before Freddy can even snag a daydream here and there, the two powerful forces turn against each other in an ultimate showdown, battling on each other's home turfs (the dream world and Camp Crystal Lake), swapping weapons at one point, and generally providing a lot of the fan service that was missing from the first half of the film.

And plenty of that red, red krovvy.

Director Ronny Yu hails from the world of Hong Kong action cinema, so it makes sense why the final battle would be so kinetic and dynamic but the rest of the film lackluster. Unfortunately, it is important to remember that these are both horror franchises and, no matter how anemic they may have gotten through the years, it's important to at least try to be scary, something this film fails to accomplish at any reasonable level.

The gore is great when it's around and I love myself some bucket-sized blood splashes, but the nightmare sequences and sets are far too slick and polished and (dare I say) early 2000's to really pack a whallop. The grubby and tactile worlds of the low budget 80's films were a huge part of the appeal of both these franchises and Freddy vs. Jason buffs it all out into a uniform sheen. 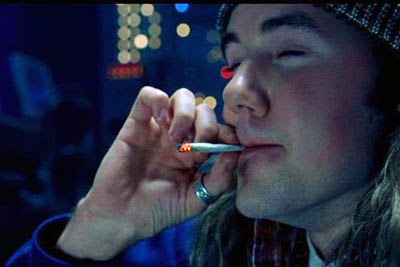 Only because Jay and Silent Bob weren't available.

Our resident Final Girl is Lori Campbell (Monica Keena from Undeclared, one of my favorite short-lived sitcoms), a girl who is haunted by the death of her mother and the disappearance of her boyfriend Will (Jason Ritter), both mysteries that begin to be solved once she uncovers the Freddy Krueger secret, something the town has been trying to keep under wraps.

Now look. I love characters named for slasher references as much as the next guy (in fact, considerably more than the next guy), but when it's this intrusive and her name is said so frequently, it just gets annoying, especially considering that Monica Keena is nowhere near Jamie Lee Curtis in terms of talent, charisma, or looks. In fact, she is so inconsequential an actress, there are no screenshots of her readily available despite the fact that she is nominally the star of the film. At least on the human side of things.

Although she's not the worst actress in the film, the entire cast could win the blue ribbon in a Leaden Line Delivery Competition. Even the evergreen Robert Englund finally seems to have gotten tired of saying the word "bitch" all the time. It doesn't help that his makeup has been needlessly milleniumified and is just too glossy to be threatening. 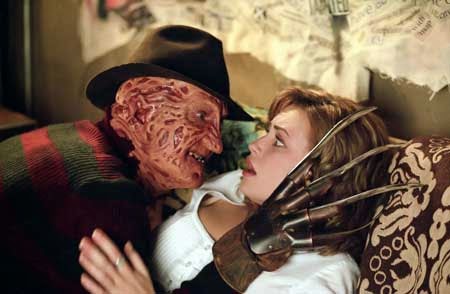 It's like watching a Bratz doll make razor puns.

All in all the film is amusing, but it's not a particularly memorable entry in either franchise. With some work (and maybe a directing credit by one Mr. Brennan Klein), an absolutely perfect film could be made out of this premise, but as it stands, it is an only OK vehicle for two kingpins of pop culture. It's harmless, but it didn't do justice to their grand legacies.

Killer: Freddy Krueger (Robert Englund) & Jason Voorhees (Ken Kirzinger)
Final Girl: Lori Campbell (Monica Keena)
Best Kill: Trey is ruthlessly machete punched as he lies face down on a bed which is then folded backwards. A fitting comeuppance for the single worst character in the film.

Sign of the Times: Kelly Rowland is in this film and inexplicably doesn't die.
Scariest Moment: Jason has a field day at a cornfield rave, slicing through the crowd with his beloved machete. Side note: This is perhaps the only Nightmare film to actually show corn in the Ohio town of Springwood.
Weirdest Moment: Freddy becomes a terribly rendered bong-smoking caterpillar. 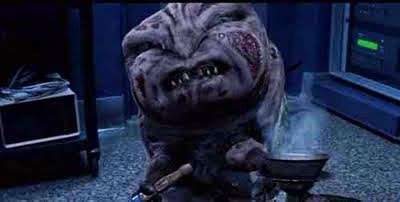 Champion Dialogue: "Dude, that goalie was pissed about something."
Body Count: Jason - 18; 19 if you count Freddy, which I do   Freddy - 1; dude's gotta step up