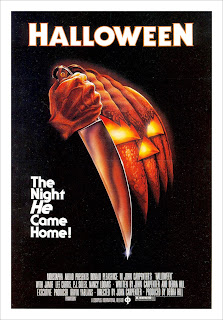 Well folks, the first of October has struck once more, so you know what that means. While you are busying yourselves with warm-ups for the pumpkin spice flavor gauntlet your taste buds are about to endure for the duration of the autumnal season, my wicked little elves have been hard at work putting together a delectable collection of Halloween treats for you all. In addition to our yearly crossover with the Great Pumpkin himself, Hunter Allen of Kinemalogue, and a whole host of Scream 101 Podcast goodies, we are also heralding the beginning of our second annual franchise marathon, in which I take this scariest of months to pore over a horror series that has been unduly neglected by Yours Truly.

This month’s topic was an easy choice: Halloween. We’ve only dropped in on our old pal Michael Myers just once with my Halloween II review in May, and he’s the only slasher villain of the Unholy Trinity to not have a complete archive of reviews here on Popcorn Culture. Over the course of this increasingly blustery month, we will see to it that that glaring oversight is rectified.

We will travel to the rotten mires of druid cults, the mystifying enigmas of Stonehenge, the cutting prose of Kevin Williamson, the classical lyricism of Busta Rhymes, and the redneck rampage of Rob Zombie. But before any of that can happen, we must take ourselves back to one very special night in 1978, a crisp fall evening rife with enchantment and wicked possibilities… 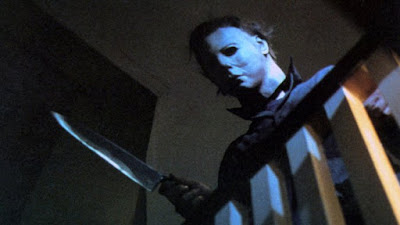 The night HE came home.

When Michael Myers (Nick Castle behind the mask, Tony Moran in front) – a lunatic who killed his sister on Halloween night when he was only six years old – escapes the insane asylum, he heads back to his hometown of Haddonfield, Illinois (played here by Pasadena, California under a not entirely convincing blanket of imported fall leaves). [SPOILERS] By random happenstance, the first person he sees is Laurie Strode (Jamie Lee Curtis in her first feature role), whom he latches onto with a sharklike intensity. After stalking her round town for the remainder of the day, he holes up in the house across the street from where she is babysitting, killing her friends Annie (Nancy Kyes) and Lynda (P. J. Soles) in the process of his single-minded, totally arbitrary pursuit.

All the while, Michael is pursued by the well intentioned but monologue prone Dr. Loomis (Donald Pleasance), who teams up with the put-upon Sheriff Brackett (Charles Cyphers) in an attempt to apprehend his marauding patient. The sheriff doesn’t necessarily believe the doctor’s story and quickly grows tired of his habit of endlessly soliloquizing about Michael’s pure eeeeevilness like he’s Hamlet’s Tumblr page, but he agrees to the stake-out, at least for the night. 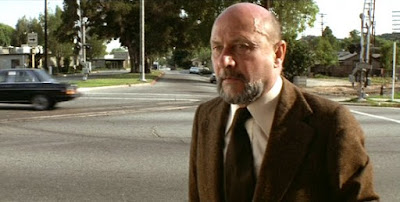 The night HE sat around rambling for 80 minutes before actually making himself useful.

Halloween is not a slasher movie. It is THE slasher movie. Psycho may have turned on the gas and Texas Chain Saw may have lit the pilot light, but the rolling boil that was the slasher genre could not have existed without the roaring flame of John Carpenter, Michael Myers, and Halloween (in this extended metaphor, Friday the 13th is a kid throwing his spaghetti-o’s at the wall to see if they stick).

Halloween, however unintentionally, cemented in the rules of the slasher film: the silent masked killer, sex = death, the virginal survivor… And while there may be a handful of slasher films that I personally prefer to Halloween, not a single one of them handles those particular elements better. You see, Halloween is a fable. A shadow-drenched, pot smoke-infused fable, yes, but a fable nonetheless. It tells a brutally simple tale of Good vs. Evil played out in a distressingly innocuous canvas: American suburbia.

The characters might be thin enough to be extras in Oliver Twist, but Halloween isn’t a character study. It’s a broad strokes narrative about good (Laurie Strode) triumphing over evil (Michael Myers) and learning pure evil can never be truly stopped, only stalled for a time. This story is told within a pulse-pounding, Euro-inspired edifice of unparalleled structural quality, showing audiences a terror that could reasonably strike in their own neighborhoods.

And scaring the bajeezus out of so many people, the face of modern cinema would literally never be the same.

As a work of cinema, Halloween is a triumph, especially considering that they barely had enough money to start a fire. John Carpenter utilizes every creative tool at his disposal with the assured skill and confidence of a much older man (which, of course, he now is – and pretty much all he cares about is X-Box and basketball, so maybe he has a Benjamin Button thing going on). We’ve already discussed a bit about how the script is such an intelligent and efficient engine of terror, but there’s a lot more that goes into scaring people than a good story. There’s a reason we aren’t talking about The Outing in similarly hushed, reverent tones.

One thing the film couldn’t live without is the cinematography, courtesy of Dean Cundey (of every film you like). There’s remote beauty in the iconic, unbroken tracking shot that opens the film and puts you in the indelible perspective of a young killer, the fantastically skilled color grading (on certain prints) that paints a fantasy Midwest town in vivid oranges and blues, or the shadow-drenched Steadicam that stalks and frightens just as much as Michael Myers himself. Even after decades of filmmakers aping his techniques, Cundey’s work here remains fresh and untarnished.

The other key figure in Halloween’s success is John Carpenter’s minimalist synth score, about which I have already written a fairly lengthy essay. However, in a nutshell, the self-penned score of this film changed the game. Instead of lush (and expensive) orchestration, necessity drove Carpenter to this devilishly uncomplicated music, which drives the film forward with unrelenting determination, switching between several repeated motifs to alter the tone of scenes on a dime. It’s elemental and incongruously huge, painting the basic, primal evil of Michael Myers with a distressingly parsimonious, unflagging melody.

Putting this music on your iPod shuffle will turn any drive into a daring adventure.

Unfortunately, Halloween’s methodical approach to terror has left a lot of modern horror fans (weaned on the Saw franchise and the like) in the dark as to its staying power. However, it’s not a big leap to get into the mindset of audiences of the time, as it is to watch something like Dracula or The Cabinet of Dr. Caligari. It merely requires a willingness to turn on your brain and engage, because Halloween has a lot to offer even the most Twitterfied millennial horror fan. Here, terror builds like steam pressure in a kettle, though there are also a decent smattering of hard jolts for the impatient.

And what would a Halloween review be without mentioning Jamie Lee Curtis? I could lose my credentials if I skipped over this performance, which inaugurated the reign of the Scream Queen. Jamie Lee is deserved royalty not just because she was in an astonishing number of early 80’s horror flicks (though she indubitably was), but because she’s the best of the best. Laurie Strode is a broadly simple character, a challenge for any true actress, but Curtis brings her to vivid life, balancing vulnerability and inner strength in a girl next door who never ceases to be a believable, rational teenager.

And of course I could hardly dare to skip over Donald Pleasance’s contributions, though they are certainly of a different ilk. His performance as Dr. Loomis is far from the grim reality of Laurie Strode, a bravura effort that constantly brushes against the fabled Top without slipping over it. Without Pleasance enacting the miniscule modicum of restraint he applies to the role, the entire character and his florid but thematically essential dialogue would be naught but a searing black scar over a classic film. But as it stands, Loomis is a loud, brash, intense piece of the puzzle, but a tremendously fitting one just the same.

Halloween’s success changed the horror genre forever, but nothing coming down the pike could ever match its elemental terror and thoughtful balance of shaded violence and fablistic fervor. There would be great slasher to come, but none that would exist in this pure, unfettered, absolutely essential form.

Happy October, everyone. Get ready for a wild ride.