If Ever A Wiz There Was 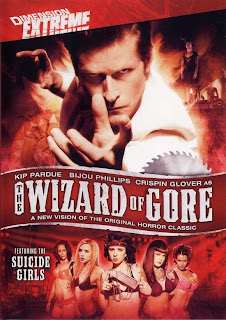 If ever a 70's horror film deserved a remake, Herschell Gordon Lewis' The Wizard of Gore was it. A barely there story that merely served as a serving board for mass quantities of blood and guts, the repetitive original film was ripe for a re-imagining, even if it was only to punch up the quality of the gore with modern effects.

This 2007 Crispin Glover vehicle went above and beyond, serving up a halfway to film noir steampunk neo-hipster dark fantasy world in which the plot mechanics are actually given more screentime than the gore effects.

This absolutely works, and puts Wizard of Gore on the map as one of the best (and earliest) horror remakes I've ever seen. Now keep in mind we're grading these on a curve, so it's not The Exorcist or anything, but it's really pretty darn good. Much better than it has any any right to be. 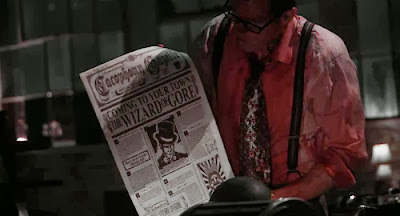 Also it has about ten times the amount of suspenders, which is a plus in my book.

The opening shot (a man dressed as a 1920's newspaper man is arranging letters in an old fashioned printing press, dripping blood into the ink from his drenched outfit) establishes the tone of the film, which is something I never thought I'd be saying about a modern horror flick, but there you go. It's a loving throwback to the Olden Days but don't think for a second they're gonna be afraid to taint the waters with a nihilistic modern twist.

The art design is really tremendous here, establishing spaces and characters that are immensely tactile, grubby, and coarse yet completely surreal - rooms and people that almost certainly don't exist in the real world but you don't doubt for one second that they could.

Our protagonist for the evening is Edmund Bigelow (Kip Pardue), a young man with a penchant for wearing period clothing who was raised by a trust fund. He has devoted himself body and soul to the publication of his underground newspaper, and if that's not enough to clue you in on a certain subculture he belongs to, take a look around at his rabbit ear TV and his rotary phone.

When he takes his girlfriend Maggie (Bijou Phillips) to some sort of rave/mandatory sex party hybrid, they witness a magic performance unlike any other. Montag the Magnificent (Crispin Glover, who is... Crispin Glover for crying out loud!) seeks to strike fear into the hearts of the nihilistic and unempathetic youth culture he sees before him. He stages gory spectacles in an attempt to get them to feel something... anything.

Gender equality finds a voice in Maggie, who vehemently denounces the magician's patter, much to the consternation of her boyfriend, who drinks it in like a fine summer wine. 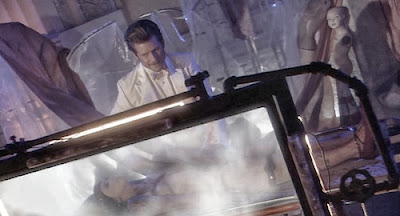 Interlude: It's nice to know that Crispin Glover's hair can still do the thing.

Ed has become unduly fascinated with Montag's exploits and drags Maggie back the next night. But not before he has a bizarre nightmare about last night's volunteer being mutilated while she gives him a lap dance.

(Boobs are a major theme in this movie, as you can probably tell. It's not quite as justified by Maggie's denouncements of misogyny as the film seems to think, but it at least feels like part of the atmosphere of the subculture its trying to depict than tawdry pandering.)

As Ed becomes more and more engrossed in the illusions, his violent nightmares get stronger and stronger (giving us one of the movie's scariest sequences) and when the girls start turning up dead under highly suspicious circumstances, he begins to investigate, interrogating the local drug dealer (Brad Dourif - aka the voice of Chucky from Child's Play) and Montag's assistant (Jeffrey Combs, none other than Herbert West, Re-Animator), a savage looking man with a predilection for biting the heads off rats.

The bodies keep piling up as his nightmares and realities collide and his carefully curated life begins to tear at the seams, fueled by dark fantasies, the resurgence of half faded memories, and rumors of the mind control drug tetrodotoxin changing hands.

As he gets closer and closer to unraveling the mystery of Montag's illusions, he finds himself in danger of completely unraveling mentally as well. 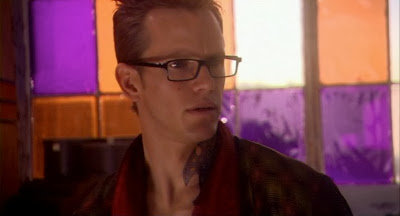 As evidenced by his neck tattoo.

As the film draws to a close, the entire construct of Ed's life comes flying apart and crashing down around him as he becomes more and more convinced that he's committing these murders himself under the influence of tetrodotoxin.

Is he killing these girls?

Is he who he thinks he is?

Is Maggie who he thinks she is?

Does he feel... anything?

The Wizard of Gore is everything people imagined Inception to be: a mind-bending, surreal exploration of the line between dream and reality that never seeks to definitively resolve what is real or imagined. Now WoG didn't have a Christopher Nolan master plan behind it, so it's not quite as good as all that, but gee whillikers, this is a dark and twisted ride. 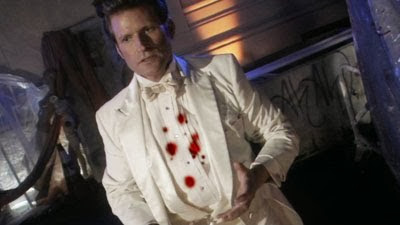 Unfortunately set in a world without Tide To Go pens.

Director Jeremy Kasten (whose entire pedigree seems to be Behind the Scenes documentaries) brings a great deal of atmosphere and fevered intensity to what by all means should have been just a gorified retread of ancient Grand Guignol style material.

Crispin Glover walks a tightrope between Vincent Pricey hamming and dapper menace with an over the top, precisely calculated performance that it's a real shame many people never got the chance to see. The other actors, most of them alumni from the Hostel franchise, do their best but Glover steals the show, even blowing original Montag Ray Sager out of the water.

Although the high amount of practical effects (as opposed to CGI, which still doesn't seem to have worked out how to properly render blood) were enough to win me over any day of the week, The Wizard of Gore won me over with tight control of tone and atmosphere, suitably mind-bending but not altogether implausible twists, and a sense of glee at getting to play with a classic story.

This Wizard is a step above its predecessor, a noteworthy accomplishment in a decade that also saw Rob Zombie's Halloween. I'm just so proud. This is what remake culture is about. Creativity. I mean that unironically. To successfully tell the same story while making it something completely new and twisted while maintaining tonal similarities is no small accomplishment.

It's nothing less than magic.