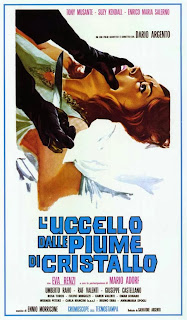 For the first time, I'm participating in a blog event that I've been following avidly for some time now, Kevin Olson's Italian Horror Blogathon, a yearly Halloween event around the movie blogging community. Basically, in the seven days before Halloween, any blogger who wants to can watch an Italian horror film (or as many as they like), write up a post, and submit the link to the Blogathon. It's an excellent way to discover new blogs and see what other people have to say!

I'm a big fan of Italian horror with its "Colorful violence first, plot later" mentality and the influence it holds over a lot of my favorite American slasher films (A Nightmare on Elm Street particularly). And while I have yet to plumb the depths of what I have heard is an indefatigable joy for gory zombie pictures, I have spent quite some time with the giallo films, the precursors to my beloved slashers. In fact, I've reviewed several of them here. Since I started this blog in June, I've reviewed Joe D'Amato's Video Nasty Anthropophagus, Mario Bava's seminal work Twitch of the Death Nerve, and even included Dario Argento's masterpiece Suspiria in my list of the five scariest films I've ever seen.

Considering the influence the genre has had on me (those are three of my favorite horror movies), I decided to expand my knowledge, beginning with Italian horror maven Dario Argento's debut film L'uccello dalle piume di cristallo or The Bird with the Crystal Plumage.

Before it begins with me.

That screengrab alone is enough to make any fan of the gialli squeal with pleasure. The black-gloved killer was a staple of the genre, even more than hockey masks or chainsaws are today. And here is the shot where Argento begins his long and illustrious career - an array of knives laid out on a blood red cloth. Fitting, don't you think?

The plot of The Bird with the Crystal Plumage is simple (and admirably comprehensible, considering the frequent nonsensical excesses of the genre). American writer and Patrick Dempsey doppelgänger Sam Dalmas (Tony Musante) is vacationing in Rome with his girlfriend Julia (Suzy Kendall) when he witnesses a crime in an art gallery. A woman and a black gloved man grapple with a knife atop a staircase, but the shadowy man vanishes through a side door before Sam gets a chance to see his face.

Sam is trapped between two glass partitions, unable to escape and unable to help the woman, who he later learns is the gallery owner's wife Monica Ranieri (Eva Renzi), who is writhing in pain on the floor of the gallery.

Monica survives, but Inspector Morosini (Enrico Maria Salerno) suspects that her attempted murder is one of a string of mysterious killings that have been taking place over the last month. As the key witness, Sam's passport is confiscated, forcing him and Julia to cancel their trip back to America. They decide to help out in the investigation because apparently there's nothing else to do in freaking Rome.

As the investigation is underway, more and more beautiful women turn up murdered and Sam and Julia receive threatening phone calls from the deranged killer. Pretty standard Italian horror goings on.

But let's back up a minute. At the gallery, Sam is between two barriers - immobile, helpless, forced to watch and ponder the imminent death of a young woman. Does that seem familiar, moviegoing audience? Perhaps that's too intimate a reading of the film, but remember this is Argento we're talking about.

Regardless, this is a unique and creative way to stage a horror sequence, and while it is maybe not as inspired as Argento's later works, it and many other sequences are clearly little seedlings of who this man was going to be. Besides, it's dreadfully unfair to compare any horror film to Suspiria, even one Argento made himself.

The visual style is strong in this one, but for every stylized sexual killing (and even for an Italian slasher film, the deaths are very sexual in nature - one takes place on a bed as the woman grabs handfuls of sheets while screaming - an idea that starts to make sense once you finish the film in its entirety), there is a policeman setting up a lineup and shouting "Bring in the perverts!" For every freeze frame flashback that mirrors the killer's habit of photographing his victims, there is a 70's supercomputer with so many spinning wheels it looks like the local laundromat or a painter who proclaims his genius after drawing a circle.

In short, although visually appealing, The Bird with the Crystal Plumage suffers from being a little cheesy, even taking the time period into consideration. This problem would be resolved as the director got practice and discovered his voice, but this film ain't as scary as some of the others that are just around the bend.

That doesn't mean it doesn't have a killer Final Girl sequence (which it does) and a dread filled atmosphere (which it does, despite occasional sputters). Just, with its stabs at atmospheric musical score that would later be perfected by frequent Argento collaborators, Goblin, and engaging but drab setups, it can't help but feel like a stepping stone. A very important and well composed one, but a stepping stone nonetheless.

Although this staircase shot is worth proclaiming to the Heavens.

TL;DR: The Bird with the Crystal Plumage is a cerebral and well crafted slasher thriller, but pales in comparison to Argento's later masterworks.
Rating: 6/10
Word Count: 968 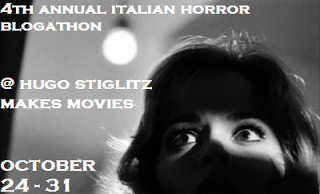 Also sprach Brennan at 7:38 AM