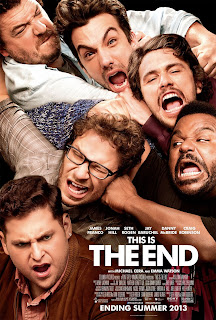 First, an apology for missing This Is the End when it was in theaters - due to reasons I've never been able to adequately comprehend, movie tickets cost money.

This is the first "End of the World" film from the relentlessly unwatchable and overwhelmingly nihilistic 2013 summer season and to my knowledge the only mainstream comedy (if not the only mainstream film in general) to deal with the Biblical Armageddon. Granted, it's Biblical Armageddon as experienced by a group of douchey comedy actors and viewed through a haze of pot smoke and dick jokes, but it's an interesting fact nonetheless.

Also to my knowledge, this is the only film in which the entire cast is playing themselves (albeit slightly fictionalized versions). This idea could almost certainly not exist in any other era, what with the mainstream media's increasingly microscopic coverage of the minutiae of the celebrity lifestyle. Thanks to Reality TV and TMZ (don't get me started), stars are more accessible to us. They have characters outside of their onscreen personas and they seem like they could be our friends. They are our friends.

It's hard to imagine Clark Gable or Audrey Hepburn being willing to take on a project like this (even without the dicks), but in today's world we have the ability to see what Anna Kendrick is having for breakfast. We can see Kim Kardashian's Christmas presents. We can visually explore the subtle daily shifts in Justin Bieber's abdominal body fat percentage. Why not make a movie like this?

Essentially, This Is the End is the apotheosis of meta. The period of postmodern cinematic recursion that didn't start with but reached highest visibility with the release of Scream, a film that thoroughly explored the concept that its characters were well aware that they were characters in a movie has reached its pinnacle. We've seen characters who know they're characters but what about characters that simply aren't characters at all?

Such a brilliantly weird high concept would almost certainly have ended up in a back drawer somewhere had it not been for the high profile cast attached to the project (and their willingness to take massive pay cuts).

OK, so enough with the film theory BS. What about the actual movie?

The Bling Ring has gone way too far this time.

This Is the End is certainly funny, but it's funny like a California winter - mild and enjoyable, but you can't shake the feeling that it really should be something else.

The plot follows Jay Baruchel (Jay Baruchel, one of many Judd Apatow alums in the cast, having starred in Undeclared in 2001) on his first trip back to LA in some time. He's staying with his buddy Seth Rogen (Seth Rogen, who also co-wrote and co-directed) who suggests they hit up a party at James Franco(James Franco)'s new house in the Hollywood Hills despite Jay actively despising the whole scene and everyone there.

The party scene (one of the funniest scenes in the film) is a veritable avalanche of guest stars including Mindy Kaling, Paul Rudd, Jason Segel, a coked out Michael Cera, and scores of other good natured celebrities who gave up a weekend to help out with their friends' movie. It's really quite charming that none of the guests seem to be plugging themselves in any way, just appearing for the sake of how funny it is to see them die violently.

And boy do they. Immediately following the Rapture, a massive sinkhole opens up out front, swallowing fistfuls of celebrity partiers into the bowels of Hell. Michael Cera is impaled by a broken streetlight. Paul Rudd accidentally squishes a woman's head. It's really quite hilarious in a low fi CGI kind of way, although it seems more like a silly celebrity home video than an actual wide release motion picture (something which is true of essentially the entire movie).

Stars are nonchalantly chucked left and right without so much as a backwards glance. The only one who's actively mourned is Rihanna, a pop star whose preponderance of close-ups suggest that the filmmakers' passion for her rivals even Sergio's, a concept that is scientifically impossible. 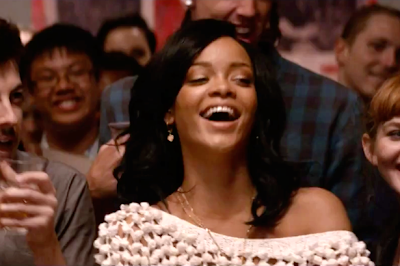 As calculated by Einstein's Theory of Rihannativity.

The only survivors of the world's biggest party foul (besides a bedraggled Emma Watson who makes an extended cameo) are Jay, Seth, James, Craig Robinson (Craig Robinson), Jonah Hill (Jonah Hill), and Danny McBride (Danny McBride). And I hope I speak for more people than just me when I say who the hell is Danny McBride?

Against Jay's wishes, the six of them hole up in James Franco's palatial home to try and survive the siege of flames and sinkholes and poorly composited CGI monsters (the atrocious CGI is mostly forgivable here because the film in no way asks us to actually take the demonic threats seriously). The motley crew goes through the motions arguing over rations, forming alliances, and desperately trying to survive. Oh, also dancing to Gangnam Style (an already dated touch) and filming homemade sequels to Pineapple Express.

They also film reality TV-style confessionals that I choose to believe is part of the overarching parody of the Hollywood elite because they serve no actual purpose.

The movie sags greatly in this middle half, but picks up again once our heroes are forced to exit the house after a truly hilarious exorcism scene, the best in the entire film. The final act of the movie is inconsequential but much less infuriating and thus a considerable success. 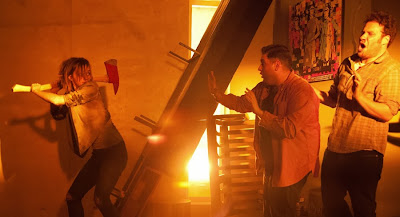 Also Emma Watson is the best.

For the most part, the actors are solid, the standout being Jonah Hill as a hilariously sycophantic toady and the worst being Danny McBride as all of the worst qualities of humanity rolled into one doughy ball.

And despite the infrequent truly hilarious scenes and the thankfully not overwhelmingly intolerable bad ones, there is a heart buried deep in there, the core story arc being Seth and Jay struggling to repair their  fizzling friendship. It's no Old Yeller, but it's more heartfelt than most of any of these actors' entire output put together.

Overall, This Is the End is breezy entertainment that deserves more laughs than cringes, especially considering the fact that it's essentially a silly celebrity YouTube video with a $30 million budget.

Yes, that comes with its flaws, but such an idiosyncratic project should be embraced in today's cinematic climate. I mean a movie that contains a lengthy reference to The Exorcist and a fully choreographed Backstreet Boys performance within half an hour of each other is to be cherished. And though it isn't the crown jewel of comedy, such an eccentric little film is welcome in an age of bland blockbuster flops and endlessly manipulated, committee-mandated sequels. This Is the End is a fluke; a strange and mostly accidental byproduct of a waning studio system, but a charming one nonetheless.

TL;DR: This Is the End isn't exactly funny enough to earn its dizzyingly high concept, but it's a quirky and fun meta film.
Rating: 6/10
Word Count: 1296
Also sprach Brennan at 9:16 AM