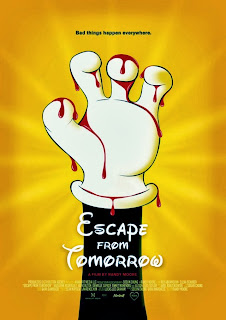 Because it's uncouth to tell personal anecdotes on official review sites: Sergio and I got a chance to see a sneak peek of this movie at the Cinefamily Theater with the cast and crew for free because I have connections.

Namely, being on an email list. (Shhh, don't tell anyone.)

It was a really exciting experience, especially considering that we almost didn't get in at all. 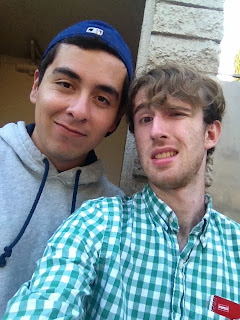 See the notepad in my pocket? That's how official I am, yo. 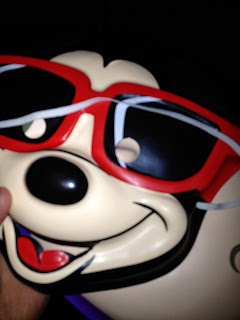 Also we got free Mickey and Buzz Lightyear masks, which make everything worth it. 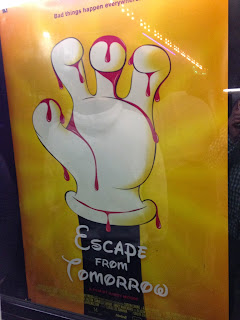 For those of you not in the know, Escape From Tomorrow  is a psychological horror film that was shot guerrilla style at Disneyland. For over 45 days, the cast and crew snuck around Disneyland and Walt Disney World (each of them were given a year-long park-hopping Disney pass which must have accounted for about half the budget), shooting on a handheld camera and keeping their scripts on their iPhones so as to avoid detection by the Disney police.
You see, Disney is a ruthless corporation that rules over exhibition of its trademark images with an iron fist. If caught (and they very nearly were on several occasions), the consequences could have been dire, ranging from being shut out of the parks permanently and thus being unable to complete the film (or ride Splash Mountain ever again) to being sent to jail. Shots has to be extensively choreographed using sun charts to most effectively utilize natural light. Out of fear of being found out, director Randy Moore even took the measure of editing his film in South Korea, far from the watchful eye of The Mickey Mouse Chain Gang.
The film premiered at Sundance and reviewers and doubts were raised that the film would ever receive a release, limited or otherwise. At this moment in time, Escape From Tomorrow is slated for a simultaneous  limited release and Video On Demand release on October 11. Disney wisely has decided to avoid taking legal action at this time, hoping not to inadvertently drum up publicity for the film.
The film opens on Jim (Roy Abramsohn) on a Grand Floridian balcony (one of the film’s few manufactured setpieces) receiving news that he has been let go from his job. Determined to nevertheless make the most of his final day of vacation, he drags his nagging wife (Elena Schuber) and two kids (Katelynn Rodriguez and Jack Dalton) around Walt Disney World, only to be haunted by disturbing visions (like glaring evil eyes sprouting from the “It’s A Small World” dolls). A pair of young Parisiennes (Danielle Safady and Annet Mahendru) capture his imagination and his increasing obsession with them is mirrored by his decreasing attachment to his family and the candy-colored World around him.
While the first act of the film is largely aimless, it charms with nostalgic trips to the classic rides that have defined American youth for decades (a personal joy of mine was deciphering which sequences were shot at Walt Disney World and which were shot at Disneyland – a geography I am intimately familiar with, having grown up in Anaheim). There is some simmering family drama at work here, but the joy is found in little moments (little by necessity, due to the nature of the filming) of snappy wit and infrequent but gleefully weird effects sequences.
The mostly pleasant but meandering first two thirds of Escape From Tomorrow spends its time spewing up intriguing symbols and subplots like a bad flu outbreak, a mysterious and hypnotic evil witch, and eerie premonitions. This all promises to tie up if not totally neatly, at least in an enjoyable and unstrenuous manner but then all hell breaks loose.

The plot points that have until now been gliding along smoothly begin to smash into each other, piling up in a devastating fiery wreck as a panoply of grandiose setpieces and ambitiously inscrutable symbols come crashing down on the relative peace of what was an otherwise totally workable narrative. Not one single loose end gets any sort of closure and the film resolutely refuses to end, sprinting along and leaking psychotropic absurdities for a good fifteen minutes past the natural endpoint.
But man, what a method of filmmaking. It might be just a gimmick, but here in the Happiest Place on Earth the gimmick is everything. Filmed in crisp black and white to accentuate the nostalgic aspects of the exploration of Disneyana, the film is buoyed half on fond memories of the theme parks and half on slack-jawed utterances of “How did they do that?”
Because there certainly isn’t much more to it than that. The acting is wooden across the board (pun absolutely intended) and the film suffers unduly from a lead actor who is content to mug at the camera in feeble attempts to approximate human emotion. The only standouts are Alison Lees-Taylor who chews the scenery as an evil witch and, of all people, young Katelynn Rodriguez, an actress who hasn’t even made it to double digits yet who outshines every single adult member of the cast.
It’s a shame such detailed work went into making what turns out to be a rather scattershot mess, because it very clearly means something important to Randy Moore. Unfortunately his immense passion for complex themes and symbols far outweighs his ability to communicate them. Attentive viewers can maybe glean some subtextual analysis of the artificiality of the Disney Empire, but that would be giving too much credit to a man whose ambition knows no bounds and is not bound by the laws of narrative clarity.
There’s a terrific movie in there somewhere, but it would take a much less green filmmaker to dig it out of the muck. Nevertheless, Escape From Tomorrow is an undeniably fun film to watch. Whether you’re there just to stick it to Disney or to see some top notch cinematic tomfoolery, this film should be your October go to. If that doesn’t sound like your cup of tea, take the money you would have spent on the movie and buy yourself one tenth of a Disneyland ticket instead.
TL;DR: It's a miracle that Escape From Tomorrow Exists at all, but coherence is sacrificed to radical methodology.
Rating: 5/10
Should I Spend Money On This? It's definitely worth seeing for film buffs or bad movie lovers. The guerrilla style is fascinating and the brain-melting twists reek of camp.
Word Count: 1100
Also sprach Brennan at 7:56 AM