Because I'm a generous sort and I love to spoil you, included among the October festivities is a crossover feature with my friend Hunter over at Kinemalogue. He will be taking on three Census Bloodbath titles while I face three artifacts from one of his regular features - Cardboard Science, which explores science fiction B-movies from the 1950's. If the following film is any indication, I was rather nicer to him in the films that I assigned than he deigned to be with me. Wish me luck. 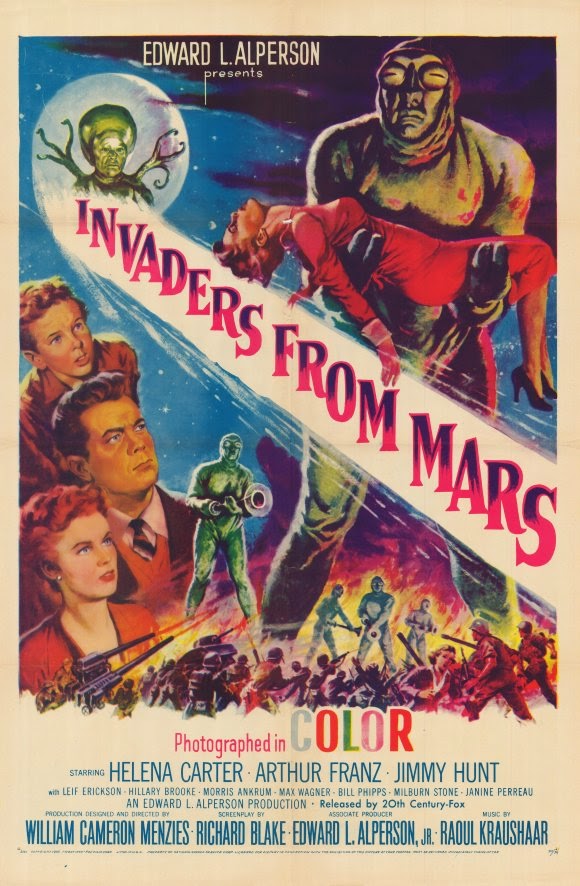 William Cameron Menzies is a force to be reckoned with. He singlehandedly brought the art of production design to the forefront of Hollywood while chaperoning a troubled production to completion as it waded through several directors and a heaving, epic budget. That production was Gone With the Wind, perhaps the single most well-known film on the face of the planet.

He should have quit while he was ahead, because his 1953 sci-fi effort Invaders from Mars is about as exciting as a swift kick to the balls, with equally unfortunate consequences. To be fair, I'm not a huge fan of the genre to begin with, tending to prefer the films that skew more obviously toward horror like The Blob or The Thing From Another World, both of which I reviewed in this post.

But I agreed to take on this crossover for a reason - I wanted to be more informed about this fateful period in the development of genre cinema. So I didn't step into this movie with intent to hate it, and I'm sure I will greatly enjoy at least one of these three films (my heart is set on Them!, if I can ever find a copy of it). OK, I've said my piece. But Invaders from Mars still just isn't very good at all. 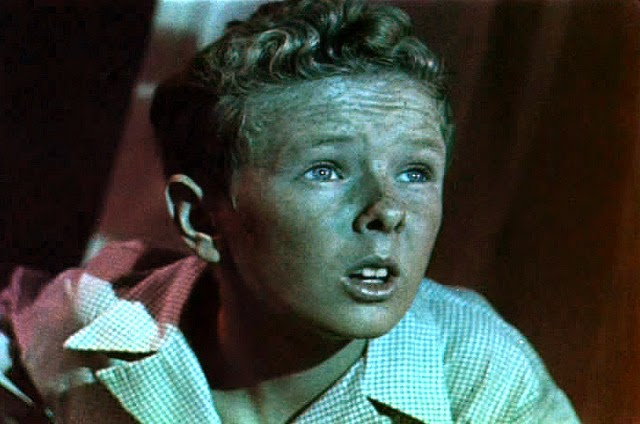 To be fair, some elements are quite terrific for a film with the budget of a packet of corn nuts. But more on that in a moment. Invaders from Mars tells the story of one young David MacLean (Jimmy Hunt), a golly gosh gee whiz corn-fed all-American boy who witnesses a UFO landing in the sandy path outside his house. When his father George (Leif Erickson, perhaps best known for discovering America) goes to investigate, he is sucked into the pit and returns with an altered personality and a sinister mission.

As George collects authority figures and neighbors to be sent into the pit, David teams up with astronomer Dr. Stuart Kelston (Arthur Franz) and child psychologist Dr. Pat Blake (Helena Carter) to gather the troops and combat the sinister Martian menace that is taking over the town. Part Body Snatchers and part Thing From Another World (both of which, admittedly, came later than this film), Invaders from Mars is half Cold War paranoia drama and half exuberant propaganda for the US Armed Forces, complete with a rousing pipe rendition of "The Army Goes Rolling Along" every time the tanks move out.

And boy do those tanks move out. A king-sized chunk of the second act is eaten up by endless stock footage of tanks rolling down rural streets as the calvary inches ever closer toward saving the day and preserving American Freedom. 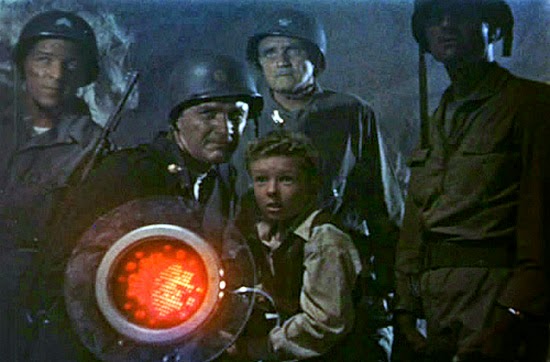 Perhaps the single most American screenshot ever taken that doesn't have a flag in it.

It is quite telling when a film that barely manages to massage itself out to 75 minutes still feels the need to stuff itself with stock footage like Lucy in front of a conveyor belt of chocolate. The first act of Invaders from Mars is actually quite charming with the idyllic 50's haze that swims across it, but after about 20 minutes of primo cheese, the film relentlessly unspools itself, unraveling like a sweater until it eventually dissolves into nothingness.

Quite literally. The film is so full of dissolves by the end, I don't think a single frame exists without some other, equally tedious frame splashed across it. It's quite like watching a slide show of your great-aunt's trip to Omaha. Everything looks exactly the same and equally flat and there's no discernible means of escape.

The charm that the ludicriously low budget manages to wring from the initial scenario quickly wears off during scene after scene of sparse sets, day for night stock footage so stupendously clumsy that I was convinced it must have had some deep secret meaning because nothing intentional could possibly look so bad, and the stagebound, claustrophobic feel of the whole thing. Not to mention the actors who apparently all had dictionaries at home that read "dialogue (n): shouting words at another human being."

To conserve money, the aliens are offscreen for the bulk of the movie, and when they finally do show up... 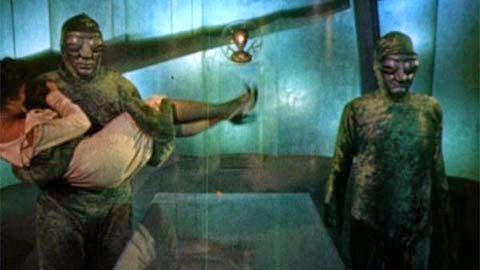 I mean, maybe they were going for the "swamp moss chic" aesthetic. Benefit of the doubt.

These are the mutants, pronounced "mute ants," servants to their host, a head on a platform which is supposedly mankind's ultimate intelligence. This is probably a metaphor for some ass thing or another, but it is buried beneath literal tons of repeat footage of mutants lumbering around like doofuses through damp caves with no discernible geography while military men blow things up in and around the sand pit. At least this guy looks rad as hell in the Makeup That Launched a Thousand Lady Gaga Videos.

I thought maybe we'd end this icy cold review with some actual complimentary comments, just for a change of pace. First off, despite the utterly strange "metaphor" of the Martians and the most dashed-off "it was all a dream or was it" ending in human history, there is some active thematic material to plumb.

It's no different than any other paranoia thriller at the time - "Who can you trust? Are people in positions of authority really the people we should turn to in a crisis? What consequences could there be for sending nuclear weaponry into space? What dangers can befall us if we don't keep watching the skies? What will happen if we don't give bigger budgets to sci-fi movies?" - but it's an early example of the form that would come to power an entire decade of filmmaking. Also there's some interesting stuff with David finding surrogate parents in the two doctors after he loses his own to the aliens' mind control.

The most commendable aspect of the entire film is the influence it draws from German Expressionism in the set design. Although the interiors are Spartan and undecorated, and the houses plainly suburban, the central zone of conflict is a Caligari-esque, fractured bit of work, perfect in creating an actual sense of menace in the film as well as complementing the tone. The only other setpiece which comes even close is the massively long hallway that leads into the police station, creating an imposing sense of dread.

Cool sets can't make a movie better than its story, but at least it shows that there was a mind working behind the camera, and Menzies was nothing if not a great designer mind. It's a real shame that Invaders from Mars is such a wash and I would recommend it to nobody, but I'm glad it's there to help provide the shape of a genre that would produce some of the best subtle comments on society ever committed to film. Live long and prosper. 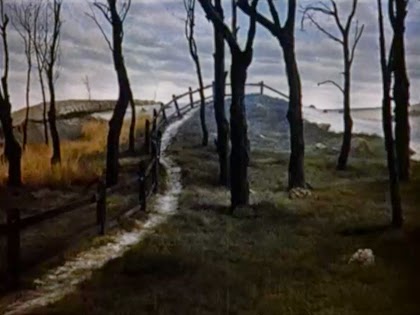 But seriously, look at this. I could marry this freaking hill.