Splatter University 3: The British Are Coming

Since my teacher seems to hate the 50's so much, it's a wonder he keeps showing us these films. Bring me the 80's! Bring me the action!

Oh well, we might as well work with what we've got. And what we've got is a whole boatload of late 50's horror movies from across the pond!

You see, after the end of World War II, we Americans saw fit to help out the decimated European countries financially. Yadda yadda yadda, politics. What concerns us is but one itty bitty portion of all that.

Some of that money went to establishing film industries in other countries to avoid America having the monopoly on filmmaking in the entire world. If that doesn't sound very capitalist to you, listen to this. Once the film industries started booming, we stole their best filmmakers and brought them to Hollywood. USA! USA!

This was a complex deal, in which a portion of the box office would go toward fueling even more films alongside the American money which was not allowed to leave the country. So that's how British production companies ended up with a seemingly limitless pool of American funding.

There was a quota system in place - the UK could only receive the highly profitable American A pictures if they produced a certain proportion of their own films. This led to a lot of microbudget horror films being knocked out to fulfill the numerical requirements to get to the good stuff. These were called Quota Quickies, because the British are required to have a charming nickname for everything under section 9 of the Magna Carta.

Almost completely by accident, it turned out people loved themselves some British horror and a booming industry was created in the late 50's, with Hammer Films at the forefront. More on that in a little bit.

Night of the Demon 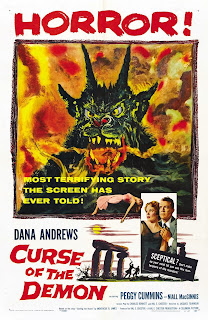 Night of the Demon was evidently a huge influence on filmmakers everywhere, but it's hard to see why today. This British black magic picture features (of course) an American protagonist in Dr. John Holden (Dana Andrews), a psychologist who seeks to refute claims of paranormal occurrences at a symposium in England.

When he arrives, he runs afoul of local cult leader Dr. Julian Karswell (Niall MacGinnis) who puts a death curse upon him. Although he doesn't believe a word of it, he is convinced to investigate the matter by Joanna Harrington (Peggy Cummins), a young woman whose father has just died under very similar circumstances.

Director Jacques Tourner's usual style of "fact or fiction?" (as exemplified by another of his films - the tedious I Walked With a Zombie) is at play here which would be stimulating if anything noteworthy actually happened in the film. For the most part, it's just our two heroes running around trying to discover the secrets of a mysterious piece of paper and that's exactly as exciting as it sounds.

It has a cheesy demon that only appears briefly, an annoyingly obtuse protagonist, and an overwhelmingly slow crawl that is redeemed only by a few scattered scenes of actual tension and the first truly effective jump scare I've seen in a film of its age.

The Curse of Frankenstein

The Curse of Frankenstein was Hammer Films' first real success. In attempting to cash in and pop out a couple Quota Quickies, the Hammer execs had the brilliant idea to recreate all of Universal's classic monster movies. As you can imagine, Universal wasn't too pleased with that, but there was nothing they could do as long as the film was suitably different from the Karloff vehicle. It was based upon a book, after all.

The film... well, it's Frankenstein. No big news there. The most important addition Hammer films made was the use of color film, which was unprecedented for horror in those days. The genre was usually viewed as a B picture medium that didn't deserve the more expensive color stock. But using realistic color allowed the film to display shocking murders (shocking for the time anyway) with blood that was actually red, which captivated audiences everywhere.

Rated X in its native territory for violence (Hammer wouldn't pick up any truly explicit sexual content for quite some time yet, although young Victor is notably more lecherous in this incarnation), Frankenstein made a massive splash across the pond.

The only problem is that the story of Frankenstein is inherently the story of a man without a monster. Watching him acquire it can be a dull affair, and Christopher Lee's (the man who played Count Dooku, for those of you who want their mind's blown) portrayal, while perfectly suitable, wasn't a patch on Big Boris.

The Horror of Dracula 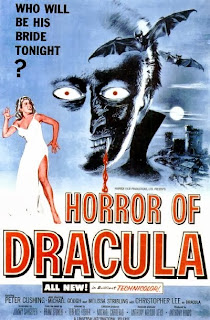 When The Curse of Frankenstein made approximately 90 bajillion dollars in the US, Universal decided that maybe they should give in and fork over the rights to the rest of their monster catalogue to Hammer in exchange for a cut of the American distribution profits. Thus Hammer was granted the freedom to thoroughly explore that universe without fear of being accused of copyright infringement.

What they did with that power was produce a Dracula film so far from the source material that it was rendered almost unrecognizable.

Jonathan Harker (John Van Eyssen) is vamped and murdered about 20 minutes into the film and the rest of the time is spent with Dr. Van Helsing (Peter Cushing) attempting to save Harker's fiancée Mina (Melissa Stribling) from the devilish Count (Christopher Lee), who's now in search of a new bride.

All the great classic vampire elements are here - the garlic, the stakes, the crosses, the thinly veiled sexual imagery. Frankly, it's pretty great, aided by the histrionics of a cast that's clearly having a good time hamming it up to the rafters.