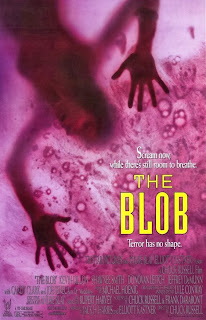 You can never have enough Blob.

This is an opinion held by many, as evidenced by the popularity of Blobfest, a yearly convention in Phoenixville, Pennsylvania that has been going strong since 1958, the year the original film came out. The festivities include four double features (one half of which is always The Blob), 1950s Makeover and Costume contests, special guests, a Fire Extinguisher Parade, and the Friday Night Run Out, where the entire audience runs out of the Colonial Theatre, the location the Blob attacked at the end of the film.

That was all one sentence.

Anyway, it's nice to be reaffirmed in my love for the Blob, the topic I have chosen for my essay in my Horror Genre class. To complete this five page essay (which will shortly become available to you on this blog, should you wish to read an actual academic analysis of a dumb movie about a Blob that eats people), part of the assignment is to watch the sequel (Beware! The Blob) and the 1988 remake.

Since I was already planning on doing that anyway, it was an obvious choice of essay topics.

And since B!tB is stuck in the mail somewhere, I decided to begin with the remake, released exactly 30 years after the original Steve McQueen film.

Things have changed since then (although making a pile of silicone look like it's rolling around is still just as hard as before, evidently). Visual effects have improved tenfold. Horror has risen to prominence as the genre to beat. The beginning of the decade saw the invention of the slasher film.

That last development more than anything else is what informs The Blob of the 80's. This film is about one topless scene away from being a Census Bloodbath entry.

There's a Final Girl, a couple making out in a car and getting Blobbed, a man bursting from the shadows brandishing an axe, not to mention that half of it takes place in the woods. This is no accident. The movie showing in the cinema in the climactic scene is one of the most spot on parodies of the genre I've ever seen. Also, let's not forget about Chuck Russell, whose previous directing gig was none other than A Nightmare on Elm Street 3: Dream Warriors (The Blob also shares screenwriter Frank Darabont with that lovely late era slasher film).

Coming so late in the 80's, there was no way the new Blob could be anything other than a slasher riff. That's what was selling and had been selling for a decade at that point. If that makes it sound stale, trust me it absolutely isn't. Yes, it's a slasher framework but how many "teens in the woods" movies choose a ravenous gelatinous monster as their villain? 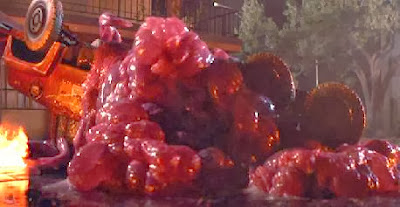 As a preeminent slasher scholar, I can tell you: Not a lot.

Meg (Shawnee Smith of the first three Saw movies) is a sweet young cheerleader from the struggling off-season ski town of Arborville, California. Although the town's economy is troubled, she still has something to cheer about - cute jock Paul Taylor (Donovan Leitch of the Brad Pitt slasher abortion Cutting Class) has just asked her out on a date! Gee whiz! A great deal of time in the first act is spent on teen hijinks (including a bizarre reworking of this ancient joke) in a barely disguised Meet the Meat sequence.

There's Scott (Ricky Paull Goldin), Paul's douchey best friend (his best analogue is Ted from Friday the 13th: The Final Chapter, and I'll bet my life's savings that the Blobmakers have seen that film); Brian Flagg (Kevin Dillon, who has made something of a name for himself with Entourage), the leather clad motorcycle rebel; the town weirdo Reverend Meeker (Del Close); Diner owner Fran (Candy Clark); and her suitor, Sherriff Geller (Jeffrey DeMunn, perhaps best known as Dale from The Walking Dead. This won't be the last time he'll pop up somewhere you least expect it - he'll appear in Christmas Evil, one of our upcoming Census Bloodbath features).

This is a remake after all, so although most of these characters are original, it's obvious that Meg and Paul are the stand-ins for teenybopper heroes Aneta Coursaut and Steve McQueen. Oh, also a meteor crashes to Earth containing a ravenous Blob. That too.

(SPOILERS IN THIS PARAGRAPH) The movie follows the original for a while with the couple driving a Blob-afflicted old man to the doctor. Then the movie tips its hand when it freaking kills Paul dead in just about the most violent manner possible. We just got Psycho'd hard, guys. Our young hero has joined Marion Crane and Casey Becker in the special Heaven for top billed characters who die before the 45 minute mark. Now that the movie has thrown a wrench in the works, Brian Flagg steps up to the plate, teaming up with Meg to help save the town, but the movie has already proved how far it's willing to go - anything can happen. 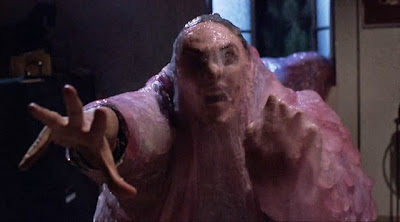 He never lived to see the advent of the selfie. It's hard to tell if this is a bad thing.

It also proves how far gore effects have come in the last 30 years. This is still massively tawdry and cheap stuff, mind you. It's no The Thing, but The Blob is exactly everything a 50's style sci-fi horror flick transplanted into the late 80's should be - tremendous fun with a gonzo flair for increasingly outrageous gore setpieces.

A man gets his arm ripped off as the rest of him dissolves in the Blob, a diner worker is pulled into a sink drain, a woman in a telephone booth is completely engulfed. Faces melt, bones are crushed, and the Blob gushes around with gusto, squealing and thrashing and crushing townspeople with its enormous tentacles (a new and appreciated addition - this feels so much like all the best parts of a cheesy black and white monster movie).

The final third of the film has some commentary on the US government (the monster being a failed biochemical warfare experiment) and it's all well and good but the most important part is the middle, in which nothing much happens but various people around town getting Blobbed. This is fantastic and worth the price of admission even without the witty repartee and cute meta humor. 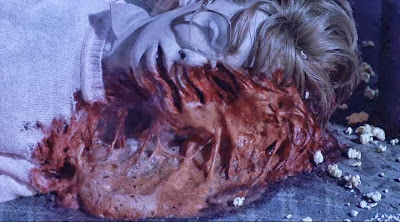 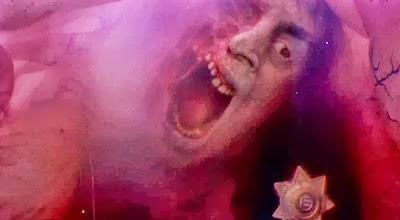 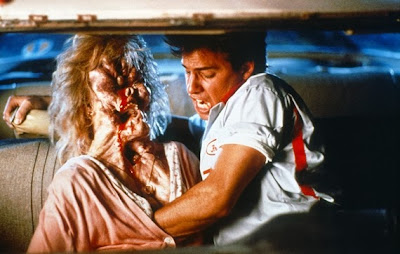 I regret to inform you that you've just been Blobbed.

The Blob avoids the modern remake habit of grittifying everything (Imagine if you will: a grey and world-weary Blob wearing sunglasses and dissolving townspeople as revenge for his dead bride. He keeps going out of a sense of duty but can't shake the nihilistic idea that maybe it just isn't worth it anymore. He's the Blob this city wants but doesn't need anymore.) and embraces its camp pedigree.

There was hardly a better time for sci-fi/action/horror camp than the 80's, and this Blob turns it up to 11. Sillier. 80's-er. Gorier. Blobbier.

Somebody actually says the words "Chew on that, slimeball!"

A manhole cover is exploded with a bazooka because everything explodes in the 80's.

When nothing is taken seriously it's really quite hard to be even a little scared, but it's even harder to not have a good time. 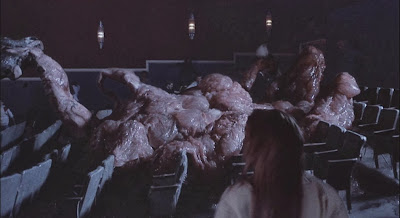 Who doesn't have a good time at the movies?

Also, the film isn't shoddily made at all. (What?) In fact, the editing is even rather brilliant at times, keeping in mind the campy tone. The opening shot of a cemetery pans over to a rowdy crowd cheering on a high school football game; a particularly Blobby scene cuts right to a kid slurping up Jello; and Brian's attempt at an Evel Knievel style stunt is intercut with the cheerleading squad chanting "GO! GO! GO!"

Not quite Academy Award level work, maybe, but it shows that a lot of thought and love went into this film. And if you don't agree, you can go Blob yourself.

Body Count (and the very fact that it needs a body count is telling): 21; also half of the audience of the movie theater and a multitude of random townspeople.
TL;DR: The Blob is a perfect remake, capturing the tone and humor of the original but ramping up the visual effects with modern flair.
Rating: 9/10
Word Count: 1418
Reviews In This Series
The Blob (Yeaworth Jr./Doughton Jr., 1958)
Beware! The Blob (Hagman, 1972)
The Blob (Russell, 1988)
Also sprach Brennan at 11:57 AM