Serendipitously, over the past two weeks in my horror class, we've been focusing on 50's horror, which is a genre that had, I think, zero entries in my "Movies I've Seen List." I'm well on my way to being the most celebrated horror scholar of 2025.

I will accept applications to be my personal assistant starting Monday.

The Thing From Another World 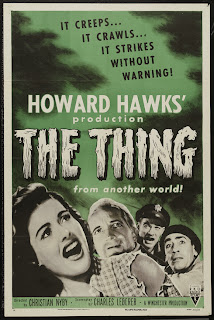 And it turns out the Thing doesn't shapeshift! John Carpenter, you misleading scoundrel!

That said, turning the Thing into a shapeshifter in the remake is a work of brilliant genius, especially considering that he shows no inclination for doing so in the original film. Good work, John. A+.

Many important horror directors cite The Thing From Another World as a major influence, perhaps because all the other films from the decade were even worse. In the immortal words of my professor, "The best thing about the 50's was that they ended."

Not that The Thing is bad, it's just egregiously slow and overwhelmingly optimistic by today's standards. The state of horror in the 50s was at an all-time ebb and it really shows. In the aftermath of World War II, nobody felt the need to watch scary movies, the real horrors were out there across the pond.

And now that the war was over and the Great Depression was a quickly receding memory, things began to look up for the American people and we entered an age of consumerism and complacency. The advent of TV was a massive blow against Hollywood and the studios hadn't quite gotten on their feet yet.

The Thing From Another World, one of the best films of the entire period, was turned down by all of the major studios until the relatively dinky RKO Pictures finally picked it up with a budget of $40,000.

The fact that it's the best is very indicative of the time period because by God does it take a long time to start up. The Thing doesn't make its first move until about an hour into the film.

An Arctic military base investigates a nearby explosion and finds that a flying saucer has crash landed in the ice. They excavate a body and, when the ice accidentally melts, release a bloodsucking creature out into the snow. They argue about whether to research it for the betterment of mankind or squash it before it can squash them.

Then they fight it and they win because screw you, Science, this is the 50's.

The single best element of the film is Nikki (Margaret Sheridan), the sexy and capable love interest of Our Hero, Captain Patrick Hendry (Kenneth Tobey). Howards Hawks was known for his style of the women being just as tough as the men and in the age of housewives and suburbia the idea of a strong, sexy woman was downright radical.

The Thing is a pretty fun film when all is said and done, but if I were you, I'd go with John Carpenter's 1982 remake and watch that guy's stomach turn into a mouth again.

Creature From the Black Lagoon 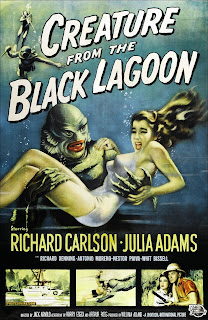 Television at this time was still stealing viewership from cinemas, so movie theaters fought hard against those tiny black and white boxes with big screen color spectacles, the likes of which were impossible to recreate in one's own home. Thus was born Creature From the Black Lagoon, Universal Studios' second 3D picture and their only successful monster movie of the decade.

The film centers around two ichthyologists, David Reed (Richard Carlson) and Kay Lawrence (Julia Adams), who are not quite married (a weak stab at feminine independence that dissipates as Kay goes from Smart Science Woman to Damsel in Distress, alternating between "standing there and shrieking" and "schmooping with David in his swimsuit") and are currently working for Mark Williams (Richard Carlson), a wealthy man whose lust for the pursuit of science is only matched by his lust for the massive profits he makes off of it. When an archaeologist discovers a partial fossil of a webbed foot deep in the Amazon (despite the fact that the natives are ludicrous Mexican stereotypes), the three travel down to the Black Lagoon, a tropical paradise from which no explorer has ever returned in pursuit of The Missing Link of Man's Evolution from the water.

Black Lagoon is essentially a mashup of the anti-Science themes from The Thing (Man shouldn't interfere with nature! Nature will eat you!) with the forlorn misunderstood monster found in Frankenstein. The Creature (Played by Ricou Browning in water and Ben Chapman on land. Heaven knows what they did in the scenes where he climbs out of the water onto the boat. Maybe they shared halves, like a horse costume.) spies on the scientists from his underwater dwelling and more or less immediately becomes enamored of Kay. His pursuits of her lead to a series of unfortunate crew member killings and the group has to decide whether to capture the monster for Science or kill it in order to, you know, keep being alive.

They end up deciding on Getting the Hell Out of There while they still can as their crew is whittled down in record time, but the monster won't give up that easy. This is a fairly entertaining entry in the Dude in a Rubber Suit Chases People Around genre, but by the third or fourth time the scientists put on scuba gear to go dump chemicals on the monster, I was ready to backstroke my way outta there.

But what of The Creature? What made this movie more successful than any of Universal's other horror attempts in this time period?

Although the stiff rubber suit doesn't do wonders for the monster's credibility, the performance of the men inside is inspired. Somehow while simultaneously drowning in a heavy suit and being blinded by a mask, Browning manages to swim in a manner that suggests that this Creature hasn't evolved for thousands of years and is intimately familiar with its watery environment. That's quite a feat of physical acting for a man who isn't even credited.

Although the suspense slowed down at the two-thirds point (the film did actually creep me out in an early sequence - a rare feat for the film's age and pedigree), the Creature's travails resonated with audiences and both men's performances allowed theater patrons to attach emotions to a frankly ridiculous looking bug-eyed monster.

A quick note before we go: please admires director Jack Arnold's handiwork for a moment. 3D cameras in the 50's were bulky affairs, with two cameras attached side-by-side to an enormous rig. To shoot his majestic and ambitious (and frequent) underwater shots, not only did they have to waterproof both cameras, they had to stick this entire contraption underwater and move it around, all for the sake of a gimmick that is used to sell Smurfs merchandise.

The clincher? Arnold is blind in one eye. He can't even see in 3D. 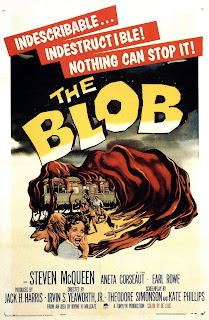 Before you read the rest of this review, please press Play.

This revoltingly twee Burt Bacharach composition is the theme song to The Blob and there has not been a single second since I first heard that is hasn't been playing in my headphones, on my car stereo, or quietly somewhere in a back corner of my mind.

I bothered Sergio with it when we were in line for Escape From Tomorrow (more on that... tomorrow) and Henri and I have practically choreographed an entire routine that involves us leaping up and down and waggling our arms like a Native American rain dance.

This resolutely unterrifying song is but the first toe in the waters of The Blob, a campy classic sci-fi B movie, and my absolute favorite film screened in class so far.

The film opens like all good 50's movies - at Make Out point, where Steve (Steve McQueen) and Jane (Aneta Corseaut)'s night of passionate starlit smooching is interrupted by one of the aforementioned stars comes hurtling down to Earth. At the crash site, an old man (Olin Howland) finds a gelatinous mass that isn't a big fan of being poked with sticks. It gloms onto his hand and Steve and Jane rush him to the doctor's office.

They are sent out on an errand and return to discover the doctor and his nurse have vanished, and Steve thinks he might have seen the doctor being dissolved in a mass of goo through a side window. Or maybe it was a Jello dessert he made for a potluck, who knows? The cops certainly don't believe him.

On their quest to discover the truth, a friendly gaggle of rowdy schoolboys races them in the streets and assists them in their journey, but not before quipping and goofing and malt shopping and whatever else it is those dang kids did in the 50's when they weren't rock 'n rolling and roller skating.

The Blob is basically American Graffiti with a gelatinous blob monster and this is great.

The effects are astounding considering the time period, Steve McQueen makes his handsome movie debut, a giant blob comes bursting out of the projection room and devours a movie theater, the monster is destroyed with fire extinguishers and airlifted to the Arctic...

What's not to like? This is camp sci-fi at one of its highest points.

Before this day, I had no interest in the film but I have seen the error of my ways. Consider me a Blob convert. Soon you'll see me going door to door asking people if they've found Blob.

If only I can get these dang pamphlets printed.