Cardboard Science: Insane In The Membrane 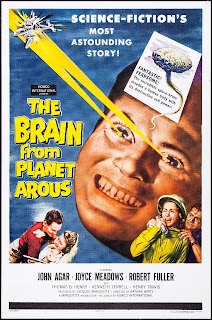 Welcome back to our second annual crossover with Hunter Allen over at Kinemalogue! It’s time for our second 50’s sci-fi flick, and either I’m building up a tolerance or Hunter picked titles with more Brennan-y appeal this time around (I’m still nursing wounds from Invaders From Mars). Our newest foray into the vast thicket of B-movies is 1957’s The Brain From Planet Arous, a schlock spectacle of otherworldly proportions. 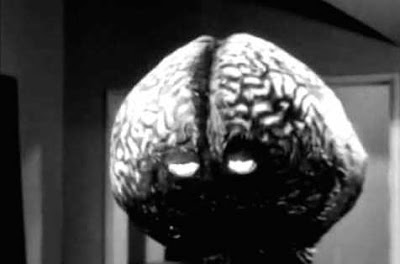 Here’s the skinny: Steve March (John Agar) is one of America’s leading nuclear scientists, because the movie would have its 50’s sci-fi license revoked if the A-bomb wasn’t in there somewhere. When he and his sex-on-a-stick partner Dan (noted Western actor Robert Fuller) make a trip to investigate the high levels of radiation at the nearby Mystery Mountain (which was apparently named by the guys who wrote Lone Ranger radio serials), they encounter a giant floating brain named Gor (Dale Tate). Two guesses as to what planet he’s form.

Gor possesses Steve’s body via a clumsy superimposition effect that jerks the projection back and forth until it lines up properly. He’s hellbent on using his magical explodey powers and superior intelligence to take over the world and force Earthlings to build a fleet of ships to launch an attack on his home planet, the name of which slips my mind. However, once he meets Steve’s fiancée Sally (Joyce Meadows), he falls instantly in love and gets distracted attempting to tonguelessly kiss her as hard as the Hayes Code would allow. 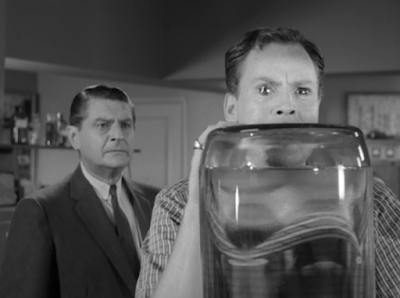 I guess you could say he’s from Planet AROUSED.

Sally and her father John (Thomas B. Henry) investigate Steve’s sudden fit of tumescence and come across Zol (also Dale Tate), an Arousian policeman (would that be the Thought Police? Buh dum chh), who’s on a quest to capture Gor. He inhabits the body of their dog George (and I will hug him and pet him and squeeze him), and together they team up to find out Gor’s plan while keeping watch on him. He can only be destroyed when he leaves his host body to gather oxygen, which he only does once every 24 hours. 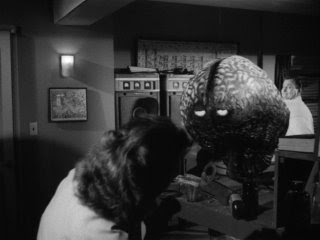 i.e. About as often as the budget allows.

The plot has two modes: “Sally fretfully fakes love for ‘Steve’ while he cackles and drops hints about his evil plans,” and “Gor explodes some stuff in the Santa Clarita desert and makes demands of the UN.” This back and forth gets a tad dull but at 70 brisk minutes of content that’s about as racy as Basic Instinct for 1957 audiences, it more than makes up for its redundant repetition.

The Brain From Planet Arous boasts all the hallmarks of a cheesy 50’s crapfest. Gor immediately outlines his evil plans to Steve, so thoroughly that he would have used a PowerPoint if he could. The acting is stilted and overly indicating. And the special effects are charmingly cheap, like an action film made by the kids in your English class. Hair dryer radar guns, perfectly healthy looking “charred” corpses, and big ol’ brain models wobbling around on strings abound in the film. At least the overly simple ending lacks the absurd abstraction of the antimatter nonsense of The Giant Claw. However, depending on your outlook, this can either go in the pro or con column.

We obviously know where Hunter stands, and I’ve been trained to love DIY filmmaking by my abysmal slashers, so for me at least, I enjoy the cut of Brain’s jib. The only truly distressing element is the film’s insistence on showing every detail of the characters slowly traipsing through the desert and tripping over rocks, papering it over with blibbering string music designed to make you feel like something is actually happening. 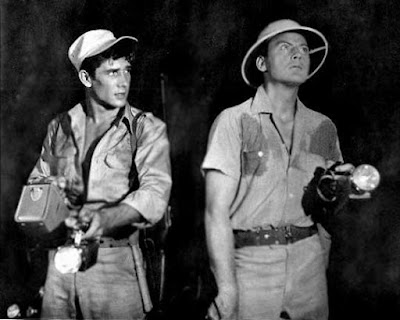 I can forgive a bit of padding if it’s in service to a film this utterly bizarre. The eerie calmness with which our protagonists accept the idea of a giant floating brain is just the tip of the iceberg. For one, the dialogue is still astoundingly clever Much like The Giant Claw before it, the screenwriters have an inherent skill for banter hat they can’t seem to shut off, even if their plots fly mightily off the rails. The fact that any part of this movie was accomplished with skill leads to the sneaking suspicion that maybe other people on set also had talent.

I know it’s a ridiculous notion, but I can’t help but find that certain scenes lend credence to it. A shot of Steve’s distorted face through a water cooler is one such moment, a visual triumph that’s far out of the movie’s apparent league. It obfuscates reality, creates a sense of unease, and – in short – succeeds where the giant rubber brains intrinsically fail. And the film does have one cool effect: Whenever Gor activates his power, Steve’s eyes become glassy marbles of evil. It’s a very low fi, Village of the Damned trick, but that’s exactly why it works so well even to this day. It might just be a pair of contacts, but there’s something so ontologically wrong with that look that it short-circuits your wiring.

Once you get into this mindset, you start considering the possibility that maybe the brain movie people were actually using their own brains as well as the ones they borrowed from the neighbor kid’s model maker kit. This approach works wonders, unearthing a glittering deposit of potential subtext While TBFPA’s approach to nuclear woes isn’t as cut and dry as, say, Them!, there are several veins of more personal horror to mine.

There’s the obvious parallel between Gor and egotistical, powerful leaders who claim to have the “power of pure intellect,” but use it to coldly strike people down for the greater good. But his possession of Steve’s body and mental faculties creates a Jekyll and Hyde/Wolf Man scenario. Gor acts as Steve’s ravenous id, pushing the civilized man into the pursuit of money, power, and sex. In the buttoned-up 50’s, these primitive drives were especially discouraged, and Steve’s main struggle is for control over the desires that threaten to rule his genteel body.

On the flip side, from Sally’s perspective, this could represent women’s fears of the changing societal and sexual mores as America slipped implacably into the 60’s. Sally is hardly a strong character, whimpering and weeping every chance she gets, but she gets some of the most screen time and her triumph lies in asserting the roles of a clean cut, heteronormative suburban couple. Think about it. 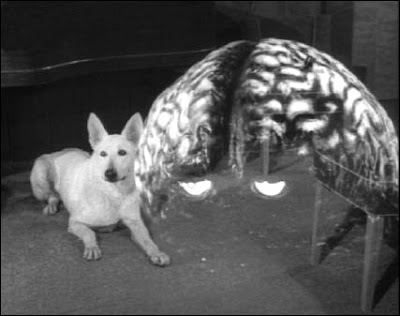 Well, either that or producers had two weeks and some brain puppets and decided to make a movie.

The brilliant thing about The Brain From Planet Arous isn’t its intelligence, but the fact that there could be more beneath the surface. It works on an analytical level and it works – to a point – on a structural level, so either way you choose to take it, it delivers. How come assembly line filmmaking seemed to work so well back then, and today we’re stuck with a half dozen Transformers movies? The world is a scary place.