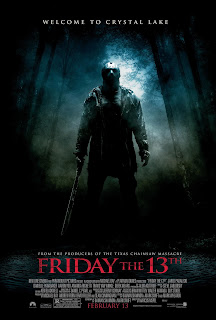 Good lord, I done it.

Saturday's screening of the Friday the 13th remake in honor of Jason Voorhees' 69th birthday (a big'un, but he's still spry as a nubile teen, the old bastard) formed the very last entry in my long-running marathon of the extant Friday franchise. For the time being, we're at the very end. A moment of silence, please.

Moment over. Time for me to resume not shutting up. The fourth title to get the remake treatment from prolific horror copiers producers Platinum Dunes, Friday the 13th was put in the capable hands of Marcus Nispel, the director behind the surprisingly decent update of The Texas Chainsaw Massacre. The results were... surprisingly decent.

Horror remakes get a lot of flack, and a lot of them deserve it. But among the pantheon of revisited horror classics (among which are numbered the Rob Zombie's evisceration of Halloween and the atrocious Jackie Earle Haley rendition of A Nightmare on Elm Street), Friday the 13th stands out as a film that is shockingly easy to like. Perhaps this stems from the fact that, unlike the aforementioned films, the original 1980 Friday the 13th is not a masterwork of cinema.

It's a terrific and historic slasher film for many reasons, but cinematography, acting, writing, and directing are not included among them. This is a film with room for improvement, and while I would balk to say I enjoy the remake better than the original film, it's not exactly a stain on a hallowed artistic masterpiece. 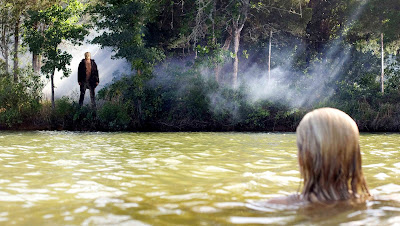 And come on, could any film possibly be worse than Jason X already was?

Friday the 13th has a fascinatingly wonky structure, loosely remaking the events of the first four films rather than just the original plot, for obvious reasons. Friday fans don't want to see Pamela traipsing about in the woods again. They want Jason Motherlovin' Voorhees, and that's what they got. After a brief and strikingly terrible recap of the final scene from the original film, where Mrs. Voorhees (Nana Visitor) gets beheaded by a camp counselor (Stephanie Rhodes, who looks far too much like an Abercrombie bag model to do justice to Adrienne King), we pick up in the modern day with a group of campers, two of whom are on the lookout for an illicit crop of weed rumored to be growing along the banks of mythic Crystal Lake.

[FIRST ACT SPOILERS] During a truncated 25-minute murder spree, the bag-headed Jason Voorhees (Derek Mears) tears through the campers with alarming alacrity, capturing one of their number - Whitney Miller (Amanda Righetti) - and dragging her back to his underground lair as his prisoner. Thus the false first act ends, in a halfway effective attempt at misleading the audience a la Janet Leigh in Psycho. At which point we jump six weeks into the future, where a new crop of revelers arrives at a lakeside property for a bit of R&R. By that I mean Rolling joints and Rcheating on their girlfriends.

Our Meat for the evening consists of Trent (Travis Van Winkle), the preppy dickwad whose father owns the house and whose supreme douchiness can only be contained by his two entire collared shirts; Jenna (Danielle Panabaker), Trent's girlfriend who kind of hates him; Nolan (Ryan Hansen), a surfer bro who looks like an Owen Wilson puppet; Chelsea (Willa Ford), his sexy blonde girlfriend - this is a Michael Bay production, after all; Lawrence (Arlen Escarpeta), a young black man who's trying to get his music label off the ground and makes racial jokes about 199% of the time; Chewie (Aaron Yoo), a kind of gross slob with the inhibitions of a brainless mollusk; and Bree (Julianna Guill), the blonde vixen at large who exists only to act slutty in the general direction of the camera.

The group has several run-ins with Clay (Jared Padalecki), who is puttering around the township on his motorcycle searching for Whitney, who is his estranged sister. Trent is the worst, so he ignores his plight and shouts at him, but Jenna has a heart so she accompanies him for a search of the nearby abandoned camp. Somewhere along the way, Jason finds himself a hockey mask and picks up where he left off, plowing through the partiers like they're made of tissue paper. 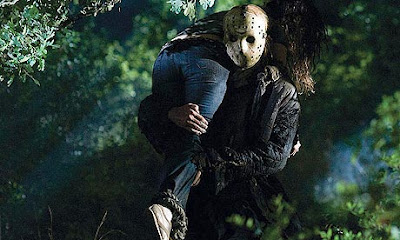 He's very territorial. Like a dog. Or me, when I have gelato.

As you can probably tell from the capture and enchainment of Whitney, Platinum Dunes hadn't entirely grown out of the dreary, torture porn-esque phase of Chainsaw and its prequel. Several of the deaths are a bit more prolonged than they might have been, and Jason's new MO involves a variety of traps laid around the forest, waiting to ensnare some brittle bones. These scenes can be a bit dreary and become especially unwatchable when we have to spend any amount of time with the vulgar redneck denizens of Crystal Lake, who seem transported directly from Nispel's nightmare vision of backwater Texas.

However, the film largely sloughs off these scenes after the first act and, excepting a necessary return to the underground tunnels in the finale, manages to sustain its focus on what the franchise does best: bloody death and ridiculously unnecessary sex. And you know what? It's fun, damn it. 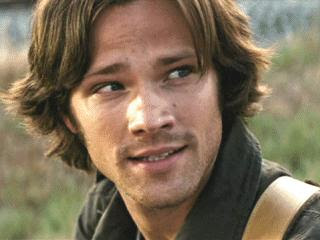 Though with equally questionable haircuts.

Some scenes even manage the campy, ineffable fun of the original franchise, almost rivaling the early days in terms of sheer gaudiness. One moment in particular (a raunchy sex scene between Trent and Friendly Neighborhood Vixen, Bree) is sustained, laugh-out-loud hilarity for two indelible minutes. Many of the kills are likewise a major return to form, full of splashy gore and improper use of household garden tools.

Two more strengths mark the film: The cinematography (by Daniel C. Pearl of the original Texas Chain Saw Massacre) is extremely capable, capturing the darkness of the forest at night while still giving the frame plenty of depth and full visibility, allowing shafts of light to delicately arc across with unexpected beauty. And last but not least, Derek Mears is a terrific killer. He doesn't have the personality of a Kane Hodder, but his Jason is full of vigor and rage; a terrifically solid presence that absolutely justifies the fear and shock that the characters feel. 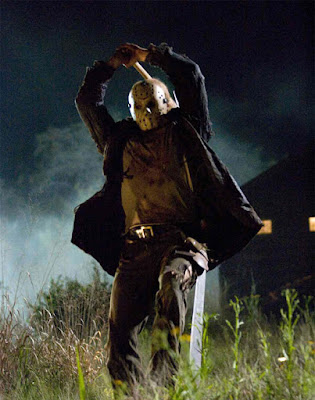 That said, the film obviously isn't perfect. The production design in Jason's lair is fabulously overwrought (Water pipes! Clinking chains! Creepy dolls? An overturned school bus!), turning what was already a pretty bad idea into a dime store spook show, and the film can't sustain Jason as a character based on the mythology present, which absurdly lacks the ability to stand on its own. Honestly, there is hardly any point in calling this film a remake, considering that a good half of the sequels that came before it were more self-sustained (and shamelessly plagiaristic). It's merely a particularly well-made dumb sequel that brings nothing new to the table save an utterly strange structure that bursts across the screen in fits and starts.

The tension stalls in the underground caves, which eradicate any sense of urgency with scenes that seem to take place in an entirely separate dimension where time doesn't work in quite the same way as our own. Like Narnia, but with more inexplicable plumbing grates.

But we take the bad with the good. Or, in the case of slasher films, we take the worse with the bad. And at the end of the day, against all odds Friday the 13th is a good time at the movies. Hardcore retro fans will have you believing it besmirches the good name of Mr. Voorhees, but some people try their hardest not to have fun. Turn your brain off, have a blast, watch some axe impalements. I don't see nothing wrong with that.

Killer: Jason Voorhees (Derek Mears)
Final Girl: Whitney Miller (Amanda Righetti) feat. Clay Miller (Jared Padalecki)
Best Kill: While hiding under a dock, Chelsea is stabbed through the top of the head with a machete. When Jason pulls it back up, this drags her above the surface of the water, revealing her breasts. It's basically a perfect encapsulation of the entire series in one shot.
Sign of the Times: Let's just say that Whitney would not be chained up in an underground cavern if Jigsaw hadn't come to town five years earlier.
Scariest Moment: Clay and Jenna hide under a pile of canoes while Jason furiously searches for them.
Weirdest Moment: Lawrence decides to masturbate in the living room. To a winter catalogue.
Champion Dialogue: "Your tits are so juicy, dude."
Body Count: 14
TL;DR: Friday the 13th is a grim, but surprisingly decent remake of a slasher classic with room to grow.
Rating: 7/10
Word Count: 1675
Reviews In This Series
Friday the 13th (Cunningham, 1980)
Friday the 13th Part 2 (Miner, 1981)
Friday the 13th Part 3: 3D (Miner, 1982)
Friday the 13th: The Final Chapter (Zito, 1984)
Friday the 13th: A New Beginning (Steinmann, 1985)
Friday the 13th Part VI: Jason Lives (McLoughlin, 1986)
Friday the 13th Part VII: The New Blood (Buechler, 1988)
Friday the 13th Part VIII: Jason Takes Manhattan (Hedden, 1989)
Jason Goes to Hell: The Final Friday (Marcus, 1993)
Jason X (Isaac, 2001)
Freddy vs. Jason (Yu, 2003)
Friday the 13th (Nispel, 2009)
Also sprach Brennan at 8:10 AM