This Is Your Captain Speaking

Today is a very special day. Since my graduation in May, I've been working hard to become a full-fledged grown-up person. And, lamentably, I seem to have achieved this goal. I have found a job and am thus embarked upon a course that will either lead to a successful career or the demise of the human population of this world.

Starting today, I am now a horror news editor for Arrow in the Head, the horror wing of JoBlo.com. If you add that to my current job at The Backlot, it's almost like I'm a real person!

If you are so inclined, you can view updates of my new work in the right hand column above my Backlot widget.

In honor of my super cool new job, our post today will be...

#5 Coach is Hoist by his Own Petard in Final Exam 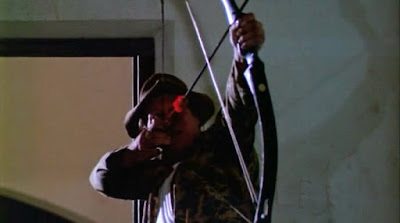 One of my favorite things in slasher movies is when the heroes who triumphantly arrive at the last minute to save the Final Girl are unceremoniously offed seconds later. The only way those scenes could be improved is if the guy brings a hilariously exaggerated, outmoded weapon like, say, a bow and arrow, which still somehow gets turned around and used upon him in a matter of minutes. What a great film. 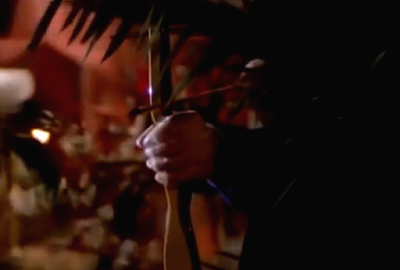 What I love most about the scene where Megan is shot with an arrow is the fact that it's such a deliriously out-of-place murder method in a Midwest shopping mall. The 1984 slasher was a particularly desperate strain, so they had to resort to scenes like this to keep raking in the cash, and I can't say I have any complaints about that.

The Friday the 13th remake doesn't get enough credit for its silly, overwrought deaths that call back to the best of the old franchise. My personal favorite is a double death, beginning with that of Nolan who finds an arrow spontaneously thrust through his skull while driving a boat, which then immediately runs over his girlfriend who was swimming nearby. Classic. 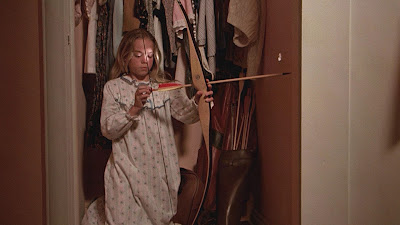 Little siblings can be annoying sometimes, but I think Beverly holds the world record for most annoying sister. Not only does she carve a peephole in her closet door and sell time to neighborhood boys who want to watch Beverly change (which she always does while dancing to the hits of today, naturally), she also wings an arrow through it, shooting her sister in the eye. Kids, am I right? 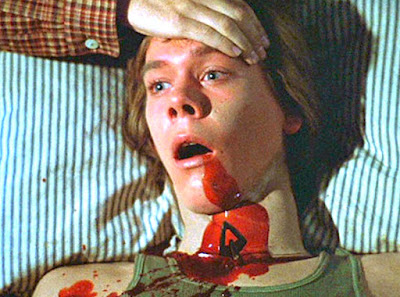 While he's enjoying a nice post-coital smoke, Kevin Bacon's character Jack gets a nasty surprise in the form of an arrow through the back of his mattress. That's what you get for doing anything at Camp Crystal lake besides respectfully buttoning up your blouse or being boring.
Word Count: 574
Also sprach Brennan at 1:35 PM