I Can't Bear It 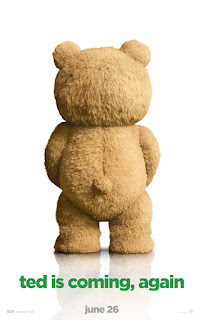 The most striking thing about Ted 2 is the fact that it’s actually marginally better than the original Ted. It’s not like that was actually a high bar to clear, and it doesn’t exactly do the film any justice, but it does put the film in the unique and infinitesimally miniscule pantheon of comedy sequels that improve upon their predecessors.

That’s realty not saying much.

Ted 2 opens with perhaps the most unlikely plot twist of all: Seth MacFarlane getting married. Yes, the toked-up, foul-mouthed, magically sentient teddy bear Ted (MacFarlane, who also directs and writes and may or may not have provided some of the sperm) is getting hitched, to his airhead cashier girlfriend Tami-Lyn (Jessica Barth). A year later, when they decide to adopt a kid to save their marriage (a paralyzingly stupid decision that is not once played as a joke, which worries me), it comes to light that Ted is not viewed as a person, but as property by the state of Massachusetts.

He quickly loses his job, his money, and even his marriage when it is annulled by the state. Together with his best friend John Bennett (Mark Wahlberg) - who is still reeling from his offscreen divorce with Mila Kunis – and their lawyer Sam (Amanda Seyfried), a 26-year-old who is working pro bono because it’s her first case, they must prove Ted’s personhood to the court and save his family.

Unfortunately, the deeply weird and covetous Donny (Giovanni Ribisi) has returned and has teamed up with Hasbro executive Tom Jessup (John Carroll Lynch, AKA freaking Twisty the Clown from American Horror Story: Freak Show) to steal Ted back, vivisect him, and mass produce a new line of living teddy bears. 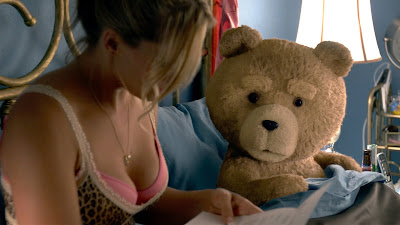 Could you imagine? A world of cloned MacFarlanes running around? That’s straight outta Lovecraft, right there.

So let’s get down to brass tacks. Is Ted 2 funny? The answer to that is a dissertation-worthy quandary, but I’ll attempt to simplify it here: Yes and no.

When the humor in Ted 2 is Yes, it is spot-on terrific. If you’re open to the sort of vulgar profanities that are MacFarlane’s major export, there’s a lot to like. There are four lines that are eye-poppingly funny no matter how you slice in (delivered – in descending order of brilliance – by Wahlberg, Barth, a featured extra, and MacFarlane), four or five laugh-out-loud funny setpieces, a couple decent running gags, and a solid array of the previous film’s Clerks-type conversational that rounds out the pack.

But when Ted 2’s humor is No, it instantly and incurably derails the production. On top of the excessive Family Guy overspill (useless non sequitur cutaways, inexplicable musical numbers, and regurgitated pop culture references abound, though there’s thankfully not too much of the show’s excessive violence or over-the-top, anti-comedic pacing), the film stages an overabundance of messy slapstick (sometimes quite literally), reheated Ted 1 gags, and – oh – unadulterated bigotry.

If there’s one thing I’ve learned about Seth MacFarlane from Ted 2, it’s that he thinks gay people are terrifying. And that’s he quite possibly never met a black/Asian/transgender/Portuguese person. And that he might not even be aware that Latinos are real. Also, he thinks domestic abuse is hilarious.

It’s every kind of racist, transphobic, homophobic, reductive waste that spends an entire two hours discussing the topic of personhood but labors to make sure that the only lines given to a black female are exclusively about her being stereotypically black. It’s hateful, damaging, and ugly. And while it’s not as ubiquitously present as some of his other “edgy” work, the film’s faux-progressive subject matter throws each of these moments into sharp relief. 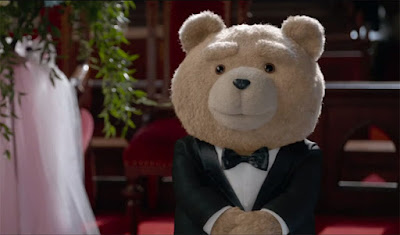 Also he makes a “fifty shades of bear” joke. That’s not even a pun!

There is exactly one good thing about Ted 2 aside from its occasional spurts of comedy the core performers are pretty uniformly terrific: Jessica Barth is the film’s secret weapon, giving depth to a character so one note that her sheet music could be written on a Post-It, and everybody else fares more or less equally well. Amanda Seyfried brings a necessary moral center to the proceedings, Mark Wahlberg is astoundingly adept at navigating tricky comic timing, and I can even grudgingly admit that Seth MacFarlane can deliver a line when he’s in the mood.

Some of the cameos are weak (and it should come as no surprise that returning actor Sam Jones is wooden as a post, considering his track record), but for the most part, everybody in the film feels like they belong in this universe, for better or for worse, even the bit parts (AKA anybody who isn’t white or pretty). The only disappointment is Giovanni Ribisi, who doesn’t turn in a bad performance so much as one that can’t match the effervescent oddness that rendered him the best part of the original film. 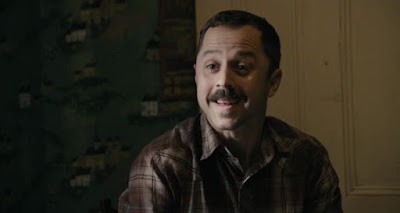 I'm sorry, man. I loved you as Phoebe's brother in Friends. And as That One Guy in Every Movie.

So that just leaves us with the odds and ends (which, frankly, is what most of the plot is composed of). The conflict wraps up too fast and fails to reach the inexplicably high stakes of the first film, the camerawork sometimes resorts to sloppy reality TV-esque handheld that kills the pacing of an otherwise slickly edited movie, and the Seth MacFarlane original song “Mean Old Moon” is surprisingly pretty, but hyperbolically useless and self-indulgent from a narrative perspective.

Once again the CGI used to create Ted is flawless, so much so that you forget that he’s not actually a real thing. So congrats to the visual effects crew for putting together the most effortlessly valuable portion of the movie, for which they will get the lowest amount of credit. Hollywood is weird. Stay in school, kids.

Oh, and Ted 2 attempts to wrap things up in a soppy emotional climax that it in no way earns. So, at the end, what I have to say is this: Ted 2 should be half an hour shorter and Seth MacFarlane needs to take a course in basic human empathy, but other than that (and we can’t underestimate the profound hugeness of that “that”), it’s pretty OK in my book.