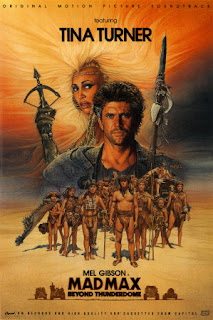 Several things happened during the four year gap between the release of Mad Max 2: Road Warrior and Mad Max Beyond Thunderdome, things which had an immense impact on its production:

1) George Miller was trying to get an original film off the ground, but the studio encouraged him to sauter that plot (of an adult discovering a Lord of the Flies-type group of children in the wild) onto a Mad Max storyline.

2) George Miller's producing partner Byron Kennedy passed away in a helicopter accident while scouting locations for the film.

These first two resulted in a shattered, distracted auteur splitting his time on the film with co-director George Ogilvie, deigning only to direct the action sequences and leaving the character stuff to the man behind The Feds: Deception. The third resulted in... 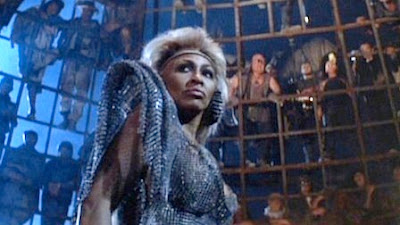 Mad Max Beyond Thunderdome opens with a shot straight out of Lawrence of Arabia - a bleak, irradiated wasteland of sand and dust being cut through by a camel-driven wagon. The wagon is attacked by a pilot (Bruce Spence of The Road Warrior, playing a different aeronautically-inclined character) and out tumbles out Max (Mel Gibson), an ex-cop and desert wanderer with a truly unfortunate case of Braveheart hair. 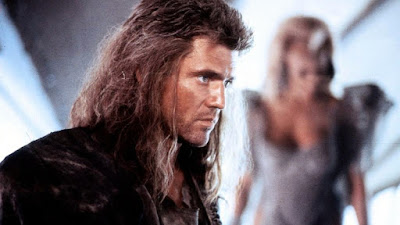 Every man dies. Not every man really dyes.

Following his stolen equipment, Max comes upon Bartertown, a desert shantytown ruled by the flashy and emphatic Aunty Entity (Tina Turner). Their primitive government is literally run on crap - their energy is provided by the excrement of pigs in the subterranean methane dungeon known as the Underworld. This area is led by MasterBlaster (Angelo Rossitto & Paul Larsson), a smart, tiny man who combines his powers with a huge, brute warrior with an iron mask by riding on his back.

Aunty hires Max to assassinate Blaster by brawling with him in the Thunderdome, Bartertown's cage match dispute system. Then a whole new story starts, whereupon Max stumbles across the aforementioned Lord of the Flies kidlets, a tribe who have taken residence in a nearby gorge and the only ample water source in the wasteland. Upon his arrival, they take him for the missing leader, Captain Walker, and beg him to take them to Tomorrow-Morrow Land, which is one of their many irritating slang words, this one referring to the gleaming cities of the past, which they still believe to exist.

Max reluctantly tags along to help them find a better home, though, honestly, their camp seems like a McFreaking paradise compared to the barren dystopia surrounding them. Thus begins the most conflicting sequence in the film as it shifts between Goonies-style slapstick antics and the requisite nailbiting car chase sequences.

It's like a cross between Fast & Furious and The Magic School Bus.

It's terrifically uneven, spasmodically twitching between both modes and reducing the high stakes of the previous films to useless tinder. The frustrating thing is that, when the film is good, it's genuinely superb. The closing chase is an exciting, natural extension of the tanker chase from Road Warrior, pitting a herd of cars against a runaway train, and the bungee-jumping acrobatic fight in the Thunderdome is an unforgettable mixture of camp and overzealous intensity.

But it takes ages for the film to return to the series' characteristic automotive splendor (in fact, I don't believe we even see a car in use until well past the hour mark), and the adventure sequences with the tribe of children are achingly over-the-top. When they're busying themselves with wacky antics like hitting people with frying pans and cheerily misunderstanding simple things, I half expect Robin Williams to come bursting in on a skateboard.

This inanity permeates the rest of the film, spurred on by the spirit of 1985. Quips and awful puns overpopulate the film like a scourge of locusts, not too deep to truly disable the films capacity to be great, but enough to dampen its potency somewhat. 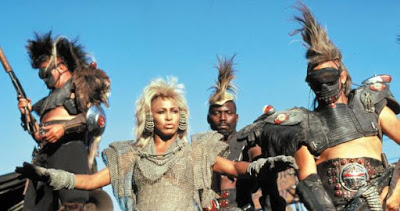 They should leave the puns to me, where I can handle them safely and responsibly, with a mane-imum of casualties.

But despite its lumpen tonality, Beyond Thunderdome is still a Mad Max picture, and as such it revels in its weirdness. The film throws itself into its aesthetic, which contains a couple more dreadful matte paintings than I daresay we're used to, but is still as electric and iconic as ever. There might be a couple dozen more monkeys than usual, and some of the characters would be more at home in a Western from 2 of the 3 writers of Scary Movie, but it occupies exactly the same maniacal space that makes the Mad Max films so special.

The costume designer works with the delirious ferocity of a heroin-addicted crack rock, tossing several be-mohawked leather daddies, a dwarf with a Noh mask backpack, a mechanic in a leather speedo, and just about everything that was available on short notice from the costume department of the damned. 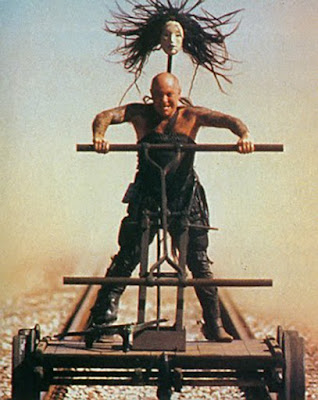 Now Appearing in: Your Nightmares.

The most interesting thing about Beyond Thunderdome is that, perhaps because it is already doing so much, it also has the most to say out of the Mad Max trilogy. Behind its juvenile nonsense and crackling action sequences, the film is an allegory about the future and how we shape it. The future of yesterday (ie. glittering skyscrapers and a metropolitan utopia) is gone, and it is up to the children to find out what's next for humanity.

Bartertown has its own rough-and-tumble semblance of society, but those irradiated adults are the product of the same culture that destroyed itself in the first place. Their moral decay is no surprise to anyone, but The Lost Boys/Girls are wholly new. They know nothing other than the wasteland, and they alone hold the last spark of hope for humanity.

Mad Max might be their savior for the time being, but they're the ones who - if anyone can manage to do it - can heal the world. He's just a visitor. They don't need another hero, because there's nothing left to save. And that's beautiful.

Also, I bet you didn't think I could work that lyric into a thoughtful analysis.