Looking For The Magic 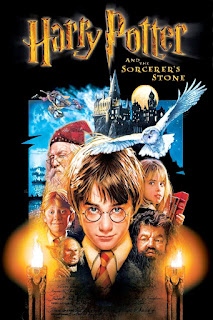 As both a self-respecting movie blogger and a human born in the mid-90's, there has been a glaringly egregious gap in my review history: the largest cultural phenomenon of the millennium, the Harry Potter franchise. Now, I hadn't rewatched any of these films or reread any of the books since the release of the final entry in the franchise in 2011, so it is from a relatively fresh, newly adult perspective that I approach these films, making this marathon - I hope - all the more interesting.

I will always carry a deep and abiding love for Harry Potter in my heart. How could I not? His presence has defined my entire living memory. But I'm going to attempt to come at these films on their own terms, separate from my inner child's feelings on the matter. And let me tell you, nothing prepares you for the cold, hard truth behind beloved childhood films like a double dose of Chris Columbus. 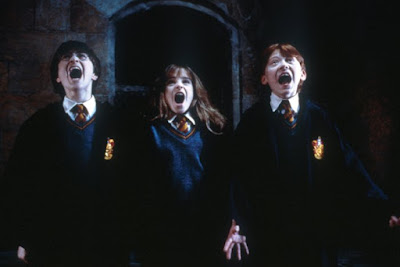 It's really not fair to subject children to this kind of torment.

Harry Potter and the Sorcerer's Stone, in case you are a baby who has not yet learned to read, is about one Harry Potter (Daniel Radcliffe), an eleven-year-old boy in the care of his despicable aunt and uncle, who discovers that he is a wizard and is summarily carted off to the Hogwarts School of Witchcraft and Wizardy. There he learns that he is the only known person to have survived an attack by the dark wizard Lord Voldemort (played for the time being and without distinction by Richard Bremmer), who killed his parents when he was a baby.

During his first year at Hogwarts, Harry befriends Ron Weasley (Rupert Grint), a boy from a low income wizarding family, and Hermione Granger (Emma Watson), a somewhat bossy girl who excels at schoolwork. In between their lessons, they discover that Hogwarts is currently the hiding place of the philosopher's sorcerer's stone, a legendary MacGuffin that creates the Elixir of Life and which Voldemort desperately wants. They suspect that their wicked potions professor Snape (Alan Rickman) is plotting to nick the stone from the school, right under the nose of the wise and powerful headmaster Albus Dumbledore (Richard Harris).

Also, why did publishers think that American brains would melt upon seeing the word "philosopher"? That's not an unheard of term over here. It's not like pretentious undergraduates are tramping around signing up for sorcery majors. We get it, guys. And actually, Nicolas Flamel was an alchemist, so screw all y'all.

The Sorcerer's Stone is different from the book. That is fine. I don't mind my cinema being different from literature. They're two different mediums for a reason. I'm just telling you all this so when I complain, it won't feel like useless nerd rage.

While the film cuts large swaths away from the book's plot left and right, it ironically completely fails to trim the fat. The end result is a story that zooms from beat to beat with a machine gun clatter, often dawdling pointlessly for twelve seconds at a time on unjustifiable plot points like the birth of Norbert the dragon (whereupon he is immediately shipped offscreen and hardly mentioned again), a transfiguration lesson (which is merely an excuse to repeat an effect we've already seen before), and the introduction of the Hogwarts ghosts (perhaps the most shameless and irritating fan pandering, because they instantly vanish from the film and they have the gall to not even include Peeves).

In their blind fury to slam every possible moment from the book into the audience's eyes, Columbus and screenwriter Steve Kloves forget that they're supposedly making a self-contained narrative film. Imagine, if you will, that a movie is an intricate wedding cake, holding itself elegantly in delicious harmony. The Sorcerer's Stone is more like a pile of jagged fondant shrapnel with a dozen mismatched figurines jammed in at odd angles. 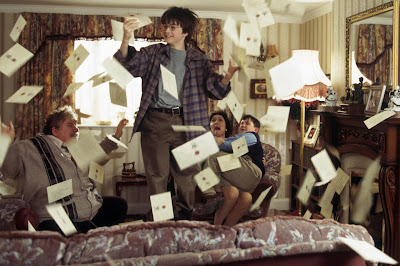 Metaphors are hard. Segues are harder.

There is some really wonderful stuff in Harry Potter and the Sorcerer's Stone. I'll close with that, so I leave you all with the feeling that maybe I'm not a grouchy old codger. For the time being, let's continue complaining.

There is a moment, and it is very early in the film, where the technical side of things goes completely off the deep end. It does not stay here for long, but the effect lingers for a great deal of time as it wades back to more navigable waters. I speak of the "cabin in the sea" scene, in which, for no apparent reason, the 180 degree rule as well as all laws of continuity editing and location geography are shot in the head and dumped into shallow graves. The camera goes haywire, jumping back and forth like a deranged chipmunk and never adequately displaying the scene to any degree.

Aside from that brief patch of gibbering insanity, the film is otherwise technically sound (including some early 2000's CGI that comes off a bit blocky, but is hardly distracting and it's still better than Jupiter Ascending), though it does tend to feel a little stuffy and stagebound, lacking the expansive open-world feel of the later sequels.

Masterpiece Potter, if you will.

Here's where my mood begins to improve. The performances, largely culled from the highest grade talent available across Britain, are remarkably superb for a children's film. Alan Rickman and Maggie Smith are the perfect choices for their respective characters, taking the film seriously and bestowing their roles with a profound sense of gravity. Richard Harris with his wheezy otherworldliness, Robbie Coltrane with his rugged good cheer, and Warwick Davis with his being Warwick Davis all round out the adult cast quite nicely.

The only liability in the acting is the children, which is naturally to be expected. Radcliffe does a fine job, though he utterly fails to convince when he is supposed to be feeling pain in his scar. Intimate understanding of pain like that doesn't happen until puberty. And Rupert Grint has some natural comedic talent, though he doesn't get so many opportunities to show it off this time around. Emma Watson is the weakest link thus far, but her overly-recited lines don't contradict her character so it's not distracting in any way.

All in all, things could be a lot worse on the kids' end and it's almost impossible to be better on the adults' end (*cough cough Michael Gambon cough*).

Yay! I was mostly nice for two whole paragraphs!

Alright, now that that's out of our systems, it's time for the effusive fan praise. First off, John Williams' score and especially the iconic "Hedwig's Theme" is just superb, capturing the magic and wonder of this new world with a soaring heart. It's not so overdone as some of his more recent scores, utilizing a minimalist melody and orchestration to capture an unforgettable whimsical tone. Its use in the film isn't always perfect, and it's overplayed at some points making some minor scenes self-consciously epic-sounding (Harry's going to the broom cupboard, not to war), but the score itself is an undeniable masterwork.

The other unimpeachable aspect of the film is its production design. The layout of Hogwarts castle has not yet reached its zenith, but the interiors are uniformly cluttered, lived-in, and supernaturally in tune with the mystery and majesty of the wizarding world.

It is not Harry Potter in its best form, but it lays a solid groundwork for the truly wonderful things to follow. Really, it's a fine film to begin a franchise with. But only (and here's the clinches), only if you've already read the book. You need that handicap in order to decipher the incomprehensible mass of plot that the film vomits up in its middle half. But other than that, hey, good job.