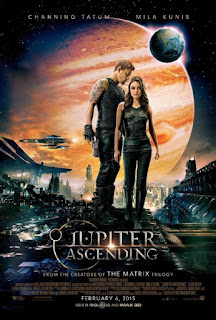 The Wachowskis' second film, The Matrix is an incredible sci-fi action movie, mixing theology, weird science, and modern computer analytics into a heady concoction of modern cinema. Their newest feature, Jupiter Ascending, combines many of those same elements into a garbled, nondescript mass of pixels. Sometimes people should quit while they're ahead. 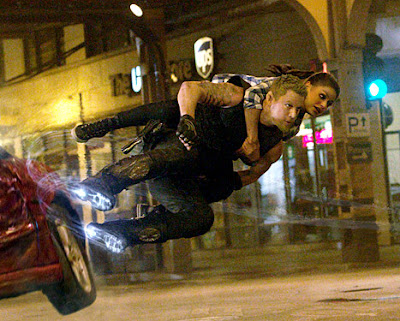 I would say "quit before they put Channing Tatum in antigrav rollerblades," but that's a bit  too specific.

At the very least, Jupiter Ascending means well, and we can't fault it for that. Telling the story of Jupiter Jones (Mila Kunis), the daughter of a Russian immigrant who was born over open water and thus without a country, who discovers that she is the reincarnated spirit of a space queen, the film attempts to cover important issues regarding racism, environmentalism, capitalist greed, and universal morality. What it ends up being is a dour romantic comedy tarted up as an overwrought space opera, and we can fault it for that.

Jupiter discovers that her DNA sequencing is exactly the same as a murdered space monarch, who belongs to a family that worships genetics and owns planets, harvesting their populations to create an elixir of immortality. If that sentence was hard to get through, imagine being pummeled with it for 2 hours and 7 minutes. A variety of side-switching and double-crossing ensues, but what the plot boils down to is that the evil Balem Abrasax (Eddie Redmayne) wants to prevent Jupiter from inheriting his mother's title, which includes the Earth - a planet he is keen on harvesting. With the help of space cop/wolfkin rogue Caine Wise (Channing Tatum), Jupiter needs to play the intergalactic game of thrones until she either wins or dies, saving the Earth in the process. 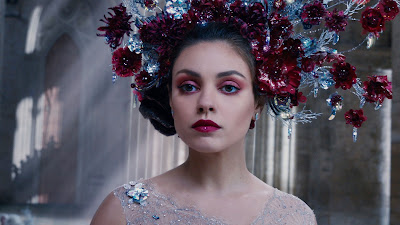 Did that make sense? No. Do I care? No. I'm just trying to do justice to what it was like to watch it.

Jupiter Ascending is spectacularly muddled, tossing in unexplained plot points at random and attempting to smooth them over with patently ridiculous pseudo-science. Honestly, it sounds campy and fun enough: the Russian mob, magical bee powers, and genetic reincarnation all flit across the screen during the course of the story's tenure. But the real problem with the film is that it plays all of its weirdness out with deadly serious intent.

The difference between the film that Jupiter Ascending wants to be and the film that it is is staggering. Anything exciting or pulpy is smothered with unending, piteously hopeless feints at drama and profundity. It's a perpetual motion machine of self-important mediocrity. 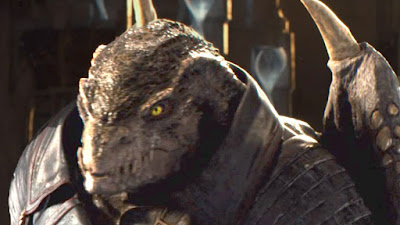 Kind of like how Hollywood convinces itself that this type of CGI is "totally cool" and "definitely believable, keep up the good work."

Plot points unfurl at random times from inscrutable angles, only to vanish before you can focus your eyes on them.

The monochromatic color scheme grates against your vision, preventing you from being able to discern anything other than vague motion and then abruptly lurching into hideous, searing teal and orange because that's how movies are supposed to work, right?

Eddie Redmayne can not pull off his bargain basement Charlize Theron impression, Channing Tatum proves beyond a shadow of a doubt that he's infinitely better suited to comedy, and Mila Kunis somehow manages to escape making any kind of impression at all.

All the action scenes incessantly repeat the same three tricks ad nauseum like the film is being played on an Atari joystick, and the major climactic scene of the film is repeated in the exact same way immediately after. It's a grinding, churning bore with some truly embarrassing CGI and color grading. 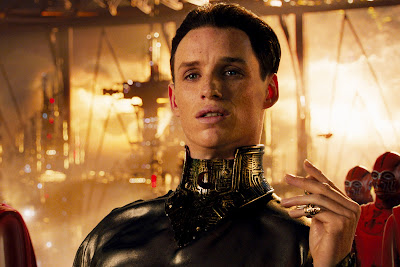 There's enough effort and genuine personality poured into it that it's not a complete waste of time at any level, but there's no getting around the fact that it's damn near unwatchable as a narrative film. I would not recommend Jupiter Ascending to any casual film fan, unless their goal was to intimately understand the arrhythmic beating of the Wachowskis' collective heart.

In that regard it is a damn humanistic masterpiece. In anything else, it's an overbaked trifle that is better swept under the rug.