Census Bloodbath: A Cry In The Dark 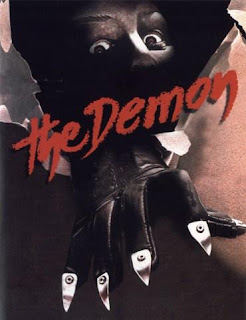 According to the plot description of The Demon, which was shot in South Africa in 1979 but released on US video in 1981, the malevolent killer can "bring your worst fears to life." The only way I can see this being accurate is if your worst fear is having to watch an acutely crappy slasher picture. 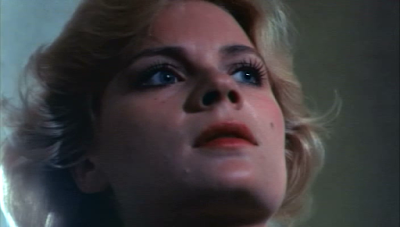 This is gonna be one of those reviews. All the pictures I can find are either stupefyingly dull or severely degraded. The Demon is not, shall we say, a classic.

The Demon consists of about two and a half plots, none of which are linked with any sort of connective tissue other than the presence of a shadowy killer (who isn't even credited, so I have no idea who played him - it seems like even the filmmakers themselves didn't particularly care for this movie). The first (and least interesting) plot follows the Parker family. When their fourteen-year-old daughter Emily (Ashleigh Sendin) is abducted by the demon, her parents hire Colonel Bill Carson (Cameron Mitchell of Blood and Black Lace, Memorial Valley Massacre, Bloody Movie, and Night Train to Terror - the man's a trouper), a detective with ESP to help find her.

Mainly his investigation consists of groaning asthmatically, sniffing pillows, and ripping apart bedclothes while the score feebly bleats behind him, then going off to overact at a dull, grey ocean which the film cuts to every ten minutes or so despite the fact that it plays no significant role in the film's plot or geography. As one can expect, this method accomplishes exactly nothing and he is shot in the head before he can even find the killer. This storyline connects with the second, considerably more interesting plot at exactly zero points.

Let's move on from that hot mess, shall we? Young schoolteacher Mary (Jennifer Holmes) is living by the city with her eighteen-year-old cousin Jo (Zoli Marki), having romantic misadventures while occasionally seeing a creepy figure appraising them from outside the windows. Mary is in a long-term relationship with the charming but unfortunately be-mustached Bobby (Mark Tanous), but Jo is embarking on a newfound romance with Dean Turner (Craig Gardner), a woefully rich trust fund stud who she is teaching how to be a better person.

This romance is genuinely sweet and, compounded with the terrific chemistry Marki maintains with both Tanous and Holmes, brings the film within a hair's breadth of being actually watchable. 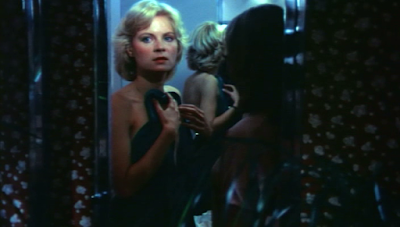 Also, The Demon has no qualms about showing its female leads topless, if that's the kind of thing you're into.

The rest of the film is made up of scenes depicting the killer's perilously underlit antics about town, doing things we can't see to people we don't know or care about, and being generically evil, doing pushups and ripping up magazine centerfolds. The killer, more than anything, is where The Demon well and truly falls apart.

His scenes are awash in blackness, probably intended to create a mood like "ominous dread" but only managing "I accidentally left my sunglasses on and it's past 8PM." His scenes thus become a messy confused jumble, like "Did he just punch a motorcyclist? Is that white blob in the corner of the frame his face? Who are these men he's slaughtering in a stairwell? Are they gangsters? Avon employees? Did he kill them or adjust their bow ties? Are they wearing bow ties? Who am I?"

The film attempts to explain the menace, shoving broad soliloquies on the topic in Cameron Mitchell's mouth, but all we get out of him is the fact that he's an aberration of the species and he likes bright lights, apparently. Not to mention that the way he is explicated is on a completely different spectrum from how he actually acts. He is painted as a ghoul of darkest night, harnessing your fears and using them against you, but all he seems to do is bumble around in the dark with no motivation or personality, arbitrarily acting upon his unfortunate tendency of smothering people with plastic bags. 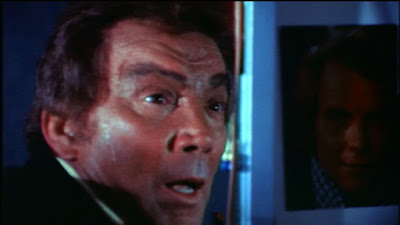 To be fair, maybe this movie is an in-depth, probing exploration of people whose deepest darkest fear is plastic bags, in which case I have not given the film enough credit.

In short, The Demon is inept as all hell. Side characters are introduced and frequently cut to with absolutely no payoff, Emily's skeleton is found hanging in a tree but that scene does not inform any of the moments that follow, and the musical accompaniment is slack, occasionally letting out a feeble toot when something really important happens. It's dull as seaweed; an underlit, tiresome slog.

But then there's Jo and Mary. These two girls are characters who seem like they've been transplanted from some other, better movie. Maybe a scrapped sequel to He Knows You're Alone or something. And their final scene is a cracking good time, with Jennifer Holmes selling a plot point that sends her careening topless through an attic before carving a poncho for herself out of a shower curtain. With this, the film reaches a heretofore underserved campy register before alighting upon the best scene in the film, as she utterly destroys the killer using household bathroom supplies.

This strange, action-packed, astonishingly awesome scene (along with the spurts of keen romance scattered throughout) in no way makes up for the doldrums of the previous 75 minutes, but it makes The Demon a curio I'm not too keen to let go of.

Killer: The Demon (Who Even Knows)
Final Girl: Mary (Jennifer Holmes)
Best Kill: Mary locks herself in the bathroom, squirts soap all over the floor, and sprays the killer with an adjustable sink head when he breaks through the door. He slips on the soap and she stabs him in the neck with scissors. This is awesome.
Sign of the Times: Jo wears what appears to be a termite tent on her hot date. 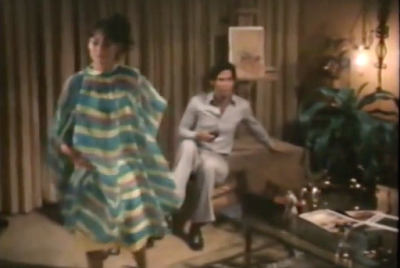 Scariest Moment: Mary is chased through her house by the killer after discovering her cousin's dead body.
Weirdest Moment: A scene takes place in a roller rink named "Boobs Disco."
Champion Dialogue: "I promise I won't let him ruffle my fur until he's given me a bank reference, financial statement, and his credit rating."
Body Count: 10
TL;DR: The Demon is a dull, inept trash slasher redeemed only by a genuinely sweet romance and a stunning Final Girl.
Rating: 3/10
Word Count: 1165
Also sprach Brennan at 1:00 PM