Fright Flashback: They Made A Third One?

Welcome back to Fright Flashback, where *ahem* "every" week until the end of summer we will visit an older horror film that is in some way a spiritual precursor to an upcoming new release. This week we are were anticipating Insidious: Chapter 3, the third entry in a non-R-rated haunted house franchise. In celebration, we'll be revisiting Poltergeist III, which reached that point in its own franchise about two and a half decades earlier. 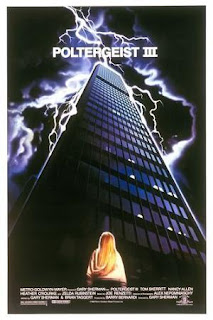 1988 may have been the perfect year for a Poltergeist sequel. The original film was so iconic and intensely personal (though to whom it was intensely personal is up for debate. *cough cough Spielberg*), that its inevitable followup necessarily lacked it luster and thematic appeal. So there MGM was with a horror franchise already run into the ground thanks to a perilously dull second part, while meanwhile Freddy and Jason were racking up body counts in the hundreds and box office receipts in the millions.

In order to keep their property afloat, they upped the ante. And, seeing as this was the late 80's, that means pure lunacy. They transplanted the story to a Chicago high rise, boosted the body count, and pulled out all the practical effects that not very much money can buy, draping everything in fashions so untowardly ridiculous, they went out of style the second principal photography shut down. Maybe even the second the costume designer stepped out of the department store with their credit card in hand. 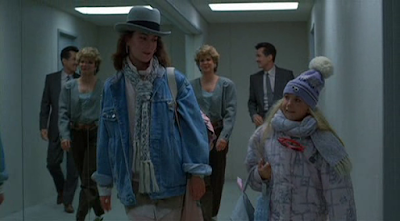 Each individual layer of that outfit doesn't even match itself.

This oddball approach to the story gave it just enough juice to cap off the trilogy on an exciting and lasting note. Thank you, 1988.

Poltergeist III puts Carol Anne Freeling (Heather O'Rourke) in the custody of her Aunt Pat (Nancy Allen) and Uncle Bruce (Tom Skerritt), because sometimes successful adult actors don't want to return to a horror series for a third time. Carol Anne has been enrolled in a school for child prodigies which is headed by the wicked Dr. Seaton (Richard Fire), who believes that the ghosts haunting the young girl are a result of a mass hypnotic suggestion perpetrated in a desperate bid for attention. The fact that he firmly believes in hypnosis but not ghosts is but the smallest logical leap the plot makes. They's starting us off easy, you see.

When Carol Anne is left alone with her cousin Donna (Lara Flynn Boyle) during her aunt's art gallery opening, Donna ditches to go to her crush Scott's (Kip Wentz) party downstairs, leaving Carol Anne alone with the ghost of Reverend Kane (Nathan Davis), who is inhabiting the mirrors and has taken supernatural control of the building. When Donna, Scott, and Carol Anne are sucked into the mirror dimension, Pat, Bruce, and Dr. Seaton (who is also Scott's father) must team up with the medium Tangina (Zelda Rubinstein) to put an end to this haunting business once and for all. 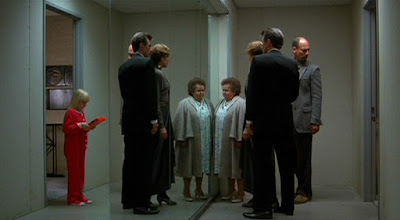 Honestly, I wouldn't mind if that awful red jumper got banished to the shadow dimension.

First and foremost, the practical effects that went into the mirror work is stunning. They're not quite as extravagant and state-of-the-art as any individual effect from the first film, but they're admirably timeless. They don't show any seams because they don't have any.

The other special effects are likewise pretty consistently superb, though there are a few minor slip-ups, especially when it comes to recreating Kane. The original actor, Julian Beck, died of stomach cancer in the middle of shooting Poltergeist II: The Other Side, and the film's feeble recreation of his chilling, gaunt face looks no spookier than an old potato.

In addition to having a generally more consistent pacing than Part 2 when it comes to showcasing special effects, some of the gags in the film are pure nightmare fuel. Only read this if you've seen it or have absolutely zero interest, but in moments like when [Donna bursts screaming from Tangina's shriveled corpse], Poltergeist III transcends from being a kooky special effects thrill ride to a balls-trippingly horrifying hell dimension. 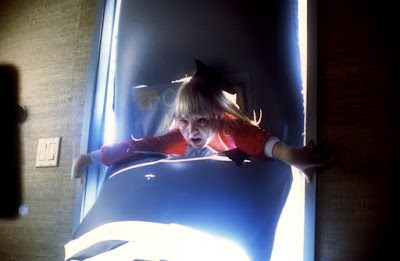 Although this is all terrific, there was a trade-off made when the Poltergeist franchise finally succumbed to the influence of the 80's. In exchange for zanier fashions and a more consistent, creepier effects palette, the film had to sacrifice depth. The original Poltergeist had a novel's worth of comments and criticisms on the state of American suburbia and the sequel, while dull, at least attempted to follow in its footsteps.

While Poltergeist III does have some interesting material to chew on in the form of the high rise building containing everything a person could possibly need so they never have to leave a single building (home, jobs, shopping, and dining - it's the ne plus ultra of comfortable suburbia hidden within the city), the idea of distant relatives being reluctantly incorporated into a loving family, as well as the possibility that Carol Anne might accidentally be creating the ghosts within her own imagination, it just doesn't have anything matching the level of analysis of the previous films. There are some terrific raw elements in there, but they aren't synthesized into anything particularly meaningful.

Rather, the film favors a series of abrupt stop-and-start plot beats that play second fiddle to the terrific and sometimes bone-chilling effects. One minute, Aunt Pat is begging to ditch the Evil Little Brat, the next she is proclaiming her undying love for her. One minute Tangina is soliloquizing about some nonsensical Power of Purity or some such, the next she's appearing in a cloud of water, tossing magical necklaces about like she's Oprah and giving cryptic advice. It's all a fascinating jumble, but it ain't classical storytelling.

The power of Poltergeist III lies in its ability to be a stunning jack-in-the-box without the subtext. That's why it'll never be a classic like the original. But at least it sloughs off the dreary monotony of its immediate predecessor in favor of a thrilling roller coaster ride. You won't catch me complaining about that. 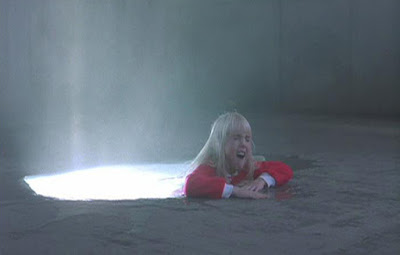 So, yes. This movie has flaws. A great many of them, in all honesty, including the fact that it doesn't make full use of the opportunities presented by its setting and that, if you're not a fan of people screaming "Carol Anne!" then this movie isn't for you. I have it on good authority that her name is repeated 121 times throughout the film, and if you cut out every line that's reiterated two times or more, Poltergeist III would be a short film.

But! But! The cinematography is daring, at times reminding me of Shock Treatment, which is secretly high praise, considering that film's penchant for wrenching terrifically ambitious shots out of a staggeringly low budget. And director Gary Sherman coaxes far superior performances out of O'Rourke and Rubinstein, leaving the limp Poltergeist II dead in the water.

And once more, I'd like to remind you that this film is a living catwalk of the apocalyptic anarchy that was taking hold of the fashion market in 1988. Nobody is safe from the denim jackets, pastel scarves, garish costume jewelry, neon eye shadow, and towering piles of crunchy, starched hair that you could snap off and pick your teeth with. It's daring, it's bold, it's pandemonium. And it's glorious. The scenes with the teenagers are like a cross between a Go-Go's music video and the first act of a slasher, all perfect chemistry and terrible pattern clashing. It's a wonderful treat, and Poltergeist III is better for it.

It's not a well thought-out movie, no. But it's so unabashedly fun and has such surprising skill behind its construction, it deserves a place in the pantheon as one of the better sequels to come out of the back half of the decade. Don't let this one pass you by.