Census Bloodbath: Cannes You Dig It? 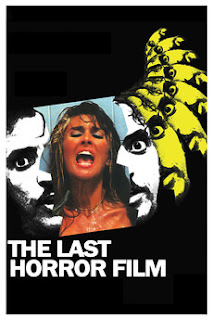 I don't know what I was expecting when I sat down with The Last Horror Film. Maybe I was expecting The Last Horror Movie, which is a totally different film from the early 2000's. It certainly wasn't something good, given the introduction from Lloyd Kaufman before my copy of the movie that informed me that this was distributed by Troma Entertainment. But whatever it was I was expecting, it didn't come to pass when all of a sudden splayed across the screen was a surreal meta-horror that reteamed the leads from Maniac in footage shot guerrilla-style at the actual Cannes Film Festival in 1981. 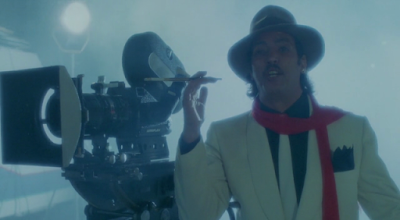 It's like Escape from Tomorrow, but not pretentious and unbearable!

So. Vinny (Joe Spinell, of the aforementioned Maniac and also Cruising, so he's never not been sweaty in 80's slasher movies). He's a cab driver with dreams of becoming a big shot Hollywood director, so he saves his money and buys a ticket to Cannes, where he stalks movie star Jana Bates (Caroline Munro, who spun her appearances in Maniac and The Last Horror Film into a mini scream queen run that also included Slaughter High and Don't Open Till Christmas - and whose hair in this movie looks like a skunk got electrocuted on her head), who is there for the premiere of her new movie, titled (and I'm not kidding) "Scream". The people who prevent him from accessing her all meet mysterious deaths at the business end of a variety of sharp instruments. 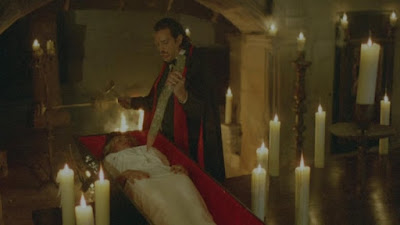 Spoilers: He does eventually kidnap her and force her to unwillingly play a part in a Dracula movie he has outfitted in a French castle, and if the directing doesn't work out, he might just have a future in set design.

There's a lot going on with The Last Horror Film, which is good news because the plot is the barest thread of gossamer. First off is the sheer pleasure of getting to visit Cannes in 1981 around the edges of this silly slasher movie. The beauty of this style of filmmaking comes both in its inherent realism and the fact that if you ignore what's going on in the middle of the frame, it might as well be documentary footage of a bygone era. This is aided by the inclusion of the ripped-from-the-headlines real events of John Lennon's recent murder by a fan and John Hinckley Jr.'s attempt to assassinate the president to impress Jodie Foster, both of which foreshadow the film's plot bluntly but effectively.

Second off is the soundtrack! After a ripping opening with Depeche Mode's "Photographic" (which probably cost more than the cast's salaries combined), we get a glorious arrangement of pastiches of every popular early 80's genre provided, weirdly, by Jesse Frederick, the guy who wrote the theme songs for Full House, Family Matters, and Step by Step. Speaking of the astonishing pedigree of the filmmakers, this was directed by David Winters, whose career took him from playing A-Rab in West Side Story to being the choreographer of The Star Wars Holiday Special to producing Killer Workout, so don't say people can never change.

Third off? There's a vein of surrealism that runs through this film and is absolutely captivating. Joe Spinell takes his work from Maniac and pitches it to the rafters in a series of bizarre fantasy sequences where he envisions an alter ego who's a slick film director and constantly mocks him. Sound and image seem to slip past each other and blur together in these fantasies, which get more and more bizarre, at one point showing Spinell as a stripper onstage in a bra and panties, which is one of the most special sights that cinema has ever given me. 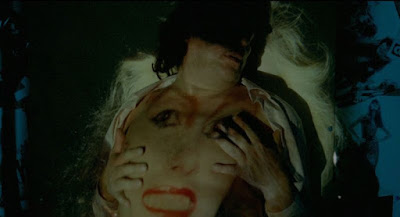 Whatever is happening here is a close second.

The Last Horror Film is like Maniac tried to market itself as a warm and fuzzy comedy and got lost somewhere along the way. It's bizarre, surprisingly effective (Spinell's intensity sweats out of him, and it's glorious to witness), and the kills are even decent! There's no work at the level of Maniac's Tom Savini (which could hardly be expected from anybody who's not... Tom Savini), but there's a gag where a severed head splashes into a bathtub that I can't describe any other way than delightful. And while a lot of the other in-film kills are in silhouette or shadow (there are a couple more intense ones displayed in movies screening at the lightly fictionalized Cannes - in real life none of the French people would give half a shit about these shitty horror pictures), the actors sell the intensity well enough that they still hit a nerve.

My experience with this movie was wholly engrossing and entertaining in a way that I never thought could have happened this deep into 1982. It's far too weird to have penetrated far beyond the 80's in the public imagination, sadly, but it's exactly the kind of semi-precious gem I created this project in order to stumble across. It's no masterpiece of the form, certainly, but it's going for the brass ring. It only gets a finger on it, but it still sticks the landing, and who could blame it for that?

Killer: Bret Bates (Glenn Jacobson)
Final Girl: Jana Bates (Caroline Munro)
Best Kill: Suzanne's death itself is by gunshot, which is not, what you want from a slasher movie, but afterward she falls from the roof of a building and smashes her head open like a watermelon. So, y'know. Pretty cool.
Sign of the Times: Literally every movie poster displayed in the Cannes footage (The French Lieutenant's Woman! Polyester! For Your Eyes Only!).
Scariest Moment: Vinnie bursts through the window of Jana's bathroom while she's showering.
Weirdest Moment: When a kid is looking up at an airplane with a banner hanging from it, he drops a piece of cake between the breasts of a topless sunbathing woman.
Champion Dialogue: "Every side of your face is the best side."
Body Count: 6; although numbers 1 and 3 take place in films within the film, which in and of itself is in another film, so why split hairs?
TL;DR: The Last Horror Film is thin, but only in plot, and who really needs one of those in a slasher anyway?
Rating: 7/10
Word Count: 1100
Also sprach Brennan at 8:08 AM