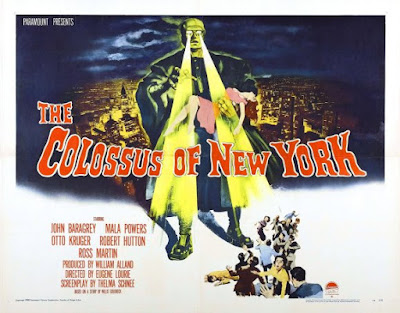 Now, I'm sure you're sick of hearing about slasher movies by this point in the month, so why don't we give ourselves a bit of a palate cleanser with our 7th Annual Great Switcheroo with Hunter Allen of Kinemalogue. Once again, as we have every October since 2014, I have assigned him three 80's slashers (reviews forthcoming, keep an eye out) and he has assigned me three 50's science fiction movies. I am always eager to explore the wet and wild world of humanity's terrible fear of scientific progress (and also aliens), so I thought I'd launch into the project starting with the film I knew absolutely nothing about beforehand: 1958's The Colossus of New York. 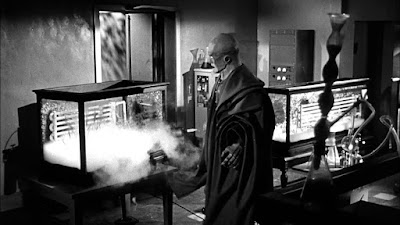 The one thing that the 80's slasher and the 50's sci fi really have in common being that you absolutely cannot trust the poster to describe anything you are about to witness in the movie.

Even for a low budget B-picture, The Colossus of New York has an astoundingly small cast. We mostly deal with the family of humanitarian inventor Dr. Jeremy Spensser, whose heat-sensing detector device and frost-resistant produce strains are on the verge of ending world hunger and have earned him an International Peace Prize, to boot. I guess Nobel refused to have their name attached to a movie about a robot with laser eyes. But we'll get to that. When returning home from the prize ceremony with his wife Anne (Mala Powers) and son Billy (Charles Herbert of The Fly), he is struck by a speeding truck.

Not wanting to have his huge genius science brain go to waste, his father William (Otto Kruger of Dracula's Daughter), a talented brain surgeon, ropes in his reluctant brother Henry (John Baragrey), who is already moving in on Anne, to help him create a robot body in which to implant Jeremy's brain. Of course, stripped of his human vessel and the divine spark of life, his brain lacks empathy and turns inhuman, deciding that world hunger can only be ended by murdering a bunch of people, going on a laser-eye murder spree throughout what we'll be extremely generous and call New York. 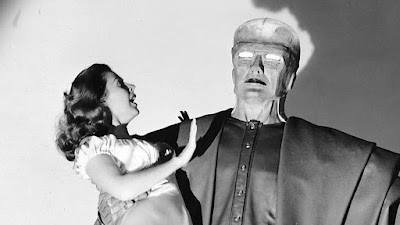 Oh, also the robot looks like this, because they did not consult a woman once during this whole process. Or maybe he secretly hates his son?

OK, so let's get down to brass tacks. The Colossus really isn't much of a colossus. Sure, he's a big ol' robot, but there are definitely NBA players taller than him. He's not knocking down buildings Godzilla-style. Not that there are any buildings to speak of anyway, considering that the only outdoor set is a matte painting riverfront. So no, the film completely and utterly fails to live up to the promise delivered by the poster, but we were at least prepared this time!

And here's the thing. From my seven year experience with these films, I was fully expecting an hour of talking about brains and the Divine Spark and ten minutes of Colossus rampage before credits. Blissfully, even though the Colossus could certainly be more colossal, we do get a whole hell of a lot of him throughout. And folks, he is fucking terrifying to behold. Whatever impulse led Jeremy's father to craft him as a cross between Boris Karloff's Frankenstein and Vision from the Marvel movies draped in Obi Wan Kenobi robes was certainly a misguided one, but it provides many a tingle up the spine.

The creature design is just so dazzlingly weird. His light panel eyes glow with the crackle of an electric furnace, a roiling storm cloud behind his face, which is so loud that it sometimes threatens to drown out the droning, faraway voice that echoes from his slack mechanical mouth. It's uncanny and really highlights how truly inhuman this character has been forced to become.

Robby the Robot this ain't.

Beyond the antagonist design, I can't say I cared for too much about this movie though. We're obligated to spend a lot of time with the various other figures of the Spensser family, and none of them really do much to catch the eye, and their philosophizing about the Soul vs the Body is a shade too Christian-y for me to really sink my teeth into as a solid theme. Really the only thing in any way interesting about the family scenes is how poorly any moment with Billy has aged.

I'm not talking about the stiff, shrill child acting. I mean the fact that every grown man seems to have a moment with Billy that would make even the densest screenwriter in 2020 think, "hey, maybe there's something wrong here." Maybe Billy's robot father shouldn't tell him to "push harder" on the lever meant to shut him off, which is located within the folds of his robe? Maybe he shouldn't approach him from the shadows of a forest and promise that he'll get a reward if he's good? Maybe Henry shouldn't come home saying he has a surprise for Billy, making him search through Henry's pockets to find it? Perchance?!

I guess we can put that in as a another win for the "horror" column though. And really, as thin as almost everything in the movie is (including that beautiful little slip of a run time), it wrings so much genuine dread from its central character that you don't even miss that he's not stomping around climbing buildings like King Kong. Mostly.

TL;DR: The Colossus of New York has an eerie creature design that tips it just over the edge into enjoyable.
Rating: 6/10
Word Counter: 1150