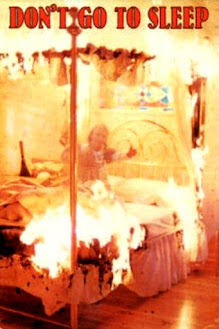 Year: 1982
Director: Richard Lang
Cast: Dennis Weaver, Valerie Harper, Robin Ignico
Run Time: 1 hour 33 minutes
TV movie slashers aren't all bad. In fact there are a few I like a considerable amount, like 1981's Dark Night of the Scarecrow and Fantasies, which we covered late last year. But for every one of those, there's an insipid affair like Hotline. It's a mixed bag, but the horror collective group mind seems to have minted 1982's Don't Go to Sleep as a classic of the form. Unfortunately, that group in question is of the generation where they might have stumbled upon this movie on TV when they were actually a child, and the potency they remember might have something to do with those soft, malleable childhood brain tissues. 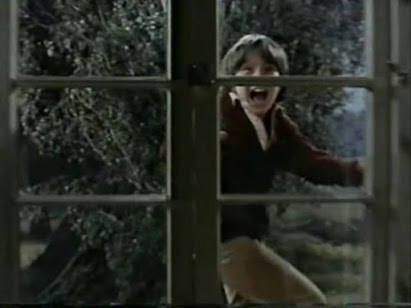 Malleable and oh-so breakable.
Don't Go to Sleep starts with a pretty generic setup. It's just not the setup for a slasher movie. It's the beginning of every haunted house tale you've ever seen. A young family is moving into a new house: mother Laura (Valerie Harper, because there's always a classic TV veteran on hand for one of these), who I can't even come up with a single character trait to describe; father Philip (Dennis Weaver, of Duel, the ur-TV movie), who is nervous about starting his new job and has a tendency to drink too much; daughter Mary (Robin Ignico), who has bad dreams; youngest sibling Kevin (Oliver Robins of Poltergeist, so 1982 was quite a banner year for him), who is a pernicious little brat with an iguana; and elderly grandmother Bernice (Ruth Gordon, who needs no introduction), a chain-smoking, blowsy firebrand whom Philip resents.
There's a member of the family I didn't mention because she's dead. Eldest daughter Jennifer (Kristin Cumming) died in a car wreck earlier that year and the family is still reeling. When her ghost appears to Mary, she starts convincing her to take out the rest of her family one by one so they can finally be together like they were meant to be. 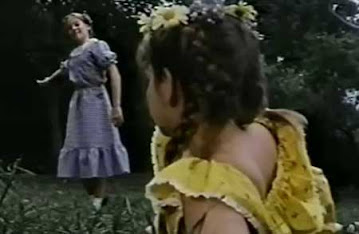 And I breathe a sigh of relief because this haunted house movie eventually gives way to a slasher so I'm not wasting my time watching it.
Don't Go to Sleep, which earns its title in exactly zero ways, isn't a bad TV movie. In fact in many ways it's quite effective. It's just hampered by the stilted, low budget nature of what it is. Especially in any scene where the family is conversing together as a group, there's not an ounce of naturalism, with each member clearly waiting their turn to say what they're supposed to say. And on the other end of the timing spectrum, there's the fact that Laura keeps demanding "answer me!" to her children, even though they were already speaking and her outburst in fact interrupts them so they can no longer answer.
But when things get spooky, like when the dolls' heads start being twisted around, or that scene that provides the indelible fiery bed image you surely noticed above, Don't Go to Sleep at least piques the interest, even if it fails to chill the bones of a seasoned horror veteran.
And there is an absolutely unique scene involving a pizza cutter that is lightly iconic, for good reason. Richard Lang, who as far as I can tell was a fairly anonymous TV director, really saw this genre movie as a chance to flex his muscles and he crams it full of unique angles and sinewy, flowing camera moves. Combine the aesthetic effort with Robin Ignicio's adorably enormous eyes that become simmering pools of pure black night when she scowls, and you've got yourself a lightly spooky tale that at least avoids being intolerably goofy despite the script's best efforts. 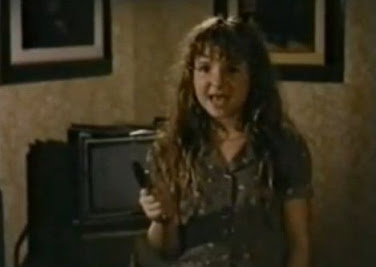 The effect her eyes produce is also helped by the fact that the VHS dub quality isn't GREAT.
But we need to talk about Kevin. Kevin SUCKS. This is not a critique of Oliver Robins, but the character himself. He's a shitty little brat who jealously guards his toys even though Mary clearly has no desire to play with them, torments his grief-ridden sister with pranks in the middle of the night, demands his dad buy him a motorcycle, steals cookies off the counter, and just plays with random loose Bunsen burners like an absolute psychopath. At least in the first half of the movie, we spend far more time with him than either of his sisters, and this is a huge liability, at least for my own personal interest in wanting to sit through the rest of the film.
And if we're being honest, anyone who isn't a little girl or Ruth Gordon isn't really worth spending time with. Any time they're alone together, Weaver and Harper have to volley back and forth some of the plummiest dialogue this side of the icebox. And while she in particular is giving a pretty solid performance, her sheer intensity brings down the mood. By combining this goofy body count thriller (with deaths involving an iguana and a Frisbee, you can't tell me I was meant to take this seriously) with the cracked psyche of a grieving mother, you just get a tonal hash that never fully comes together.
And that's before the ending that takes waaaay too long to explain a scene that is extremely easy to piece together from context clues like an hour earlier. It wasn't an unpleasant watch, but the good entirely fails to outweigh the mediocre.
Killer: Mary (Robin Ignico)
Final Girl: Laura (Valerie Harper)
Best Kill: I mean I can't say I expected to be writing the phrase "Ruth Gordon dies of an inguana-induced heart attack," so I guess it must be that one.
Sign of the Times: That stigma against therapy is veeeeeeeeeeeeeery present. Phil thinks it will reflect poorly on his parenting if his daughter goes to therapy after two of her family members have died in the same year.
Scariest Moment: Mary's bed catches fire in the middle of the night.
Weirdest Moment: There's a scene that mimics the POV shot from the opening of Halloween, except the kid is holding an iguana instead of a knife.
Champion Dialogue: "She smells like cigarettes and it smells like yuck."
Body Count: 4
TL;DR: Don't Go to Sleep is passable TV movie fare, but it could have embraced its identity as a slasher with more keeness.
Rating: 6/10
Word Count: 1097
Also sprach Brennan at 8:02 AM