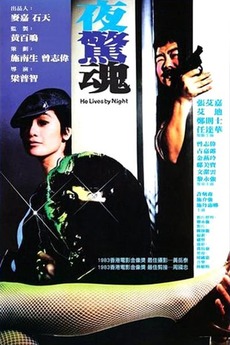 Year:1982
Director: Po-Chih Leong
Cast: Sylvia Chang, Eddie Chan, Kent Cheng
Run Time: 1 hour 27 minutes
There comes a point at the end of every Census Bloodbath year when we're stumbling through the darkest,  dustiest corners of the subgenre and find a foreign movie that is either so obscure or too old to have reliable translation services provided. That is how I ended up viewing the 1982 Hong Kong slasher movie He Lives by Night in unsubtitled Cantonese. Actually, if we're splitting hairs, it was subtitled. It's just that the subtitles were also in Cantonese, which wasn't exactly helpful.
So, as I always like to say but especially with these entries, take my review with a grain of salt. There are certainly nuances I missed by not understanding a single line spoken outside of the opening sequence, which is inexplicably in English. But, as I also always say, it's a slasher movie. It's not hard to understand even without the benefit of a screenplay. I relish these opportunities to experience a film in its purest visual form, unencumbered by the intricacies of dialogue, and He Lives by Night has a lot to dig into. 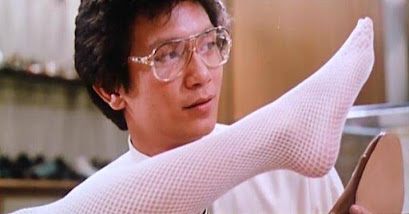 Exhibit A.
Here's the plot from what I could gather (along with what's available in the IMDb description). After a man (who the synopsis describes as a graphic designer even though he clearly works in the shoe section of a department store) discovers his wife cheating on him with a man dressed as a woman, he murders them both and takes to the streets in drag, stalking any woman he sees wearing white fishnet stockings and strangling her with said stockings. The police chief and his deputy team up with a spunky female radio DJ to attempt to catch the killer.
So, even if it's from a totally different milieu, He Lives by Night joins the grand tradition of slasher movies that depict men who dress as women as psychotic killers, nestled snugly between Dressed to Kill and Sleepaway Camp. 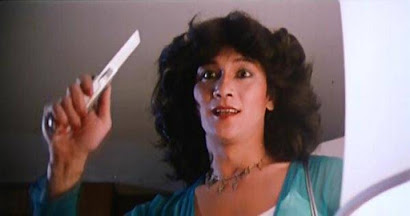 It turns out the true international language is transphobia.
It's a damn shame that He Lives by Night has that albatross hanging around its neck, because its murder setpieces are actually quite spectacular. We hit the ground running, with a woman being menaced in an alley full of sheets that have been hung out to dry, the killer's face appearing through a slash in the fabric (I would accuse this film of ripping of Tenebrae if this one hadn't actually come out first), the initial slashes from a razor causing the woman's blood to blossom against the sheets she gets tangled in while trying to escape. There's a maniacal energy to the scene that recalls early Dario Argento at his most bonkers, and the kills that follow don't lose that spark.
The murders are brutal, protracted, and really use every inch of the space they take place in. They aren't simple shocking gore gags that get in, do their thing, and get out. These scenes have stages. A woman can't simply be strangled. She must be stabbed in the leg, climb up the stairs, be dragged away, kick her foot into a fishtank in a billowing cloud of blood, topple some chairs, and then be strangled. It's daring, electrifying filmmaking that is frankly beautiful to witness. Although being beautiful to witness doesn't prevent them from being incredibly misogynistic, also like early Dario Argento. 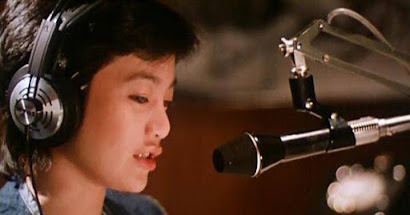 We're at least lucky that the filmmakers don't seem particularly interested in exploiting the nude female body, because those grains of salt would form a huge snowdrift at that point, burying the movie entirely.
The visual splendor of He Lives by Night isn't limited to the kills, either. In every scene, the camera is gliding and pivoting, a sinewy snaking presence that captures its story in endless, unsettling motion. And the main setpieces are well constructed, creating geographically coherent, whole spaces for the killer to chase folks around in (the finale takes place in the radio studio, a labyrinth of glass and soundproof foam that brought to mind one of the best sequences of Scream 2).
But before I get too lost in the visual sphere of the movie, I should bring up that the story being brought to life here is wacky as all fuck. It is obvious even without subtitles that this film was conceived as a convivial comedy as well as an effective stalk and slash thriller. While it succeeds on almost all counts as the latter, I think its unbridled gusto at creating the former is what gives the film it's totally unique energy. Perhaps the instinct that has cops running around in their underwear so they can't be impersonated by having their uniforms stolen or the Chief doing a full disco dance in glittery eye makeup in his apartment is the same one that creates such wickedly bizarre but effective moments as the killer chasing the DJ down a hallway by pushing a huge 7UP machine toward her at terrifying speed.
It is broad, it is deliciously weird, it is fiercely problematic, but there is truly nothing else like it. I don't know if all of that coalesces into an explicit recommendation, but I sure had a hell of a lot of fun here.
Killer: The Stocking Killer
Final Girl: The Radio DJ
Best Kill: The opening kill in the alley really is something to behold.
Sign of the Times: At a casino, a man in a Michael Jackson jacket does the robot.
Scariest Moment: When the DJ is hiding in her sound booth, the killer's face lights up on the other side of the glass.
Weirdest Moment: At a restaurant, the cops and the DJ order so many bowls of rice that they form huge skyscrapers of rice on the table.
Champion Dialogue: "Shit bitch!"
Body Count: 7
TL;DR: He Lives by Night is problematic like a lot of its slasher brethren, but it's got the deranged energy of early Argento and that serves it well.
Rating: 6/10
Word Count: 1052
Also sprach Brennan at 8:15 AM